The darkly comic story of a retired Las Vegas stage magician and big cat enthusiast, dragged back into the spotlight by the consequences of one huge mistake.

Since announcing that the funding period for the book is ending at the end of April, the response has been wonderful. And practical! Loads more people have put their names down, snapped up paperbacks and mixtapes and digital copies, so much so that we now find ourselves at 84% funded. That’s a bit close to 100%, isn’t it?

But that final chunk needs to come from somewhere. The last 16% is just as important as the first 16%. We’ll see, I guess? Fact is, pilgrims, we’re almost at the end of the road. There are 13 days left of funding at the time of writing. I am, it’s fair to say, shitting it slightly.

As always, dropping the project into conversation helps more than you realise (especially if you’re having conversations with the bored and the wealthy), and loads of you have been resolutely supportive, enthusiastic and hilariously relentless on social media - so thanks for that. It’s really working.

I’m going to be reading out a 5-minute excerpt from BDIRR at the next Novel Nights in Bristol on Wednesday 25th April. Are you in Bristol? Do you know anyone in Bristol? If so, get a load of this location-omitting flyer: 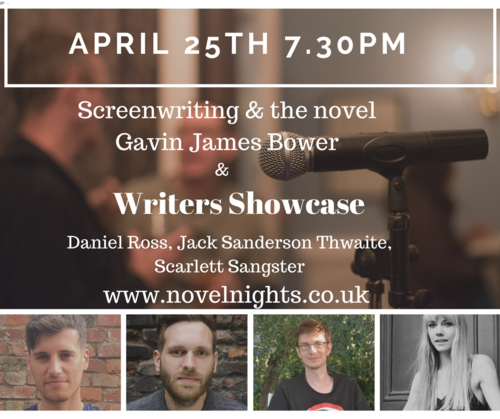 There’s lots of other people there besides me, reading stuff out and talking about how to actually do proper writing, so there’s a solid chance it’ll be excellent. Either way, it’s the last event I’ll be doing in the crowdfunding period and, as such, it’s my last chance to secure IRL pledges with actual human beings. I am not going to lock them in until they pledge but also I MIGHT LOCK THEM IN UNTIL THEY PLEDGE. Tickets here.

That was it, really. I’ll be in touch again soon as we sidle ever closer to the end of funding but, for now, I’m hoping you all get to meet Bobby very soon. Frankly, the sooner he gets out of my head and into yours, the better.

Oh, and if you’ve got your headphones in, at the top of the page there’s a song that’s DEFINITELY going on the mixtape.