Midsummer Missive, or the sighting of a mirage in the form of giant letters...

A brief update on the fortunes of my book-in-progress:

In case that's a bit too brief, here's more:

The search for the right title these past few weeks has been responsible for many finger-chewing, hair-pulling moments. As Ghosts of Chechnya doesn't sound like a thriller and may make people think the book is some kind of ghost story/documentary about Russian civil war or whatever, I've taken advice to find another title. After much agonised title hunting I had a flash of inspiration and came up with: 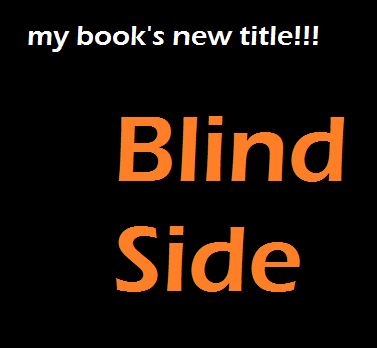 There was of course much more agonising and consulting with various people in the wonderful team at Unbound over whether this was actually the right title... but I finally finally decided it was.

I've still got to update all the cyberplaces where the old title lurks, which is taking a while owing to difficulties technical with Wordpress and general post-pre-launch party lethargy. (All went well - books were read from and given away, music was played and much wine was quaffed. Thanks to Emerald Place author Stephen McGowan, the lovely Nicola Blakey who entertained us with her viola playing and all the wonderful folks who turned up.)

This is the third title my novel has had - the first was 'Nikolai' after my Russian character, way back. Strange how odd it is to get used to a new title, not just for me. Many people have told me crossly that they like the old one much better, how dare I change it? Then again, some love the new title. For better or for worse, Blind Side is what it's going to be from now on!

I've finished my brief to the designer - talked on phone then filled in a long questionnaire and have spent hours looking at covers on Amazon. All going well, in around 4 weeks a new cover will fondly embrace my new title.. or is that the other way round? More later. Gosh, it's one thing after another with this book publishing thing :) Talking of which...

one more thing, before I forget

lt's not too late for people to get their name in the back - pledges can be made up until close to publication date. To celebrate the new title, Unbound has set up a special offer valid until the end of 22nd June (tomorrow) - enter 'BLINDSIDE16' gift code at checkout to get £5 off the book. So the basic £10 pledge is half price.

Please keep on (or start maybe?) tellling anyone about my book who might be interested - friends, family, people at the bus stop, browsers at Waterstones, fellow voters this Thursday at the polling booth... It all helps to spread the word about Ghosts - Blind Side, I mean. (Thanks goodness the referendum campaign will be over soon, and we can get back to talking about the weather.) The bigger the buzz the better. So far it's only a distant hum, Ok. But there's still time.

Hot from the Unbound vine: Fingers crossed and pinch me three times, BLIND SIDE will be published on or soon after 28th July.

Back in a while - and may your side win! [unless it's Brexit of course]

No, come back, I didn't mean to say that, really. Let's not let politics come between us.