Beginnings, endings and the long bit in the middle

First, I’d like to warmly welcome my most recent supporters, and welcome back all you wonderful people who first stepped on board with me to take this journey into the unknown. Thanks to you all, and I hope you’ll enjoy the ride - also that our little shed will survive the winter storms. Anyone else who’s slipped in for quick nose around, make yourself at home. No heckling though and go easy on the cashews.

So, pull up a chair (plastic I’m afraid) or grab a beanbag/lawnmowever/box of grass seed and help yourself to a glass of something warming. There’s a large pot of steaming hot chocolate, or as its getting dark and chilly outside you could try a slug of mulled wine or Hot Ginger Toddy (we’re out of Hot Peppermint Patty).

Now we’re sitting comfortably and before we’re all sloshed, I think I ought to say something sensible about my novel. How Ghosts of Chechnya got started perhaps, and how it was finished.

I started writing novels over a decade ago, when I realised it was the ideal way to escape boring stuff like commuting, attending meetings and trying to meet other people’s deadlines. You can lie in bed till whenever dreaming of plot twists and label it as hard work, and closet yourself in your ‘office’ all day absorbed in the world you've created. Not only that, you have the best-ever excuse to visit far-off/alluring/ill-advised places - gangster haunts, East End pubs, gambling dens, strip joints and tweed jacket-filled clubs in the smarter parts of W1 (research). Fortunately, no-one expects you to earn any money from it all, though of course you know it’s ‘real’ work because one day you might earn a packet from it (well, you never know). 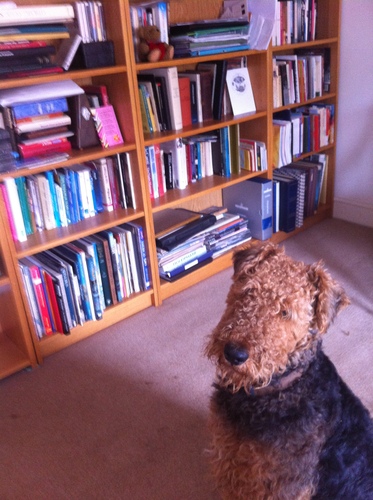 My workmate at the office

How Ghosts got started... I’ve been working on it on and off since early 2005 - also the novel’s starting point. In the ‘off’ periods I wrote two more novels and a lot of poems, published from time to time. (The prose and poetry sides of me poke and gnash at each other like fractious siblings and occasionally launch into battle.)

Rather unpoetically there was no magic moment when the story, themes and characters came to me. I can’t pretend I was on a train to Edinburgh, Vienna or Vladivostok when a handsome young Russian passed by just as the train jerked and he spilt his vodka on me, that we talked for hours and as he turned to walk away, I knew I had to write about a former conscript soldier called Nikolai.

The truth is, this novel has fermented for months in the murkier regions of my brain. Years later, I realise that its three main characters, Nikolai, Georgie and Julian, were inspired by various people I’ve known; also situations and themes in the novel have arisen, obliquely or otherwise, out of my own life. There was an early boyfriend who turned violent after I tried to break off with him and a friend who admitted he was in love with me... One of the ideas in the novel, how well one can ever know another person, has dogged me for years in various guises. While I hesitate to attribute this entirely to my father’s influence, this was certainly a rich seam to draw on.

As for how it all ended... Several months ago I declared Ghosts ‘finished’ after countless re-drafts and premature announcements to that effect, as my husband will testify. The title has changed too. It was originally ‘Nikolai’ but this didn’t resonate with early readers or seem to convey quite enough. After much agonising I came up with ‘Ghosts of Chechnya’.

Once my book is 100% funded (be positive, damn it!) there will be further edits, this time by professional editors, and no doubt further pondering (by me, anyhow) over word choices, chapter endings and the exact shade of my narrator’s hair. That’s the down side of being a (mildly) obsessive novelist; however many permutations of 90,000 words are possible, that number is never enough. And that’s why I love the glorious finality that’s possible in writing a poem. OK, some poems drag on until you want to stamp on them, and never get further than a pile of redrafts to be torn up in frustration or used to wipe the dog’s paws. Others though emerge in a furious scratching of pen on paper into something that is, inexplicably, exactly right.

For now though, pending further edits, I am wallowing in that elusive state of having ‘finished’ my novel.

Oh dear, is the time?  Shed closing time, I’m afraid. Drink up, leave your glasses in the sink and mind the wonky door.