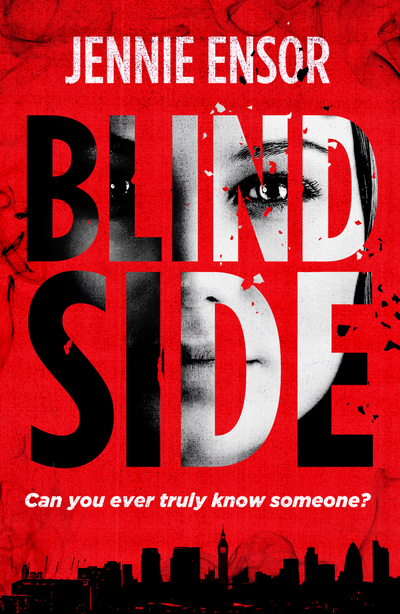 Crime | Fiction
You made Blind Side a reality. It's available in all good book stores now.
$4
7 pledges

Guided tour with author* to settings in Blind Side (in and around London, travel not included) as well as a limited edition giclée print of the cover art from Unbound's award winning designers, ebook edition and your name in the Super Patrons list in the front of the ebook.

*If you cannot attend in London for the guided tour, a video tour of the settings in and around London will be available as an alternative.

Lunch with the author, a copy of the ebook edition and your name in list of Super Patrons in the front.

A week (7 nights) in France staying in the author’s recently refurbished traditional house in SW France surrounded by stunning mountain scenery. For up to 2 people. Limited edition giclée print of the cover art from Unbound's award winning designers, ebook edition and your name in the Super Patrons list in the front of the ebook.

The story begins in London in 2005, a few months before the 7/7 bus and Tube bombings. Georgie agrees to have sex with Julian, her close friend from their university days. Wary of relationships after previous heartbreak, she is shocked when Julian reveals he has loved her for a long time but felt unable to tell her.

Soon afterwards Georgie meets Nikolai, an ex-soldier recently arrived from Russia. Despite her misgivings, she can’t resist him; Julian, jealous of his perceived rival, struggles to deal with Georgie’s rejection. Georgie begins to realise how deeply war-time incidents in Chechnya have affected Nikolai, and wonders what terrible thing the Russian is hiding from her.

Then London is attacked. In the climate of anxiety and suspicion post-7/7, Georgie must work out who she can trust and who she should fear, before it’s too late.

Blind Side explores love and friendship, guilt and betrayal, secrets and obsession. How well we can ever really know anyone? And what should we do if we find out that the unthinkable has happened? An explosive, debate-provoking thriller that confronts urgent issues of our times and contemplates some of our deepest fears.

“Jennie Ensor’s writing is graceful, poetic, intelligent and captivating. She builds suspense brilliantly, and is a master at dialogue that communicates the accents and personalities of the characters. BLIND SIDE is a wonderful debut, an exciting story about three flawed and fascinating people living in dangerous times.”

— Gail Cleare, author of DESTINED and THE TASTE OF AIR

“... a gripping tale. Whilst not the light-read that this genre usually pitches itself at,this complex tale was an immensely satisfying read.”

“For a debut novel this is a brave topic as [is] the time it is set in, but what Jennie Ensor brings is a thrilling psychological story that I really enjoyed and raced through. If you enjoy a thriller with a number of themes running through the story, then Blind Side is one not to be missed.”

“Blind Side is a superb debut novel from the pen of Jennie Ensor. From the opening prologue to the very last page, I was completely immersed in Georgie's story as we are transported back to London, 2005 - set before, during and after the 7/7 bombings.

The book opens with a short prologue that made the hairs on the back of my neck stand up and I simply couldn't read fast enough to find out what had happened. Jennie Ensor cleverly keeps us in suspense as we have a whole lot of story to get through before my curiosity could be satisfied.

...There are so many subjects and issues to discuss in Blind Side, that I think it would be excellent for book groups.

...Blind Side is an absolutely stunning debut from Jennie Ensor; so thought-provoking and profound that every reader will get something different out of reading it. I'm so excited to read the psychological thriller than Jennie is working on next. If it's half as good as Blind Side it will be a cracker!”

“This isn’t a straight-up book by any means as the author builds on many themes such as terrorism, immigration, family and sexual relationships, trauma, secrets, guilt and regret. The pace and the writing in this book was easy to become caught up in and I read this book over the course of the day without putting it down once. It’s a powerful and engaging novel, thought-provoking and difficult to forget once you’ve reached the end.”...

“Blind Side both surprised and captivated me. It was tense and suspenseful at times, with some thrilling themes, so I can understand the psychological thriller branding but I think it’s probably going to be a fair bit different to what you’re expecting. I suppose it feels more real and believable, not to mention more human, and I could buy into this story much more than many other psychological thrillers. The book grabs a hold of you instantly with a spine-tingling prologue and it doesn’t let you go physically until the end – mentally not for a while longer as the themes are left there on your mind for much more than 300+ pages. A great debut – and I’m looking forward to reading more from Jennie Ensor in future.”
— Reviewed The Book (full review)

“This is a smart, fast-paced romantic thriller set in London during the terror attacks of 2005. It confronts issues of class, illegal immigration and the traumas of war - all of which are sadly still relevant today. This is beautifully written, character-driven fiction without heroes and villains; people are much more complicated and morality is nuanced. At the heart of this novel is a love story about realizing you can never fully know the people you love and learning to trust them (and yourself) anyway.”
— Katie O'Rourke, author of FINDING CHARLIE

“When I received my copy of Blind Side, on the face of it I was expecting a fairly standard suspense / thriller – right up my street, don’t get me wrong, but likely similar to a lot of books I have read before and probably will again. I am pleased to say I was pleasantly surprised...”...

“What sets this book apart is the setting – the story takes place in London in 2005 in the run up to and aftermath of 7/7. Tensions are high and distrust is in the air. Nikolai has links to Chechnya which are hard for Georgie to ignore. Whilst I wasn’t in London during this time, the descriptions of how people felt, their anxiety and constant looking over their shoulder and suspecting people felt very real to me.”
— Once Upon A Littlefield (full review)

At the heart of Blind Side is a love-story – the classic love triangle of one woman and two men – that explores many issues of relationships and human behaviour ‘love and friendship, guilt and betrayal, secrets and obsession’ but more interestingly, importantly, also ‘confronts urgent issues of our times and contemplates some of our deepest fears’ Indeed, in Blind Side Ensor skillfully combines political and thriller elements, but while the aspects of 7/7 undoubtedly colour the story and heighten the gripping nature they add to the story, not detract like I feared.

“A prologue that pulls you in and a storyline that doesn’t let you go until the very last page. This is such a thought-provoking read; pitched as ‘a thriller about a love triangle set in London before and after 7/7’ – it is that and so much more... Blind Side tells a compelling story that grips you in a unique way.”...

“The characters of Georgie and Nikolai are extremely well developed and the setting perfect - living not too far from where these attacks took place, I feel Ensor really captured the true atmosphere that stretched across London at that time; the distrust was ripe, the fear was real.

I found it particularly thought-provoking reading about Nikolai's experiences as a soldier in the Chechen war, you really begin thinking about the realities of war and terrorism, people’s attitudes and how they treat each other in the aftermath. Ensor has written a beautiful, well thought out and well researched story. A difficult read, in the sense that it touches on some very real issues, and really gets you thinking about society; a book that will stay with you long after reading it.”