The craic was ninety (per cent) 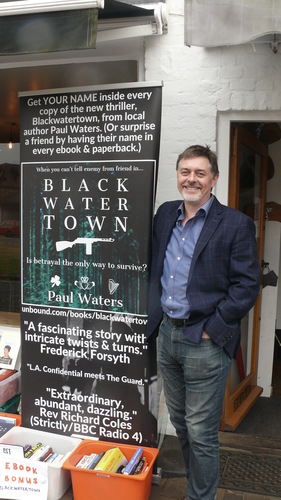 Loitering in the street, trying to persuade passersby to back my book Blackwatertown, could be a daunting prospect. But it can't be as daunting as trying to sell Peace By Peace round estates in Belfast when I was teenager, surely? (One friend in the Peace People had it particularly hard. With a beard, he ressembled Gerry Adams - a risky look in some parts of the city. Without it, he was the spit of Postman Pat. Dilemmas...)

And I was right. It was fine. Especially given that I was standing outside the friendly and wonderful (and newly expanded) Deli in Chalfont St Giles. And especially with passing Germans like Stefanie and Wolf. (Stefanie took the photo and kindly sent it to me.) Not to mention the other supportive locals and visitors who gave financial or conversational encouragement.

90% deserves a song. If you can think of a more appropriate one than The Craic was Ninety in the Isle of Man, let me know in the comments below. (This is the Christy Moore version. No video sadly, just a still pic.)

90% also means new supporters to thank. Most of them took pity on me in the street, but there was one notable exception, a long distance pledge from deep inside the Swedish forest - Will Dean, the author of the excellent debut Dark Pines featuring the genuinely new character, local journalist Tuva Moodyson - and the follow-up Red Snow. Dark Pines is somehow completely fresh and innovative, while also offering the warm embrace that makes you feel you've found a new fictional home. You should read it. And then his next one. (And repeat, as long as Will Dean's writing them.) Thanks Will.

Thank you all. And, y’know... tell a friend. Nearly there.