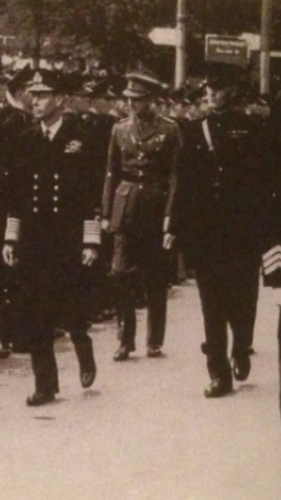 That's King George VI on the left, in naval uniform. He looks a bit starstruck. No wonder, when you realise he's walking beside the celebrated RUC District Inspector Michael Murphy - aka Great Uncle Mike - of B District. (On the right in the dark uniform.)

I'm sharing the picture with you to mark you taking my book Blackwatertown to 50% funding. Halfway to making the Unbound publishing and printing wheels grind into action. Thanks to you.

Great Uncle Mike had particular parade ground and drilling skills from his time in the Irish Guards, in which he served during World War One. He stormed the Hohenzollern Redoubt on the western front in Europe - the Hohenzollerns being the then German royal family. So he was used to hobnobbing with royalty of one flavour or another.

The photograph dates from 1946, when the king inspected an RUC guard of honour outside the City Hall in Belfast. DI Murphy, OBE, KDM, MM, was the commander. He later escorted Princess Elizabeth in 1949 (see past update) and later again led the Northern Ireland contingent at the king's funeral in London.

It's thanks to relatives and people I've spoken to over the years as a journalist that I've been able to write my fictional story Blackwatertown. The main character, Jolly Macken, is a demoted RUC sergeant in the 1950s. He goes searching for a killer in a sleepy village near the Irish border, and finds love, danger and betrayal - while accidentally sparking a war along the way. 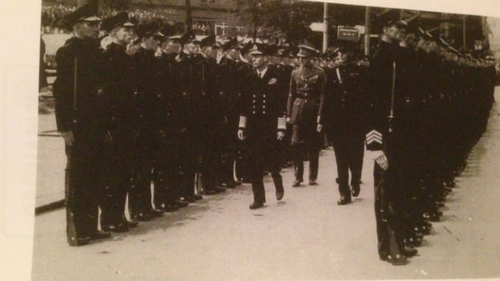 I've got this far with Blackwatertown thanks to dozens of supporters - ie you.

If you're reading this because one of my very kind supporters has shared this update, why not consider joining them. Pledging means you'll get your paperback or ebook before everyone else AND you'll get your name printed in every single copy. Thanks.