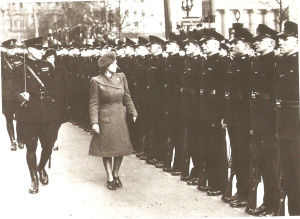 The main man in Blackwatertown, Jolly Macken, is a demoted RUC sergeant in the 1950s. But sure what on earth would I know about that, a young strip like myself? Fair question. I wasn't around then, nor ever in the RUC. But I know some who were. Relations like the fine fella in the picture. It was a bit of a dangerous family tradition.

There was no difficulty finding gunmen back in the day. Swordsmen were rarer. But blades are the style when you’re escorting a princess. There she is, the future Queen Elizabeth, looking very nicely turned out.

It’s understandable that you didn’t notice her at first glance, given the distinguished handsome bloke beside her. He’s District Inspector Murphy – aka Great Uncle Mike – of B District.

He'd called in to lead RUC parades on royal visits, partly because he was one of the few officers versed in sword drill. That came from his Irish Guard days. (And, obviously, the good looks.)

On this occasion Princess Elizabeth is inspecting an RUC Guard of Honour at Belfast City Hall in June 1949. The following month Michael Murphy was promoted from DI 2nd class to DI 1st class.

There always were Catholics like Michael Murphy in the RUC. Not many, most of the time. I made a BBC Radio 4 documentary called Policing the Peace about post-ceasefire efforts to encourage more Catholics to join, with the legendary presenter Peter Taylor. He wrote about it here. That was back in 2003 when I was Peter's favourite radio producer! (Full disclosure: I was his only radio producer in those days. He'd been all telly before then. I think my position has since been thoroughly usurped.)

This book, Blackwatertown, owes a debt to everyone who served back then or shared sometimes hair-raising or distinctly dodgy stories of those days with me. Would they like it? Will they like it? I honestly don't know. I hope you do.

If you haven't already, please choose one of the pledges to help the book to final publication. I you have already, thank you very much indeed.