It started with a cyst, never thought it would come to this... 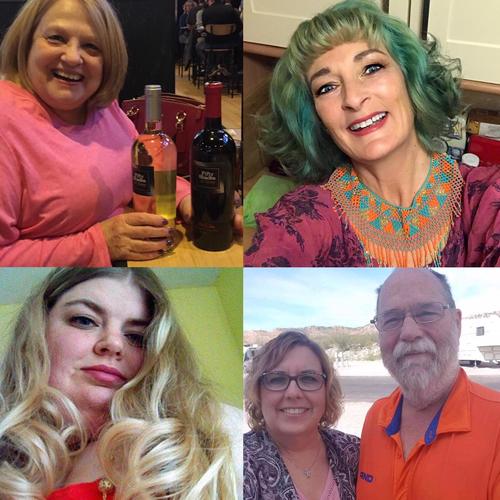 The oddest things can bring people together. That's my mate Su Verhoeven in the top right corner, with the green hair. She was talking to people around the world - her "Lovelies" via her YouTube channel. Su's a sharing type of person, and when a huge stubborn cyst grew on her back, boy did she share the gruesome details. But people didn't wince and turn away, they flocked to her videos. Tens of millions of views. No doubt some of the interest was prurient, but other watchers, fellow sufferers perhaps, gained useful information. And then there was the third category - Su's Lovelies - who saw the films, saw the pain, and did something about it.

Some of them are in the picture - Bonnie Sneed from Iowa, top left, laughing in pink. Alena Doll from Washington below her, bottom left. And Debra and Lee Mowers from Illinois, bottom right.

The short version is that they reached out and made it possible for Su to travel to Texas for successful medical treatment. It was a miracle. Not the treatment itself, but the outreach of kindness amongst people who had never met. Those are the bare bones of the story. The full version is Su's to tell. Or her Lovelies. They've started meeting now, face to face.

And through Su, I've got to know some of the Lovelies a little. We were chatting the other night (on YouTube, of course). First of all Bonnie kindly backed Blackwatertown from across the Atlantic. Then Alena and Debra joined in. Big time. Which is why two characters in the book will have a north American influence. (Though don't worry, thanks to Janice Stains, the dog remains European.)

And it started with a cyst.

Thanks Lovelies for your support. And thanks also to new pledgers Lou Cotton, William Ward, Pól Ó Duibhir and Sim Dehra. You've all pushed Blackwatertown to 44% funded!

(By the way, for those didn't immediately guess where I got the cheesy title for this update from - Hot Chocolate - It Started With A Kiss 1982.)