Blackwatertown is 100% funded thanks to you... 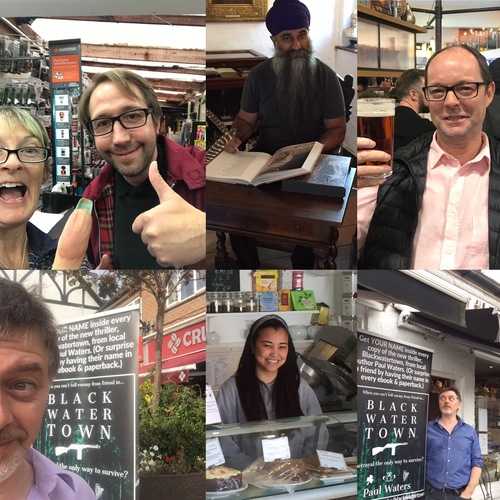 100% Phew! The pictures are from the final push over the line. Top right corner, that’s old mate Su in local shop and community support Yaldens, with Matthew Yalden himself. They’ve backed Blackwatertown and helped spread the word. They sent me a thumbs up for 100%.

And that’s Parmjit Singh of Kashi House publishers, sitting where John Milton dictated Paradise Lost. Parmjit has been a great support, and came to an exclusive out-of-hours cream tea at Milton’s Cottage Museum in Chalfont St Giles - put on to say thank you to some big backers. You can see the lovely books Kashi House published here. And I recommend you visit Milton’s Cottage and beautiful garden - not just because they've been so encouraging to me.

Another supporter at the cream tea was international man of mystery (conference host) and former BBC presenter Tim Jenkins. That’s him toasting 100%, in an airport en route to another far flung location.

The bottom corners are me out street hustling for supporters. Thank you to Crumbs in Chalfont St Peter (bottom left), Wenzels and Waitrose in Gerrards Cross, and most of all to The Deli in Chalfont St Giles (bottom right - me searching the sky for rain coming). They all let me erect my pop-up poster and try to persuade potential readers outside their premises.

Mark at The Deli has been stalwart in backing an obscure local author (me), while supplying delicious food and general well-being to the population. Now The Deli’s been extended, there’s more room for readers, writers and other lingerers. And you can see a major source of Deli good cheer, Thanatip, (bottom middle) - behind the counter.

More than 300 people have backed Blackwatertown - friends, family, neighbours, strangers and new friends online, passers by, readers around the world and some very successful and acclaimed authors (of whom, more anon). Thank you all - and I’ll be more specific about recent supporters below. 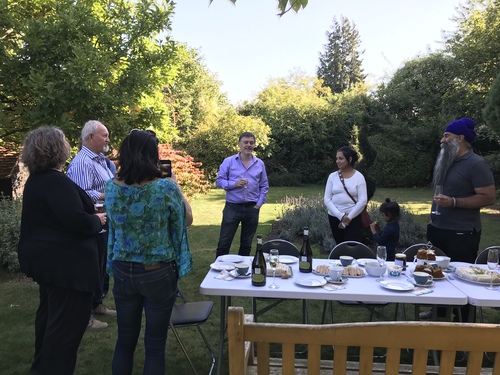 (Pictured: Some of the guests at the Blackwatertown supporters cream tea at Milton's Cottage, in one of the cottage gardens. Curator Kelly O'Reilly and chairman Simon Avery (on the left hand side) love Milton, but also have time for lesser known authors.)

So what happens now? The production process begins. I supply the updated final version of the manuscript to Unbound. They arrange copy and proof editing, team me up with a cover designer, begin technical publishing stages. I’ll receive a proof copy to check, and then printing happens. And launch party. Or parties.

It’ll take a few months and you’ll receive progress reports from me and from Unbound.

But - what also happens is that my search for funding and supporters continues, albeit at a more relaxed pace. That’s because as the book goes through the initial publishing stages, it is still open to more supporters. There is still the opportunity to have your name, or the name of someone you like, printed inside every paperback and ebook that is sent to supporters or sold online or in bookshops. Eventually the window will lose, when printing is imminent. But for now, please do encourage others to share or support Blackwatertown. It’s not too late.