ON CLARIE AND HITTING 55%

Can you believe it? A huge milestone in crowdfunding Blood On The Banana Leaf. And that is down to all of you, my incredible supporters. I can’t thank you enough. I will be thanking you for the rest of my life and this is your book too which feels very comforting.

After talking about Sawtoh in my last post, I wanted to introduce my helper Clarie, who lived with us for 4 years until we left Singapore in 2014. Oh! How I miss her. On reflection, I think many people were quite mystified by our relationship. It was close by any standards in Singapore but our employee/employer relationship blossomed into a strong friendship even though I was aware of the imbalance of power surrounding my friendship with Clarie. She refused to call me by my Christian name, always preferring Ma’am Tabby.

We used fight playfully over who would do the washing up, who’d bring the shopping in from the taxi and who’d go first through the door. And all the while, at both houses we lived in, the employers on either side would seethe with undisguised loathing & mockery at the both of us.

Clarie comes from a small village in Leyte, a province in the Northern Phillippines that was devastated by Typhoon Haiyan in 2013. In a brutal twist, this natural disaster stole everything from many people who had very little, to begin with. Clarie had spoken so much about her parents, Lucilla & Rodrigo, that I felt I knew them, and the character, Lucilla, in Blood On The Banana Leaf, is named after her mother.

One of my most startling memories, early on in Singapore, is the first Christmas we returned to Scotland, leaving Clarie behind in the house. As the holiday approached Clarie suggested I lock up all our silver, jewellery, computers and other precious things in our bedroom. I was non-plussed until she explained that this is what all her other employers had done. To prevent theft. Not external theft, you understand, but implicitly suggesting that Clarie was untrustworthy.

I was so clueless, and I will berate myself for years to come, that we left without making sure she had enough money to cover the two weeks we were away. When we arrived back, the first thing a sobbing Clarie ‘confessed’ is that she had found 50 Sing Dollars in ‘Sir’s’ trousers and had used it for food. She went on to say that I must take it from her salary. God! I was mortified and apologised for over an hour begging her forgiveness for such a selfish, thoughtless behaviour. The next day I set up a bank account for her and her wages were paid in by Direct Debit. I’m not sure how many FDW’s (Foreign Domestic Workers) have Bank Accounts but I’m sure it would be below 50. This sort of freedom is an anathema to most Singaporean employers.

Clarie never asked for money, in fact, I used to have to pull information about her parents out of her. I found her crying in the kitchen when both of them were stricken with Dengue fever and there was no health insurance in place for her mother who already had a heart problem. I contributed to Lucilla's recovery with pleasure.

As Westerners, particularly as Western women, we have no clue about our Asian sisters who still live in abject poverty often with only two choices available to them, in order to earn money for their families.

Women either go into 'service' in Singapore, Saudi or other countries or they enter the Sex trade.

These are the only paths open to poverty stricken women. And here we are, in the UK, America and Europe complaining about women’s rights, the NHS and the state education system.

When I told Clarie about the incredible benefits available in the UK, it took her hours to adjust. And she still thought of my homeland as a magical place asking (quite genuinely) if the streets were paved with gold.

Clarie is a beautiful, warm, devout, artistic and clever woman with the biggest heart and I loathe the fact that she is still in service in Singapore. We stay in contact and one of my immediate goals is to be reunited with her again and set up a Foundation for her village, helping its tiny primary school where six children can share one pencil and also pay for a medical outpost to make it easier for the elderly and infirm to receive treatment.

I am proud to know her and am a better person for having her in my life but the quality of her day-to-day existence and the lives of all the FDW’s is one of the reasons that my novel is so important to me. I am hopeful that it might focus the spotlight on Singapore and force her to re-evaluate its treatment of the maids and helpers that live and work there.

Thank you for reading and thank you so much again for your support. My dream is inching nearer and nearer because of you. 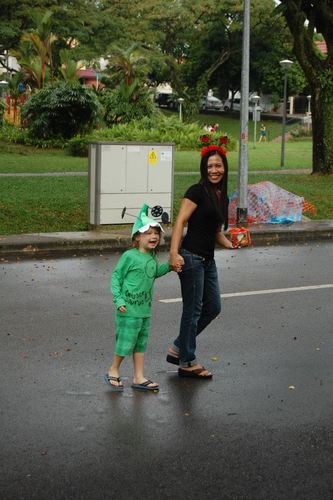 Moving post- lovely to hear about this friendship and how it inspired your great novel. X

Thank you, Lesley. It took a bit to write but Clarie has been such a positive influence on me, as an individual, but also the whole family x