Researching Between the Devil and the Deep: Rotten eggs and beautiful blue lake 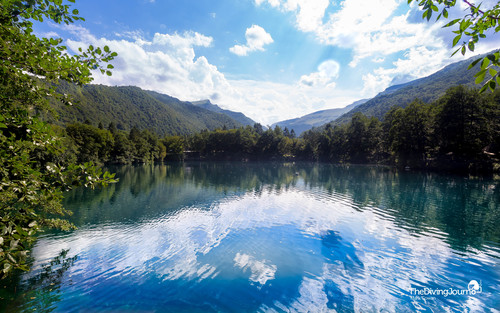 The whiff of what can only be described as rotten eggs wafted through the driver's open window and into the back of the van where we were seated.

Ah, Blue Lake, our interpreter, Vladimir Belichenko, said. You can smell the lake when you are near.

We’d been on the road from Nalchik for about 40 minutes. We had driven alongside the vast orchard near the river, past the hydroelectric power stations on the hill, and through the village of Babugent. The van’s engine grumbled as the road headed into the mountains. Then we passed a herd of cows ambling along the middle of the road and no one really seemed to think it odd.

A short distance further a sign informed us we’d arrived at Goluboye Ozero and a hamlet emerged from the wilderness, a few chalets and a roadside café to begin with. The driver pulled off the road into a gravelled car park and we got out. Contemporary pop music drifted through the air, an introduction to the summer industry that had grown around the lake. 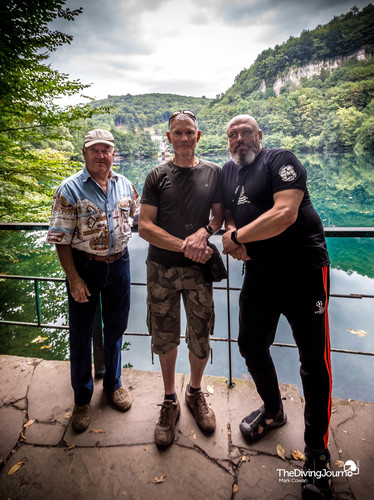 “Martin, Martin." Our host, Eduard Khuazhev, (more on him in a post to follow) waved his arm for us to follow. Market sellers stopped to greet him with a handshake and hug as we walked towards his new dive centre at the lakefront. A sign outside said the building was the "Center for Underwater Research of the Russian Geographical Society".

There, waiting for our arrival was a reporter and cameraman from the local TV station. Martin’s return was indeed big news in Kabardino-Balkaria. So big, a second news crew turned up a short time later and Martin made the evening news that night. 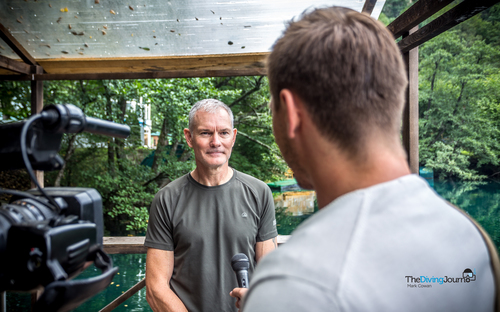 While Martin was being interviewed, I went to explore the area around the lake. While researching the book I’d looked at plenty of photographs, but this an opportunity to finally soak in the atmosphere, take measurements, count steps, note the little details that add colour to the story, understand the geography.

Found in a natural amphitheatre, Blue Lake's eastern edge, behind a grove of alder shielding the road, is dominated by a wooded bank which rises steeply to a precipitous rock face. West finds oak and hornbeam. The summit of Mount Elbrus is hidden over the distant horizon, obscured behind the ridges of the Cherek Valley and mountains beyond. In the sunlight of a windless day, the lake’s surface shimmers super-natural cobalt, a 27,000 square metre oval mirror to the unpolluted skies above.

At the southern end of the lake are two imposing buildings. One is a faux castle with the modelled jaws of a bear surrounding the front door and a monstrous statue of an eagle, all outstretched wings and screeching beak, off to the right. the Baron von Münchhausen Museum was set up here by a man claiming to be a descendant. Across the road and amongst the trees on a rise is the other, a stone-clad hotel nicknamed The Castle which served as a base for the original expedition.

The locals can reel off any number of myths about the lake’s history. Some say she is home to the malignant spirit of a fallen dragon, others that she is filled with pure tears wept by a princess for her lost love. For others, there is a fable involving a poor shepherd boy from the mountains above who betrayed a magical spirit. His flock was taken, an earthquake shook the ground. Down in the valley a new lake—Blue Lake—appeared.

They call her Cherek-köl (There are multiple spellings of the name, including Tserik-Kel, so I've gone with the spelling offered by our host Eduard Khuazhev). The joke, apparently, is the lake has another name, one derived from the Balkar phrase which roughly translates into ‘smelly waters’. That's a reference to the hydrogen sulphide which occasionally laces the water with that whiff of rotten eggs we caught on the drive in. Yet surprisingly, there was no smell at the lakefront.

As I circled the lake a steady stream of tourists arrived, stood in front of the blue water and put on their best camera smiles. Market stalls, staffed by women in headscarves, lined the southern banks waiting to greet them. They sold them clothing and stuffed toys, elegant fabric flowers and trinkets. The smell of charcoal hung in the air and a restaurant grilled salmon right in front of them for 250 rubles and plated homemade cheese for 200 rubles.

Taking a break from the interviews, Vladimir tossed a coin into the water. After it plopped through the surface, we watched it slowly sink to the bottom like it was drifting through the air.

The water is crystal clear, he said, it's like it's not even there.

Yes, he was right, I later discovered. As I walked back to the dive centre, I was drawn to a crowd near the water's edge. They watched as two young men scaled a tree and then threw themselves, 15 or 20 feet, into the water.

I stood on the bank with my camera and looked to get a better angle. I glanced over my left shoulder. The bank dropped away, but there appeared to be a stone for my foot halfway down the slope.

I stretched my leg towards the stone. Only my foot didn't land where I expected it to. It didn't land anywhere for a few moments. I was confused.  The situation didn't really compute until I heard the splash and felt the cold water wrap around my leg. My foot finally found the stone, a foot and a half lower than expected. A foot and a half underwater. My arms began to flap as I was tipped beyond the point of balance. I wobbled like a tightrope walker on a windy day as I tried to stay upright. There was no net to catch me and my right leg splashed into the lake as well.

The crowd turned as I clambered back to dry ground, soaked to the knees, water pouring from the eyelets of my shoes. I shrugged my shoulders and they smirked at me. Then they all turned back to watch as one of the two young men dived into the water with grace. He got a cheer.