Researching Between the Devil and the Deep: Meet the men who saved Martin Robson and save some money yourself 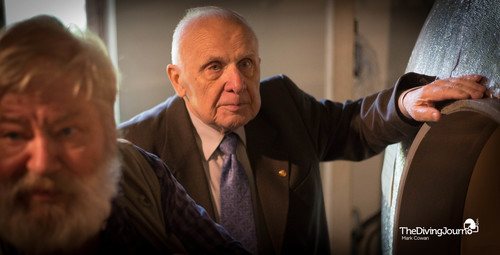 The diving season in Europe and the US is now well and truly underway and the crowdfunding campaign for Between the Devil and the Deep has reached the home stretch. We are now just a handful of percentage points from being fully funded. To help us reach our goal, the publisher, Unbound, is offering our supporters a 10 per cent saving this month if they want to upgrade their pledge, perhaps adding an exclusive t-shirt or signed print to purchase of the book, or buy another book for a friend or family member. To claim your saving, enter the code NINETY in the promo box at checkout, share it with your friends, and help Martin and I reach our target.

In the meantime, and on the theme of saving, here is another insight into the research trip to Russia and our meeting with two of the men who came to Martin's aid when he was in deep trouble, paralysed and lying in ITU. On the final day of the trip last summer I got to see Dr. Gennady Sokolov in action and also met the man at the heart of the Ruusian government who orchestrated the rescue mission for Martin, helping to save his life and his legs. I hope you enjoy. If you do, don't forget to share it. Kind regards, Mark

The Men who Saved Martin Robson

AIR hissed through the maze of pipework and into the recompression chamber, and everyone in the room studied the five men on the closed circuit television monitor above their heads.

The image was bright, saturated in parts, but viewers could see the men repeatedly equalising their ears. They were locked inside the GVK-250 chamber which dominated the room, but they were already a world away. Taking part in a simulated dive, the men were under pressure and on their way down to 100 metres.

Dr. Gennady Sokolov, orange pen in hand and a clock set running in his mind, stood back, looking and listening for any indication the men were in discomfort as they headed for the bottom.

As the chamber reached the desired depth, technician Pavel Spirkov used both hands to spin the inlet valve on the control panel. With the air tapped off, the room finally fell silent.

On the bottom, he said into the microphone, and the men inside cheered.

Dr. Sokolov returned to his desk and made a fresh note in his ledger. Over the following hours he would fill pages with line after line of neat handwriting; each row of blue ink documenting his observations, his decisions and reasoning behind them. This was his element.

After three days in Nalchik, Martin and I returned to Moscow, back to the same hotel, the same room (I joked the FSB were in the adjacent room, spying), and went to visit Dr. Sokolov’s deep diving facility.

Hyperbaric medical centres around the world have practitioners like Dr. Sokolov who specialise in starightening the bends sufferby divers, but few have the years of medical experience and study that accompany him.

His first patient was in 1964, and Dr. Sokolov estimated he had treated hundreds more in the 55 years that followed. There were the successes and the dead losses, but the patients he remembered most were those that defied expectations: the diver completely paralysed for ten days who recovered the use of his arms and became “strong in a wheelchair”; the diver given a second chance to walk again with the help of a cane; the diver lying helpless on a stretcher, with shallow breathing and a weak pulse, who rose from his cot when the chamber hit the equivalent of 70 metres. 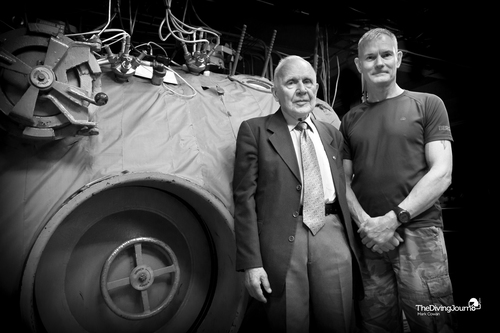 The simulated dry dive experienced by the group that Saturday was significantly shorter than the treatment Martin went through and had none of the drama. At about three hours, the chamber run was still long and allowed me to get a sense of who Dr. Sokolov was at work.

As the chamber was blown down to depth, Dr. Sokolov stood back while his colleagues did their jobs, never allowing his evident wisdom and experience get in their way; they were all authorities in that room.

Once the chamber arrived at 100 metres, he spoke briefly to Pavel, looked again at the monitor and made another note in his ledger. On an oversized clock on his desk, he placed a wooden peg into one of the holes which ringed the face, marking the time for his next action.

As the clock’s minute hand reached the peg, the men inside the chamber having spent less than ten minutes on the bottom, Dr. Sokolov signalled to begin the ascent. High-pressure air howled into the room as it was vented from the chamber. I instinctively put my fingers in my ears. Seeing this, Dr. Sokolov reached behind him for a pair of ear defenders he then held in my direction.

As the noise died down, he made another note, reset the clock and looked over the paperwork. His desk was so busy one could hardly see the wooden surface. Under the orange glow of the desk lamp, there was the ledger he was writing in, a second ledger, a folder containing the decompression schedule, medical reports for the participants, the clock, a watch on a black leather bund strap, and a book, a science fantasy novel called часовой армагеддона.

What followed was a typical schedule, the chamber pausing at specific depths for carefully calculated periods to allow the safe release of the nitrogen which had massed in the men’s bodies during the dive. 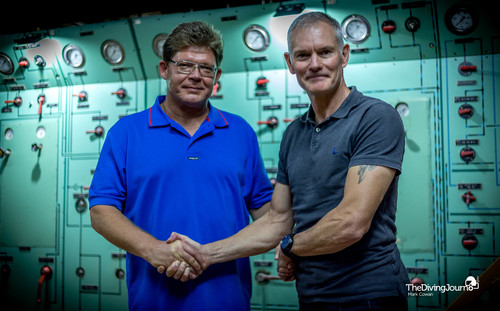 Leaving Dr. Sokolov to his books, Martin and I moved to a side room to interview two more people involved in his story. There was a Sergei Gorpinyuk, a support diver, and Yevgeny Glukhov (above with Martin), the chief diving specialist at Emercom, the Ministry of Emergency Situations.

Recounting details of the rescue mission, Glukhov displayed the quiet resolve that had pulled together resources from across the country and then convinced the Minister (now Minister of Defence), Sergey Shoygu, that they had a shot at saving Martin’s life.

There were plenty of pieces he needed to coordinate: the doctors at the hospital in Nalchik caring for Martin; the cargo plane that needed to get into the air and fly to the Black Sea coast before the weather closed in, and pick up the hyperbaric life-raft required to transport Martin to Sochi safely. There was the team preparing the recompression chamber, and trying to source enough helium gas; the ambulances to transport Martin by road; and perhaps most important, Dr. Sokolov who left his apartment that morning and boarded a flight to Sochi to treat a man he’d never met.

Glukhov was softly spoken and thoughtful with his answers, but quick to smile when he recalled receiving a phone call from Dr. Sokolov and learning Martin was on his feet.

The wheelchair was not going to be needed, he said, only then was it possible to relax.