Researching Between the Devil and the Deep: Logging a dive at Blue Lake 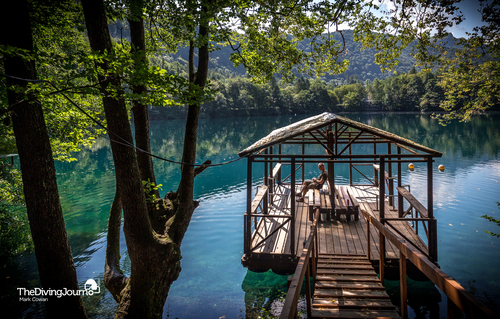 Here is some Friday reading to get you ready for a weekend of diving. It's the latest insight into the research that I've done for Between The Devil and the Deep, and covers the opportunity I had to dive Blue Lake with Martin. Having spent so long looking at plans, photographs and video of the lake this was finally my chance to dip beneath the surface. I hope you enjoy. If so, please share it with your friends and help us reach our funding goal. Have a great weekend, Mark.

Logging a dive at Blue Lake

Standing on the dive platform, equipment sitting heavy on my shoulders, I looked into the water the way an astronaut might look into space and thought: it’s time to go exploring.

The shallows of Blue Lake were crystal clear. From the banks of the northern shore, I could see the features five, maybe ten, metres down, beyond the point I could reach duck-diving as a child.

The divemaster patted me on the shoulder. Poyekhali! Let's go!

I stepped out from the platform and let gravity take me into the water.

On our final day in Nalchik, Martin and I had the chance to dive the lake. For Martin, it was the first time he had returned to the place where he’d been ambushed by decompression sickness. For me, it was an opportunity to finally experience the site central to the story I’d been writing about for hours, days, weeks and months.

Eduard Khuazhev had kitted me out. A bulky undersuit that huffed and puffed air every time I moved; two pairs of thick woollen socks, one under the undersuit, one over the top; a blue and black membrane drysuit; five-millimetre neoprene gloves and a hood; all to stay warm. 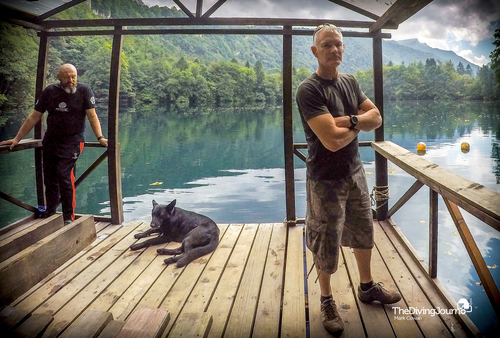 The lake wasn’t as cold as I’d expected. The sunlight coloured the water a robin’s egg blue, and I could see twenty or thirty metres in every direction.  The movement of the clouds revealed itself in silhouettes slinking across the bottom; underwater, the sun still throws your shadow and the surroundings still go from light to dark and back again.

Underwater, the bank sloped steeply to a plateau, fifteen-or-so metres down. Charophytes, more commonly known as stoneworts, formed a smooth, silk-like fabric of algae draped over the sloping rock face or clinging to the petrified trees which have fallen into the lake. In the sunlight, they were a verdant summer meadow. Their magic is one of the reasons Blue Lake water is so clear that it could be bottled and sold for £5 a pop. Stoneworts filter the water by capturing nutrients and stabilising sediments.

Best described as a lip to the lake’s decanter-shaped body, the shallows of the north shore sloped down towards the mine shaft on the eastern side. Finning above the bottom, I found myself staring into an abyss off my right shoulder, the blues and greens of the top twenty metres of water giving way to a black nothingness below.

As I reached the east wall, the bottom seemed to fall from the world. On my left shoulder, the rock wall plummeted vertically downwards. On my right, there was nothing but an idea that somewhere down there an unseen cave system might exist. 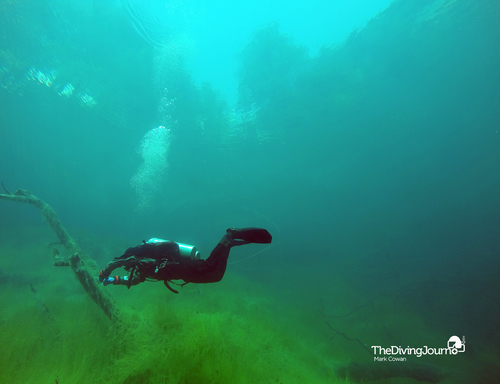 The wall was a mixture of jagged outcrops, smooth faces and rock buttresses. Like the magic of Eiger’s North Face at dusk, the features of the east wall were preternaturally alluring in the smoky sunlight which reached down from the surface. Those same wavelets of sunlight pointed a way on into the depths. Shafts of light came from behind my head and converged before my eyes somewhere below. No matter how hard I strained, there was no way to see what was at the end.

The deep was for another time though. We turned and finned back towards the northern bank. Ahead, the habitat was silhouetted against the sun. The habitat was fashioned from an intermediate bulk container, the kind typically used for transporting liquids and chemicals. The plastic cube was about fifty inches in each dimension and surrounded on five sides by a steel cage. The makers had taken a saw to the box and cut a hole in the bottom for the entrance. They had also welded steel bars together to make a platform for a diver to use when climbing in. Green fabric ratchet straps, the kind used to secure loads on heavy goods trailers, held the platform in place, leaving a clearance of about twenty-five inches.

To enter, I finned up to the platform and, in one swift move, flipped over so that I was looking upward at myself perfectly reflected in the mirrored surface of the moon pool, grabbed the edge of the container and pulled my upper body over the platform and up through the wet porch and into the pocket of air. With my feet now over the platform, I could stand up, my legs still submerged but upper body out of the water.

Inside, my exhaled breath echoed off the plastic walls which dazzled brightly in the sunlight. A foldable seat was fashioned out of two wooden boards and a piece of seat belt from a car. The bubble of light and life was tiny. After the novelty of being inside an air pocket underwater had worn off, I imagined what it would be like to spend hours decompressing inside. The loneliness of being locked inside an empty room with nothing to do but count the time felt like solitary confinement. If that is too hard to deal with maybe extreme deep diving is not something to apply for, I thought.

Exiting the habitat was the reverse of entering. I sank into the water, stretched my legs out, took hold of the container's edge and thrust myself away from the platform, face up to the surface. When clear, I flipped myself over and assumed the natural position of a diver.

Our time up, Martin and I began our ascent. Looking up towards the surface from a few metres underwater, I could see the dappled silhouettes of spectators in the world of air above. I climbed out of the water and sat down, water dripping from my equipment and pooling under the bench. Eduard Khuazhev walked towards me. 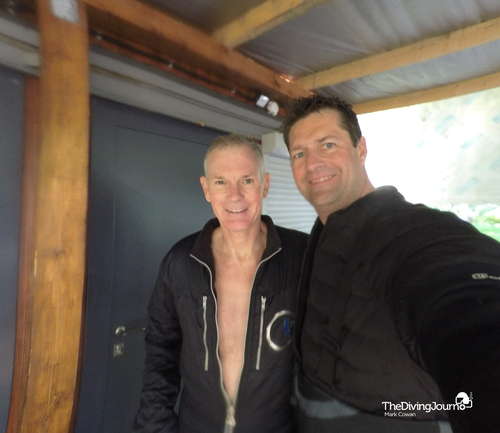 Mark, Mark, he said, and I beamed my best camera smile. His face lit up, and I could tell he was happy my experience in his lake had been a positive one.

Having experienced Blue Lake, I was now in a better place to make sense of this unfathomable landscape and how best to describe it in my writing.