Researching Between the Devil and the Deep: Blue Lake's Mountain Diver Eduard Khuazhev 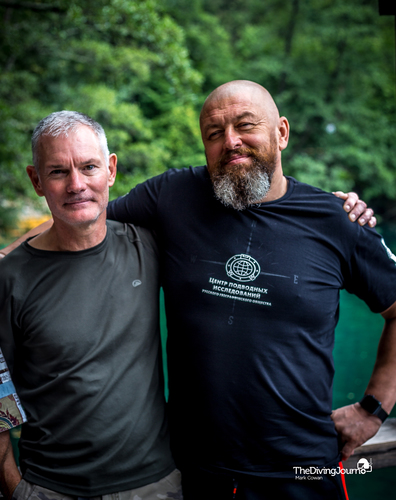 If you've been keeping tabs on the crowdfunding campaign for Between the Devil and the Deep you will have seen we're already 83 per cent of the way to our target. Having spent so long researching and writing the book, I'm excited to see the point on the horizon when it can be shared with you all. While you wait, here is another update from our research trip to Russia last summer. The piece features Eduard Khuazhev, a fixture of the Blue Lake diving scene, who was so generous with his time while Martin and I while were in Nalchik. I hope you enjoy the latest insight into the research trip. If you do, please share it with your friends. If you want more, check out the other updates. Thanks again for your support. All the best, Mark.

Eduard Khuazhev, our host in Nalchik, beckoned us inside. Peeling our eyes from Blue Lake, we walked into his dive centre. A kettle whistled in the background, black tea was on the way, and Eduard set down a plate of khychin he’d cooked up for us.

Khychin is a local speciality. It’s a thin flatbread filled with potato, cheese, fresh herbs, and covered in butter. It came served in a stack and cut into four sections.

Clutching a paper napkin, we each rolled a slice with our fingers and ate it in three or four bites.

Good? Eduard asked as he wolfed down his own slice.

We’d connected over football earlier that day after I'd spotted his Manchester United tracksuit trousers. My grandfather, Robert Cowan, was signed by the club in the thirties, I’d told him, and he seemed impressed.

Eduard Khuazhev is an imposing man. He's built like a rugby prop, shoulders shaped in the coal mines, and he looks like he’d have no trouble taking on an opposition front row. His head is shaven, a mountain man’s beard reaches down from his chin to the shark’s tooth necklace around his neck, and his voice growls like a bear.

To many, he is the one constant of the Blue Lake diving scene. He was in his mid-thirties when he learned to dive, 19 years ago. Having discovered his passion, he found a place to live it when the scientific and research diving centre opened at Blue Lake in 2005. He has two daughters with his wife Anzhella, although she jokes the lake is like another child. He’s spent more than 3,500 hours underwater there, more hours than most divers accumulate touring the world, and he smiles with pride when people emerge from their first dive in his lake. 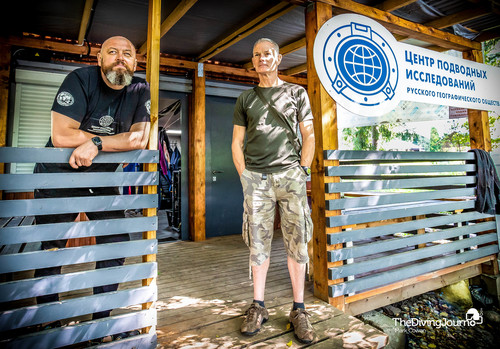 Eduard had been there at the station when we arrived in Nalchik, organised transport and an interpreter for us, arranged for the TV news reporters to interview Martin at Blue Lake, and helped us navigate hotel check-in when the receptionist asked for a piece of paper we should have had when we crossed the internal border into Kabardino-Balkaria.

Having spent our first day in the region with Eduard researching Blue Lake, eating khychin and drinking tea, we met up again the following morning to interview him.

During the early days of the research, I’d identified Eduard as someone I needed to speak with. He was there when all of the deep dives were being carried out and, among many other details, was able to offer a fresh perspective on one part of the expedition: the worry people had for Martin while he was underwater. Eduard was underwater when Martin was injured and provided insights I'd not previously heard and was not expecting.

Eduard was also on the surface when Andrei Rodionov, a support diver for Martin, was discovered unresponsive just 16 metres from safety during one of the dives. Six years later, tears still welled in his eyes as he remembered the death of his friend.

The hard talk out of the way, Eduard and his daughter, Sofia, took us to explore Nalchik. This was a perfect opportunity to chat and see how he navigated his world outside of diving.

The sun burned brightly as we strolled into Atazhukinsky Garden and found shade among the Manchurian walnut, Indian cedar and maple. Once recognised as the best green park in Russia, the garden is the pride of the city.

Walking through the sapping heat, we took a detour off the main avenue towards a tranquil square surrounded by trees. At one end of the square stood a towering, star-topped obelisk which cast a small shadow in the midday sun. An inscription on the plinth read "героям великой победы вечная память", eternal memory to the heroes of the great victory. At the base of the obelisk a flame flickered, an eternal gratitude to those who died defending the city when Axis forces attacked in the latter months of 1942.

A former Royal Marine Commando who saw action in the Falklands, Martin approached the memorial alone and paused for a private moment of remembrance. We all stood in solemn contemplation, our thoughts carried off by the summer breeze accompanied by sweet birdsong. 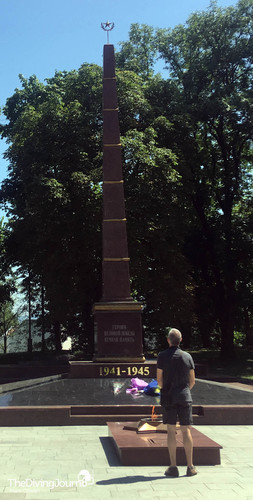 Mark, Mark. Eduard pointed to an ornate floral calendar, the day, date and month formed in red and yellow zinnias.

I looked in disbelief. No, I replied. But Eduard had seemed so earnest in what he had said. I looked again, imagining some inner mechanism that really did turn the flowers. No. Really?

Electronic, hahahahaha! The wind carried his mischievous laugh between the trees and off into the distance.

As we walked on, I noticed Eduard picking berries from a tree. His hand full, he stood in the shade of the branches, stock still with his arm outstretched, palm up. I held my breath as little birds fluttered from the trees and took the berries from his hand. 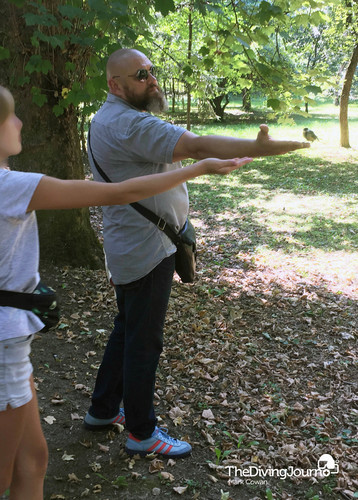 Our day finished talking over more food in a restaurant on the edge of the city centre. Eduard ordered for us, food from nearby Georgia, he said. There was salad, meat, a leavened bread with an egg in the middle called khachapuri, and khinkali.

Khinkali is a boiled dumpling filled with a tasty mix of meat, herbs, spices and broth. It’s considered impolite to eat khinkali with a knife and fork. Instead, you hold it by the stem, where the doughy folds come together to seal the parcel. Then you nip a hole in the top of the dumpling, slurp out the broth and finish by eating the tasty filling inside. The plate pushed my way, I took hold of the stem and looked at the meat pocket dangling from my fingers.