Researching Between the Devil and the Deep: A train journey south to the Blue Lake 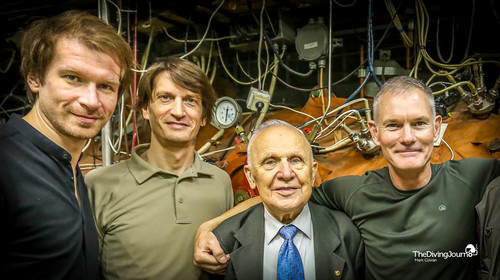 Interpreting is hard work. My wife used to do it for work and it takes a level of concentration and ability to shift seamlessly between two languages I still find impressive. The research trip to Moscow and Blue Lake for Between the Devil and the Deep wouldn’t have been as successful as it was without some very kind people who helped organise and interpret for us.

Martin and I were lucky to have three people, Vladimir Grigoriev, Dmitry Biskup and Anna Kozlova, with us in Moscow to help us navigate the city and interview the various people we had lined up to see, including Dr Sokolov. It helped, of course, that they knew Martin, were experienced divers and were also involved in various ways in the original Blue Lake expedition. The footage of the expedition in the promotional video, for instance, was shot by Anna; she shoots some great underwater stuff.

After a day at the deep diving facility, we spent part of the evening with Vladimir and Dmitry at their Moscow dive centre. The business partners are fascinating people with numerous enterprises, including a dive travel business and another designing manufacturing cold weather survival suits.

The two men were able to shed new light on aspects of the dive in which Martin was injured. Vladimir was a shallow support diver that day. He was underwater when Martin was injured and watched as he exited the sanctuary of the habitat for one last attempt at in-water recompression to buy time to get to the hospital. Hearing his memories of the events and his response, quite direct and matter of fact, helped provide a fresh point of view. Dmitry, meanwhile, was there at the surface waiting to find out what had gone wrong underwater. Their insights offered valuable eye witness accounts and gave us some thrilling extra details for the book.

The following day we visited Red Square for a few hours before beginning our long journey south to Kabardino-Balkaria and Blue Lake. Moscow is a city that thrills with history and majesty. There was the beautiful artwork to distract us as we made our way through the crowds in the metro station. There was the queue of people outside Lenin’s Mausoleum. There was the political power of the Kremlin imposing itself on the skyline. There was also a bowl of borsch. Then there was the late night departure from Moscow stuffed inside a third class, communal sleeper carriage, our bags shoved beneath our bunk beds and the Russian equivalent of Pot Noodle steaming on the table. 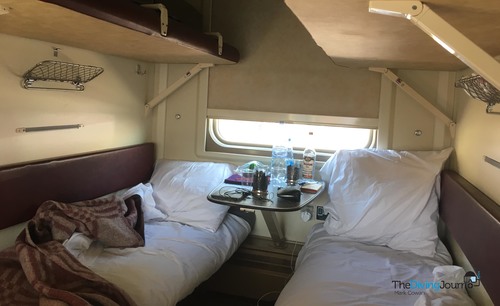 Called platzkart, the third class carriage is open plan and basic with no doors or curtains, and home to 54 dormitory style births. Within each open compartment there are two lower and two upper bunks either side of a table, a narrow aisle and another two berths on the opposite side running parallel with the walkway. Bedding was included in the ticket price, even if privacy wasn’t, and the mattresses were comfy.

Martin travelled this way when he headed for Blue Lake for the expedition in 2012 and I wanted to experience the same journey, the passage from over here to over there, from Moscow to Nalchik, for research. Crossing a thousand miles of countryside, zooming through regional borders, saying goodbye to new acquaintances and hello to newer ones, being asked for my passport, helped immerse me into the country as a traveller rather than a foreigner parachuting in.

Travelling southwards, through thousands of miles and not a single time zone, the locomotive dragged its carriages for a day-and-a-half. Beyond the bright lights of Moscow, the green sweep of the Russian plain chugging past the window really did have a hypnotising freshness under the bright summer sky. The murmur of conversation drifted through the carriage. Robson and I talked diving, Russia and the book and then stared out of the window as the train lumbered into towns lit neon with new developments, past power stations belching fumes into the air, and paused next to crumbling railway sheds. 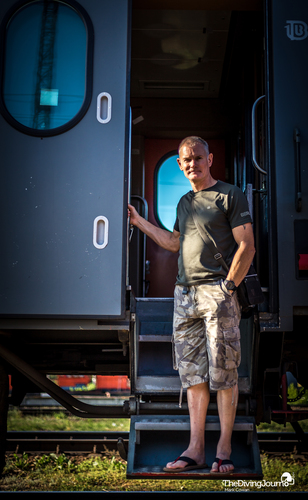 The carriage attendant, the provodnitsa in her sky-blue uniform and epaulettes, was a welcome figure. From a samovar, she really did serve a welcome cup of black tea in an ornate mug that I really wanted to keep as a souvenir. And the enterprising food sellers set up at stations that were stopped at along the route really were an example of integrated small-scale enterprise, each stall complementing the one before and the one after. One sold fresh fruit, the next offered smoked fish, the third a drink and another ice cream for dessert.

As we travelled further south, Russians were joined by Karbardins and Balkars, the two groups that make up the majority of the population in the semi-autonomous republic that was our final destination. The carriage was a good place where strangers could become something more, even just for a few hours. And parents really did usher their children to the two strange fellows at the far end of the carriage—that being us—to rehearse their English lessons. 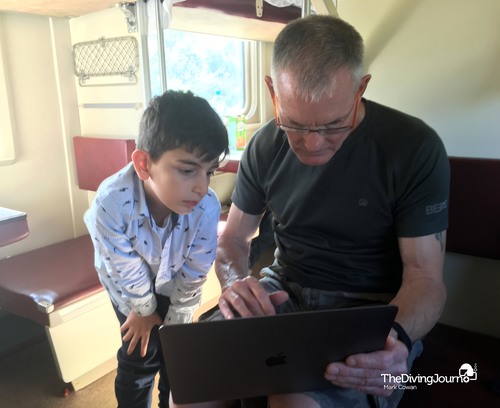 “Aston Villa,” I replied, arcing my hand towards the floor and whistling to illustrate things had not been going well for my team lately. Their laughter was proof that they understood.

Night fell and a hush descended over the carriage. We got our heads down for a few more hours, the arbitrary rhythm of the train on tracks lulling us to sleep, knowing that tomorrow the train would drop us at our destination, a little less foreign perhaps, with more of a sense of place, and Martin would return to Blue Lake for the first time since his unfortunate brush with the bends six years earlier.