Something to whet the appetite & coincidental brilliant artwork.

Fantastic news - we have hit 30% and all well within the estimated one month target time frame - THANK YOU!!

I thought it only fair therefore to offer up some more content from my draft manuscript - I've chosen the following short section for two reasons:

1. - It should hopefully be a teaser of things to come in terms of my writing style and also a 'scene'  with some growing tension.

2. - I'm working with a tremendously talented artist who is working up sketches to fulfil the rewards some of you have so generously pledged to.  Kirk Quilaquil AKA Ninjatic shared his ArtStation with me (check out the link - Amazing stuff!) and one of his pieces seemed to fit perfectly with the words I had already written - those that describe the farm house below!

Have a read, comment, share, promote and as always encourage those pledges! Lets keep up the momentum! :-)

(p.s. Apologies for the formatting - this blog doesnt lend itself too well to crafting 'easy to read' prose!)

"...Countless years of neglect had taken their toll on what must have once been a beautiful home. From the front it was the typical design of a child's drawing, one large central front door, two large square windows downstairs and a matching pair above on the upper floor. It was the perfect abode for a 2.4 children family. The solid external brick structure still stood relatively intact but for some crumbling mortar. The footings had subsided a touch and the house stood wonky, the right side dipped some four feet deep in the dirt. A section of the tiled roof had given up clinging on, slid off and down into the rear garden leaving the loft space exposed to the elements. As such one half of the house was rotten inside. The large hole had allowed countless years’ worth of rain, sleet and snow to tear through the ceiling, rotted the flooring and finished in the stone basement. A thick smell of mould filled those rooms. All wood and fabrics had long decayed and a stagnant pool of water now filled the lower ground floor which Rosalyn guessed was probably six or seven feet deep.

The side of the house with the roof still above it had been quite well preserved, heavy solid oak doors had all been shut when Rosie first entered and together with the stone walls they had done a good job of keeping the elements at bay. The front room where they had entered through the window had the remnants of what was once an expensive carpet underfoot but the dull brown, dusty, threadbare remains now cracked underfoot and disintegrated. The wallpaper all hung from the walls curling down on its own weight at different heights. Ferals had torched the sofa, the bookcase and every precious volume that once stood on its shelves, they had been piled within the huge fireplace which was the focal point of the living room and set ablaze. There was still a leather armchair, which violet now slumbered on. The chair was all torn and peeling and the cushion was completely flattened. In the corner a large square black device from the time before was lying on its smashed front, the wires on the back torn out and cut away.

In the kitchen there were more signs of Ferals. They had removed every single cupboard door to burn and had pilfered every utensil and piece of crockery. As with the device in the living room those in the kitchen had all been discarded on the floor their wires and any other useful elements, like a blade or a heating element, removed. Also strewn amongst the debris on the floor were several used Clickers. The pantry Rosie imagined would have once been full of all the most delicious foods, herbs, spices, meats, fruits and vegetables - all manner of items that no longer even existed, but now all that it stored were thick layers of dust, the skeleton of a large rat and piles of mouse shit. She had tried the door directly off the corridor and the kitchen to find a small water closet tucked in under the stair with a throne remarkably untouched by the passing of time. There was 'evidence' that Ferals had been in there too however. She had shut the door immediately.

She leant on the old chipped, scum caked butler sink and gazed out the back window. Across the field it was much the same view as the front, a gradual slope downhill into a field of crops which spread out below until it touched the imposing wall of trees that is The Barrier. Midway down the hill there were the remains of the charred frame of a burnt out barn. Weeds and grasses had moved in on the fertile scorched earth and where there would have once been just the dusty floor the former interior of the barn was now the greenest lushest part of the old farm.

As she stared she could feel fatigue taking its grip again. Her shoulders sagged, arms and neck ached and her legs burned. Her eyes got heavy and their lids threatened to close when suddenly something caught her attention. Something red, something dancing in amongst all the green of the former barn’s floor. A slight shake of her head wakened her senses and she focussed on it and as she did so, some more red flecks appeared...or had they always been there? Tiredness can play tricks on the mind. Rosalyn swung her rifle across from her back and braced it into her shoulder to peer down the magnified scope. All she could see was green. Grass. Bushes. Weeds. Leaves. Green. And then there it was again. A fleck of red caught in the slightest hush of a breeze. A small red papery flower with a black centre sat proud atop a thin hairy looking stem…and another, and another. She had seen them before grown in batches in J1, she understood their seeds could be used to develop a favourite narcotic of the guards. She was not aware they could grow wild. The way they merrily danced in the wind mesmerised her and whilst she stood watching them she decided she would pick them before moving on. Nothing was given attention in the Jurisdiction of Stricken and his minions without holding some value, perhaps she would work out how to manipulate this little plant and trade the produce.

The creak of a floorboard in the other room tore Rosalyn from her daydream. She spun on her heels dropping The Cold Bringer which swung to her back on its strap. In the same motion she drew the pistol from the holster on her hip and brought it up before her aiming at the door to the adjoining room. The room in which her daughter was. The door was ajar by just an inch or so. The dull gloom of the outside world dimly coming through the front window filled the room beyond with a grey light which seeped through the crack in the door and left a shaft across the floor which touched the toes of her boots. No further sound came from within. Rosalyn knew that had Violet woken she would immediately call out for her. They were no longer alone in the house..." 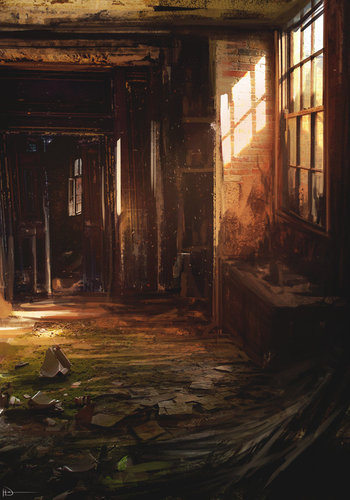