Evening everyone, just a quick update to let you know that the Pledge Party went well Monday evening! There was a good turnout, probably around 40 people who came along to support and listen to the pitches of myself and 7 other Unbound authors.

We had a real mixed bag of genres and all had a really great story to tell be it fiction or fact! There were four autobiogrpahies covering issues and experiences from the LGBT community, one woman's fight for survival growing up in Iran and a graphic novel exploring the life and career of an actress and artist. The fiction books followed the stories of a geeky lad who receives infinite wishes from a genie, a cross between 'Hitchikers guide to the Galaxy' and 'Worlds End' film and a thriller set in the dark underworld of Japan. of course Phase Lock was blatently the bestest! ;-)

I was pretty nervous but few little jokes that went down well settled me down and then I reeled off 3 and half minutes supported by the following script I'd written prior. I used the last 90 seconds to read the excerpt i'd treated my backers too in the last update. 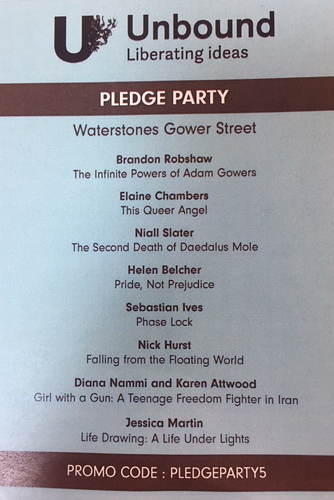 Hi all; thanks for coming along this evening! My name is Seb Ives and I'm the author of ‘Phase Lock’

I live in a little village in Hertfordshire surrounded by women – the wife, daughter, 2 cats and 3 hens! Finding time to write has always been a challenge but writing Phase Lock has been a real labour of love! I'm immensely proud of it and something that started as a hobby is now well and truly a dream! To be published would be an incredible achievement and a lasting legacy – authors are immortal!

I’ve always loved to read & I know you must all too (I'm a bit obsessed with epic series at the moment – my last three reads have been Hugh Howey’s Wool trilogy, Stephen Kings marathon Dark Tower and just before the hype of the TV show George R. R, Martins Song of Ice and Fire. I know the well held fact that reading makes you a better writer but I’d only previously been told I wrote well in a professional capacity – reports and the like but I just started Phase Lock and went with the flow!

I've always been a more than a bit obsessed with derelict and abandoned buildings and the idea of an apocalypse – I’m always day dreaming about how I’d fare in such a world (probably terribly!) and so I was on a long dull train journey passing by the wreck of an old office building and I decided I’d start writing a story.

I had a thought that coupled with this sight sparked my interest in having a go at a novel. I wanted to explore this question: “If it's all you've ever known, if there is no comparable, then, is it bad?”

So what is normal?! What is normal behaviour? What is ok? It’s what we are taught, what our society holds to be the correct way to conduct oneself…So when all that we know is forgotten and a mad man re-writes the rules can we judge those who follow them?!

Phase Lock follows the stories of two main protagonists, Bevan Hughes an unassuming electrical engineer, whose world is torn apart when his wife is abducted and taken beyond the walls of their city into the dead, desolate and dangerous world outside. Bevan has never known anything different, nothing more than the life he has led. But he has begun to question it all, the history he had previously known to be true, the rules that he had believed were based in solid reasoning, the traditions he had held dear, the world outside which was unquestionably a terrible place – he is now not so sure!

Meanwhile, we have Rosalyn Torres – she is as beautiful as she is emotionally cold and twice as deadly. She is a crack sniper assassin who once embraced her role in enforcing the rules of the regime. She too though faces a similar life shattering incident which sees her embark on a mission of revenge. She finds herself battling those she once obeyed and all for the cause of saving a child she never knew she was capable of caring for.

Their paths cross as they find themselves fleeing from the city out into the unknown crumbling world beyond the city walls.