Exciting quick update and first reveal of some artwork that has been finalised inspired by Phase Lock!

When I was first setting up my Unbound project I knew I wanted to create some interesting and different pledge rewards. I had a look through other live projects to see what others had done - I was determined to offer my backers the opportunity to get something cool in return. Obviously a copy of Phase Lock with your name in is pretty cool as it is but its always nice to get some added extras! I wanted there to be pledges where people supporting the process could literally be part of the work too.

So I decided I'd try a few things - firstly I would try and work up some titles for the pledge levels that had links to the book. So for example 'Shaping the Future!' gives the backer their name or a name of their choice as 1 member of the Solacity Leadership Committee (plus the book etc.). In the book the 'Solacity Leadership Committee' are a key group of individuals who essentially make decision during a crisis meeting that ultimately lead to the survival of a wider group of people as the apocalypse takes place. Through their actions so a future is provided for many. Backers to this pledge level become these characters in name!

Similarly 'Graduation Ceremony' sees to it that the author (that's me!!) will get a '17' tattoo in honour of the pledge and highlight the support as a special frontispiece in the book complete with a photo of the permanent inked mark. In the book the Resident's of Axiom, including our main protagonists Bevan and Rosalyn are all given a numbered tattoo beneath their right eyes corresponding to the section of the city into which they will live and work following their education period.

Secondly when setting up my pledge levels I wanted to move away from values that were round numbers. Mainly because I have a strange 'connection' to the number '17' - I was born on the 17th of May and it became my 'lucky number', I seem to see it everywhere! If I get a train quite I very often seem to get that as a seat number, a hotel room number, a locker number assigned to me, a seat number in the theatre, etc. etc. The number 17 appears a fair bit through the book too and so I also looked to make my pledge level values end in 7.

The final thing I wanted to try out was to offer pledges where the main reward might be more appealing to a prospective backer than actually supporting the publication! What if they had no interest in me, they weren't going to make that emotional purchase? What if they didn't read or weren't keen on my style or genre? So I also came up with a few pledge levels that I could 'sell' more broadly and 'things' I could sell to the tougher secondary market of 'people who dont know me'!

One such pledge level is 'The View from the Bastion!' - For those who get involved with the project at this level there is the reward of receiving some limited (only ever to those who pledge to this category) edition original artwork inspired by the book by Kirk Quilaquil AKA Ninjatic. This week Kirk finished his awesome vision of the world beyond the walls of Axiom! Here it is: 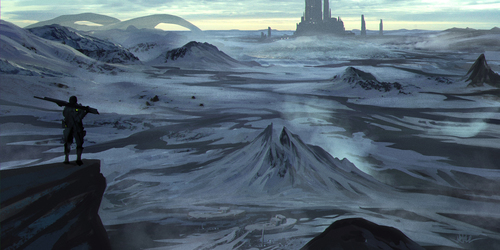 If you like this sort of work or know someone or some establishment (a bar? a club? A special interest shop? etc.) that might be interested in this please please encourage them to pledge and it will be theres to own!

Anyway, I think its so cool and i'm hopeful he'll be working up some more for me :-)