The first days of the Internet

While I wasn’t looking I discovered a new world. It was a real Eureka moment. I didn’t think of it like that at the time, of course, but it changed everything.
The computers that had a connection to the networks were used by the psychology and geography departments to crunch research data. They were dumb terminals, computer screens with no intelligence that were connected by a network to the bigger computers that did the work. None of the other computers in the department were networked at all at this point, they all stood isolated in their lab. Indeed, the whole idea of personal or desktop computers was so new that the lab still had in daily use the very first IBM PC which had been launched a few years previously.
These terminals were attached to a network and, through the college computers, attached to the Janet network. They had green monotone screens. They used a command line interface, which meant all instructions had to be typed out in a specific language and format. I understood the idea because I’d learnt the PC version of this, which was called DOS, but it was still painfully like trying to write in a foreign language without even a phrase book. I’d never been any good at languages.
The screen emitted that eerie green glow of the type beloved of science fiction television programme makers. The commands I had to type all started with CBS%. After that you typed the command.
It turned out that to send an email on the VAX/VMS machine you had to invoke the email program then write your text, then add the recipient’s adddress and then fire your email towards a ‘gateway’ that would forward the missive on to another network, and thus to the recipient.
If there was ever a conceptual void, I was now in one. I had no idea what I was doing and no help beyond the magazine and a few leaflets about JANET to guide me. I sat in front of the machine, like a chimpanzeee trying to teach itself myself a new language. I tried again and again and again, writing emails and seeing them bounce back as I failed to make them go anywhere. However dull this was, however frustrating, something at the back of my mind told me to keep trying. So I did. I kept returning to the monitor and after a week or more I made a breakthrough. I had somehow fired my first ever email through the correct portal and I got a response.
That email said, ‘Help’.
I got one reply.
‘Come now Ivan, that’s not very useful. What sort of help do you want?’
I stared at the screen. Somebody had replied. It worked.
The magic kicked in.
I typed ‘Help, help, help, help, help.’ I hit Return and waited. The next time I looked there were several replies. People from around the world were talking to me, replying to my email, giving me ideas and advice. They were friendly. I had made it through.
I stared into the screen, through the screen. A wave of realisation swept over me but it was the artist in me that understood what I had found. There was a world in there. This was an actual space, a place.
I COULD MAKE WORK IN THERE.
In that moment of revelation I saw and understood the world of cyberspace, the online planet. Eureka. I had it, I understood. If I had been naked in a bath I would have leapt out and run naked down the hall.
Later, my mind grappled with the potential of this new place. I had no real idea of how to access it, what to do with it or where it would lead, but I knew it was something real and that I had to explore it.

Get your signed copy of Attention Deficit with your name in the back among the list of supporters. 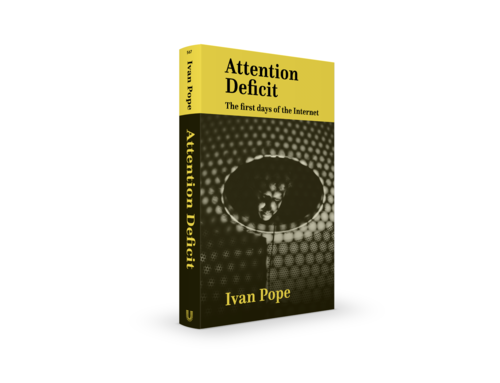 Where are they now? - plus signed