NOW IN PAPERBACK WITH ADDED MERCH!

As you've probably guessed I'm currently writing the book!  I'm not going to add anything else to that as I don't want to spoil any surprises for what's in it.  But be assured the games will be old, terrible, and you probably won't have heard of them.

Speaking of surprises, I still can't quite get over just how many truly fun-free gaming experiences were inflicted on us between 1980 and 1995.  I originally assumed there would only be enough for a few episodes of the web series, but I've discovered enough to fill four or five books.  My criteria for selection is simple: If it seems extremely unlikely that any reasonable person could garner any enjoyment from playing the game, then it goes on the List of Doom.

The entries in this book are ones that stuck in my mind for some reason after playing them.  I've tried to cover different formats equally to provide variety, but there were still a frightening amount to choose from.  Why did games publisher hate us so?

In less existential news, I shall reveal two more people who will be telling us of their most disappointing gaming purchase.  First up is Paul Rose AKA Mr Biffo, who many of you will remember as being the man behind super-popular nineties teletext gaming magazine Digitiser.  He'll be telling us how he messed up real bad by buying a certain ZX Spectrum game.

The second is Mentski, a retro-gaming man whose Games from the Chippy and One Credit Champ series are two of the best ways to learn about old arcade games.  You may not recognise his name, but I'm sure many of you will recognise his face.

If you have enough material to fill 4 or 5 books now, imagine how many books you could write in 20 years time when you look back at the bad games released now!!!!!! You'll have your own se tion in the library!!

Seriously, are you and Mentski just really good friends or do you find his face amusing or something? I've never really understood this as a running thing.

Can't wait for this to become a series of books then. With you writing them Stuart, they're going to be legendary.
Or at the very least, highly amusing.

If you make more books I will back every single one.

A signed bookplate, plus paperback edition of the book and an ebook 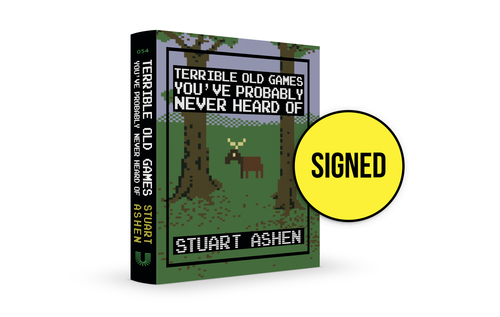