A tribal medicine woman must learn the truth of her past and the extent of her abilities to protect her people from invaders. 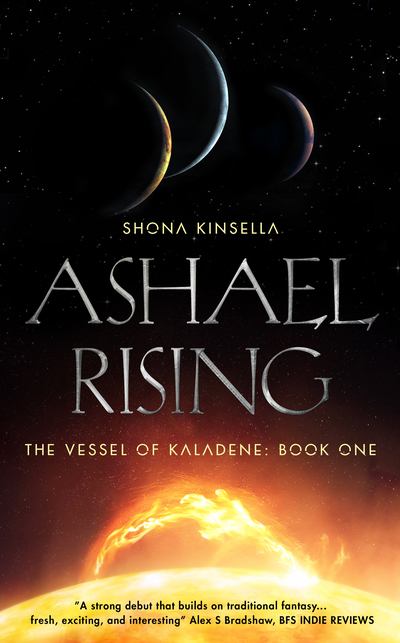 Fiction | Sci-fi & Fantasy
Rewards for this book are not available.

A handwritten thank you note from the author and signed page of the manuscript. Plus everything from Super Patron level.

Exclusive short story set in the world of the novel (PDF format). Plus everything from Super Patron level.

Lunch with the author in Glasgow. Plus everything from the Super Patron level.

Two hour Skype session with author for detailed critique of your fantasy manuscript (up to 50,000 words). Plus everything from Super Patron level.

Name a character in the book (final name to be confirmed in discussion with author to suit setting of novel). Plus everything from Super Patron level.

Ashael is a hunter-gatherer woman, apprenticed to Bhearra, the healer and spiritual leader of their tribe.

The Zanthar are invaders from another world who extend their own lives by stealing the life-force of everything around them. They were last seen on Ashael’s world 200 years ago. They have returned, looking for The Vessel, a being prophesied to hold the life-force of the land.

Iwan is a slave to the Zanthar, descendant of the folk that were taken as slaves the last time the Zanthar visited this world. He is sent out as a spy, while his mother is held hostage to ensure his compliance.

Ashael begins to experience strange and terrifying visions, around the same time that Iwan arrives in the village. After saving a child from drowning, Iwan is invited to join the tribe. Still under the control of the Zanthar, he begins to form attachments to the folk of the village and especially Ashael.

Ashael’s visions grow more powerful, interfering with her ability to carry out her duties. Bhearra fears these visions are prophetic and considers sending Ashael away to train with a seer in another village. Ashael does not wish to go, desiring nothing more than to continue her training in healing and to explore her growing relationship with Iwan. When Iwan realises that Ashael is the one the Zanthar are looking for, he rejects his mission and does all he can to shield her.

When Ashael slips away from a foraging party to have some time alone with Iwan, the rest of the group goes missing with no trace. Bhearra joins in the search for them and is caught in a powerful psychic trap which renders her comatose. Ashael tries to heal her but as time passes and she is unable to wake Bhearra, the situation grows dire. In her distress, Ashael taps into a power that she did not know she had and is able to save her mentor.

Ashael does not understand why the Zanthar would want her. She is frightened but wants to trade herself for the lives of the foragers. The question is raised with the tribe and they vote to keep Ashael in the village. Ashael is distraught but accepts their decision, until she has a vision of the foragers in their prison. She goes against the will of the community and exchanges herself for the foragers.

Only when she is a prisoner of the Zanthar does she discover the true nature of their plan, the terrible danger facing her world and her own role in protecting it.

Ashael Rising is a story of finding our place in the world, a story of relationships, with each other and with the land we live on.

"A wonderfully constructed novel, epic world building and a fantastic story... what more can I say?" — Peter Hutchinson, TheGrimDarkFiles

"Ashael Rising is an exciting high fantasy debut, with intriguing characters and excellent world building - an easy choice if you love fantasy!" — Sarina Langer, author of the Relics of Ar'Zac series

"This is a strong debut novel and the start of a new series. Kinsella has a sparse writing style that will not satisfy anyone who's after a wordy Hardy or Tolkien-alike and allows the more foolish of us to make some assumptions about this new universe. However, the prose flowed well enough to get me over my initial, jaded assumptions without much work and it is most definitely worth the time. This is not just a faux-medieval fantasy, but a stone-age people dealing with a much more advanced group of returning oppressors - who may be significantly beyond medieval if the series follows the potential "sword and planet" route rather than appearance of "sword and sorcery". Better still, the heroine turns out to be the shaman who rescues herself rather than the princess who waits in the castle." — Jo Thomas, author of 25 Ways to Kill a Werewolf