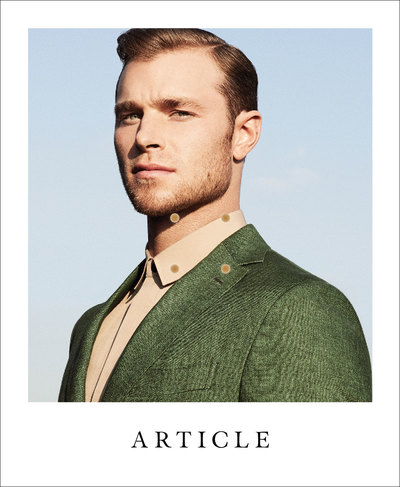 Everything included at the Launch Party level, plus two tickets to exclusive Q&A event with renowned British tailor Timothy Everest MBE. The content of this event will form the basis for a main feature in ARTICLE Issue One.

Everything included at the Q&A event with Timothy Everest level, plus 1 day of wardrobe consultancy and personal shopping in London with fashion director Kenny Ho

Why a new fashion magazine?
We’re tired of huge magazines that are 80% advertising for luxury brands. British style and fashion magazines weren’t always like that (think of The Face and iD). We think British readers deserve something better, smarter and more creative.

What is ARTICLE?
ARTICLE is a bi-annual men’s lifestyle magazine we plan to launch in Spring/Summer 2013 if we get your support. It will celebrate Britain’s contribution to fashion, art, design and culture.

With the recession has come a new way of purchasing. Now it’s all about quality not quantity. It’s about unique details, interesting and beautiful designs that transcend seasonal trends and clothes that reflect the character of the wearer.

The focus of is on British luxury brands, designers and artisans, who will feature through a series of witty, candid and informative editorials together with photo stories that are carefully art directed and conceived.

Without the pressure of having to please advertisers, we are free to do and say what we want. ARTICLE will showcase the names and ideas that are creating the British force in global fashion, art and design. We will also ask notable figures around the globe to give their take on British lifestyle and culture.

What makes it different to other mens’s lifestyle mags?
The visual design is more bespoke and fine art than generic, using artists, illustrators and fine art photographers as well as graphic designers to create the look. The aim is for each issue of ARTICLE to become a collector’s item, for example, we will ask Paul Smith to work with Supermundane to create the look for one edition with exclusive drawings and features. The print run will be limited: readers will feel part of the ARTICLE tribe rather than simply passive consumers.

Why would women want to read it?
We will build a team of contributors that write about men’s concerns and lifestyle in a balanced, witty and intelligent way. This will give women a genuine insight into the male mind and interests. Also, women enjoy reading about men’s fashion and stealing ideas…

Why Unbound?
By asking our readers to participate in funding, we are also offering the opportunity to contribute ideas and concepts so they can help to shape future issues of ARTICLE. Again, our aim is not to just gather readers, but create a community who share their energy and love for British style and culture with each other and form part of a historical moment in publishing: ARTICLE is the first ever crowd-funded biannual men’s fashion/culture/lifestyle magazine of its kind.

Readers who participate in funding the project also gain exclusive access to additional content virtually and in print, as well as the limited edition 'Collector’s cover' of ARTICLE magazine with bespoke foiled casing.