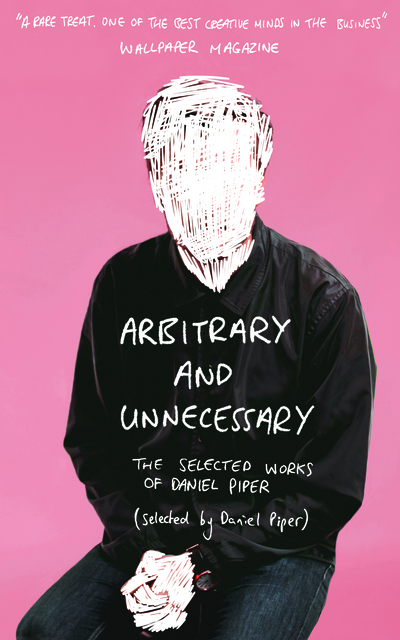 Humour | Poetry
You made Arbitrary and Unnecessary a reality. It's available in all good book stores now.
$7
24 pledges

You get a digital copy of the book. The e-book. Ebook? eBook? Ebuk? Ebuk.
Buy now

You get the delightful paperback edition of the book, the ebuk too and your name in the back of the book.
$25  + shipping
38 pledges

You get the delightful paperback and electronic editions of the book and your name in the list of Super Patrons in the front of the book.
$25  + shipping
20 pledges

A 1st edition paperback, the ebook edition and your name in the back of the book.
(Free shipping for EU addresses only.)
$35
2 pledges

You will immediately receive a digital copy of my first spoken word album, The Metamorphillip. In 2014, I sat down with several musical instruments (which I can’t play) and recorded 20 stories and poems. This rare recording is not available anywhere else, plus the ebuk.
$40  + shipping
10 pledges

You get a beautiful print containing a short story from my incredible Instagram page, @danielpiperwords. You also get the paperback book and your name in the front of the book

You get a beautiful print containing a piece of writing of about anyone or anything you like. You also get the paperback and electronic copies of the book. It would be a bit crap if you also had to buy the book separately.

You get the signed and annotated scripts for both of my full-length Edinburgh Fringe comedy shows, DANIEL PIPER IS IN FOUR GANGS (2016) and DANIEL PIPER’S DAY OFF (2017). You also get the book, with your name in the front.
$65  + shipping
1 pledge

You get a beautiful print containing a piece of writing of about anyone or anything you like, plus a very special video recording of the piece. I will use proper lighting, dress up smart and do my hair. You also get the paperback and electronic copies of the book, with your name in the front.
$75  + shipping
4 pledges

You get a personalised piece, but it is beautifully printed and presented in a frame for you to put on your wall. Much better than a crappy inspirational poster which says ‘carpe the day’ or something. You also get the paperback book and your name in the front of the book

You will immediately receive a beautiful analogue copy of my Instagram writing page, @danielpiperwords. This handmade square hardback volume contains 60 selected pieces, many of which are not included in Arbitrary & Unnecessary. Each limited edition book is signed and numbered. You also get the main book, with your name in the front.
$125  + shipping

You get one of the original posters which appeared in the windows of every Nationwide Building Society in the UK last summer after I read poetry for two of their TV adverts. My Dad is trying to get rid of this so please help. You also get the book, with your name in the front.
$190  + shipping

I will come and play a gig for you and your friend(s) in your house. It’ll be fun! Maybe I’ll bring some poetic or musical friends. I’ll also bring a copy of the book, which I will allow you to have.
$250  + shipping
4 pledges

Personalised piece in the bloody book

OMG. Deep breath before this one. Ok, right, so, you get a personalised pice of writing(erotic or non-erotic). But it’s IN the book. Like, PART of the book. So it could potentially be seen by millions of people. What better way to tell that special person you love them, or insult your boss?! You get the book too. I’m not going to put your piece in the book then not give you the book.

Right. Just, sort of, hold on to something or someone before reading this one. So, as well as the book, and your name in the Super Patrons at the front, you will get the original hand-written front cover print by me. There is only one of these in the world, and it will almost definitely be worth a lot of money one day. It’s a piece of history. Get in there fast. Once it’s gone, it’s gone. Okay, you can let go.
$315  + shipping
1 pledge

A dedication at the front of the book. There's only one of these also.

He’s been doing this for a while now and promoters keep asking if he has any merch to sell, so here - at long last - is the debut collection from writer, comedian and national poetry slam champion (almost world champion (he came second (first the worst, second the best))) Daniel Piper.

Arbitrary & Unneccessary contains over 150 pages of comedy short stories, poems and plays, as well as extracts from two smash-hit solo comedy shows, Daniel Piper Is In Four Gangs (2016) and Daniel Piper’s Day Off (2017).

You get the delightful paperback edition of the book, the ebuk too and your name in the back of the book.
View all 17 rewards