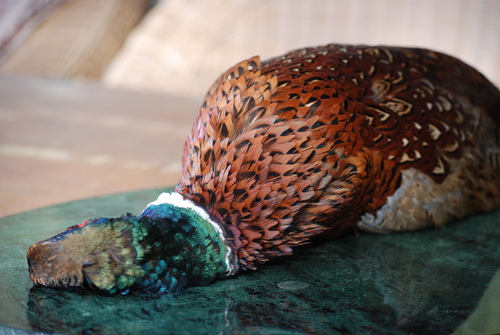 There’s a tradition where I live in rural Tasmania of swapping foodstuffs. It’s an edible black market, dealing in things from the river, the land and the larder. Over the years we’ve handed over or been the recipients of eggs, pork, salmon, venison, wallaby patties, Riesling. We once gained half a lamb when our retired sheepdog help round up a flock. I had nightmares about its forelegs sticking out of the freezer when I heard it was coming, but thankfully it arrived butchered and vacuum packed.

When we became artisan food producers and joined a farmers’ market everything went up a notch, and now it could be craft beer, sourdough bread or kombucha.

Now, we have been gifted a pheasant. The benefactor is a customer, Dr Jeremy, who likes Oliver’s bacon so much he buys a side at a time. He takes it on holiday with him to far flung islands and invites friends along for epicurean feasts. Dr Jeremy went on a pheasant shoot in Victoria and shot more than his own tastes required, so gave us a bird. 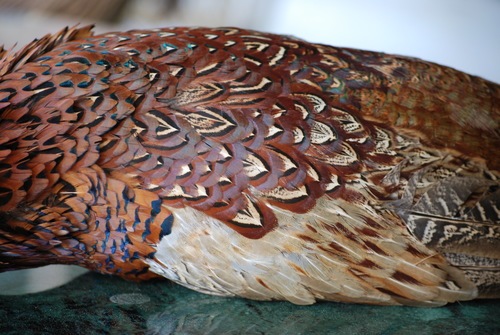 I collected it from the drop-off point, Launceston provedore Alps & Amici, where the girls were a little freaked out by the sight of a fully feathered dead pheasant, and had popped it on the floor of the cool room in a corner, with its head tucked under a cabinet, poor thing.

Wanting to do justice to the gift and the bird, we turned to the oracle on these occasions for advice – YouTube, and found a chef who demonstrated for the camera how to skin, fillet and cook it.

We set to work. Oliver peeled the bird, and before you go believing that I stood aside and let him do it out of some male/female role deference thing, let me just say that the last time we dispatched two of our cockerels, it was me that slit their throats while Oliver hung them upside down, because I’d seen it done badly with a knife that wasn’t sharp enough and I was determined ours should be done right, quickly, efficiently and humanely. Oliver was a little taken aback, but couldn’t deny it was useful to have two sets of hands. 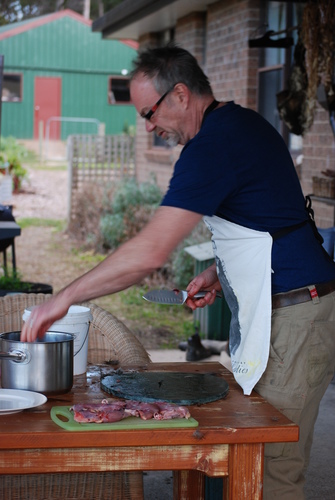 That was the last, and only, time we  dispatched our own, because once you have killed, plucked and gutted your own chicken you realise how much more convenient it is to simply buy them from your butcher.

So Oliver nicked the skin on the pheasant’s breastbone and peeled back the skin and feathers in a thick coat. It made a curious noise, a quiet ripping as of fabric. Some people might feel squeamish at the thought of it but it’s a noise that connects us to what we’re eating, reminds us that if we are to eat meat, something has to be prepared, butchered, for us to have that privilege. It’s a noise that our forebears have been hearing for more generations before us than we can imagine, and it connects us to our foodstuff. It’s a good noise to hear.

Once the bird was bare, Oliver butchered it, carving off the breast fillets and the legs. 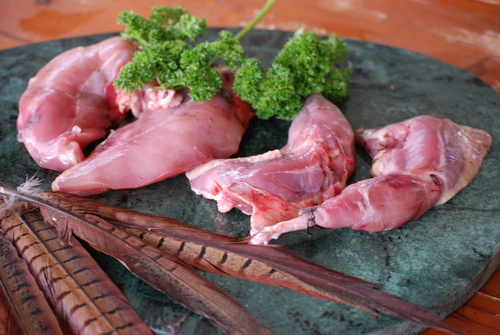 I cooked it, after finding a couple of recipes online and then making up my own version. I like to cook a dish such as this slowly and thoughtfully because I believe to do so allows time for the flavours to develop both in my mind and in the pot. After searing the meat, I cooked shallots and mushrooms, added white wine and cream and some chard from the garden, and cooked it all gently in the oven in a cast iron pot for a brief time.

If Dr Jeremy goes shooting again next year, and we’re lucky enough to have a second pheasant, I’d try a different recipe – with more of a jus rather than a heavy cream sauce. Even so, the dish was delicious, the meat like a cross between chicken and pork, with a good bite but not too chewy, and very flavoursome. We ate it two nights in a row, first with roast potatoes and then with rice. 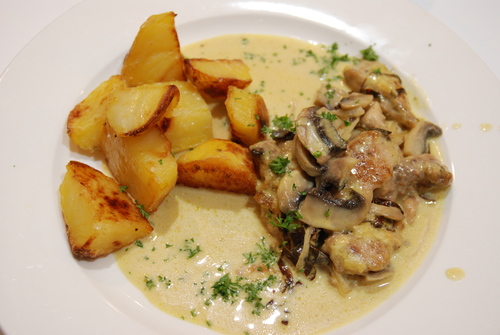 As consumers and diners, I’d say we’ve all become more educated and discerning about what we eat since people like Hugh Fearnley-Whittingstall and Matthew Evans have begun broadcasting, and we perhaps take more of an interest in the provenance of our food.

With meat it’s especially important. We know that pheasant would have lived a good life in the wild or on an estate and came to us near-organic and free range. We’re happy with that, and with the chance to have tried it, and cooked it.

We began our food journey when we moved to Tasmania, and Apple Island Wife has a few reflections on this theme – rather less pheasants, more rabbits and wallabies.

The sequel, Saddleback Wife, has pigs.