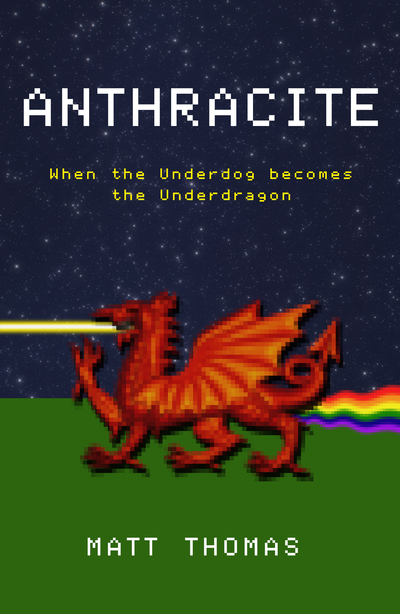 Humour | Sci-fi & Fantasy
You made Anthracite a reality. It's available in all good book stores now.
$15
40 pledges

1st edition paperback, eBook edition and your name in the back of the book.
$25  + shipping
20 pledges

1st edition paperback, eBook edition and your name in the list of Super Patrons in the front of the book. EARLY BIRD price, only 20 available.
$30  + shipping
40 pledges

1st edition paperback, eBook edition and your name in the list of Super Patrons in the front of the book.
$55  + shipping
9 pledges

Read WIth A Friend

10 x 1st edition paperbacks, eBook with up to ten names in Super Patrons list in front of book
$300  + shipping
1 pledge

Name a character in the book* plus 1st edition paperback, eBook edition and your name in the list of Super Patrons in the front of the book.
*may come to a bad end
Only 1 available
$450  + shipping
1 pledge

Matt will read your comedy or science-fiction manuscript (100k words max) and give feedback via Skype and a 2k report. Plus a 1st edition paperback, eBook edition and your name in the list of Super Patrons in the front of the book.
$600  + shipping

A talk from the author at Neath Antiquarian Society (South Wales), plus 1st edition paperback, eBook edition and your name in the list of Super Patrons in the front of the book. (Travel and accommodation not included)

Thank you on a dedicated frontispiece in the front of the book. Plus everything from Read With A Friend level. Only 1 available.

Stay-at-home deadbeat Kevin Jones finds himself kidnapped to an alternative reality where Wales is the single global superpower. Abducted from his mundane existence by the mysterious Gwen, she tells him powerful forces seek his destruction – he has to run or die. ‘The Tafia’ is after him, and they want to do more than leave a sheep’s head in his bed.

Gwen is a trans-world courier, a freelance operator surfing the backwaters of the Multiverse for the highest bidder. She’s a girl well used to breaking legs, as well as hearts – a girl with a past racing to catch up with her. Can she overcome her conscience, complete her mission and serve Kev up like a Christmas turkey for her dark clients to devour?

Kevin’s shady family are a whole flock of black sheep. Back in our world they’re small town criminals – gangsters straight out of Trumpton. Like most everything else in Gwen’s world they’ve had an upgrade. The mighty Jones Corporation runs a monopoly controlling the most valuable invention known to man. They’re not going to give it up without a fight. Meanwhile global Deep State rivals have other ideas.

Kevin learns his geriatric grandad is central the fork in destiny’s road. Back in the dying days of World War Two Isiah Jones lived through a bizarre chain of events, as the Third Reich crashed down around him. It’s up to Kevin to help Gramps confront the past, perhaps even to relive it. Turns out Kevin and Isiah’s story holds the key to why all worlds but ours turn out the way they do – Pax Cambria.

Ever wondered why there's not more Welsh comedy cyberpunk? Featuring a host of mysterious characters, cheese-on-toast based fast food, alt-right druids and a sprawling crime-family from hell, 'Anthracite' begins the long battle to set this travesty straight. Swansea has never looked more like Blade Runner’s L.A. It's already got the rain.

1st edition paperback, eBook edition and your name in the back of the book.
View all 10 rewards