Annabel Vs The Internet

The time I infiltrated Google HQ and other stories, as heard on Absolute Radio 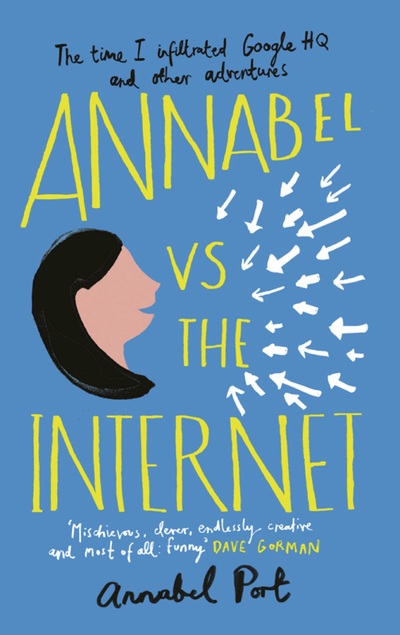 Humour
You made Annabel Vs The Internet a reality. It's available in all good book stores now.
$8
100 pledges

A first edition of the paperback plus the ebook
Buy now

A signed and dedicated first edition paperback with a handwritten note from Annabel plus the ebook and your name in the back of the book.
$45  + shipping

Two signed paperbacks (only pay shipping once) with a handwritten note from Annabel, plus the ebook and two names in the back of the book.
$150  + shipping
14 pledges

An extra three challenges made into a special handmade book just for you. Annabel will take requests. Please see video for quality of the handmade book. Plus a signed and dedicated first edition paperback with a handwritten note from Annabel plus the ebook and your name in the back of the book.

Over the past nine years I’ve been challenged to become a self-help guru, a prepper, a brand ambassador, a top model, a famous YouTuber and immortal. Yes, immortal.

I’ve found myself in in the editing suite of Britain’s Got Talent, sneaked around Google HQ in search of the ball pools, had my portrait exhibited in the National Portrait Gallery and been a real life shop mannequin at Mulberry.

A sensible question here would be why did I do all these things? The short answer is that my friend Geoff told me to. The slightly longer answer is that he told me to as he was worried that I was living my life to the min, rather than to the max. So he started setting me the challenges on the radio show we present together.

This book is a collection of my favourite stories from these challenges, written out in best and with lots of added extra bits.

I’ve sometimes been asked, “Do you really do all these things, do you actually do them?” There’s often an accompanying look in the eye of, “please tell me you didn’t actually do some of those things.” But I do always do them, mainly as it would be a much greater effort of imagination to make them up.

It helped that quite early on, I found that I had broken the thing inside of me that would previously been a barrier to me asking a stranger on the bus to scratch my back or pretend that yes, I really do have a two o’clock meeting with the financial director of Saatchi and Saatchi. I became quite fearless. And I also learned that generally people are much more lovely and kind and patient than I’d ever imagined before.