Now we were told, first, that a volume of extraordinarily original verse was coming out; now, that it was so shocking that its publisher repented its appearance...

Algernon Charles Swinburne was an English poet, born in 1837. His “volume of extraordinarily original verse”, entitled “Poems and Ballads”, was published in July, 1866. In my novel, in those chapters set approximately twenty years later, it is from this book that Diana reads to Penelope. (You can see these characters introduced in the extract from chapter two.) 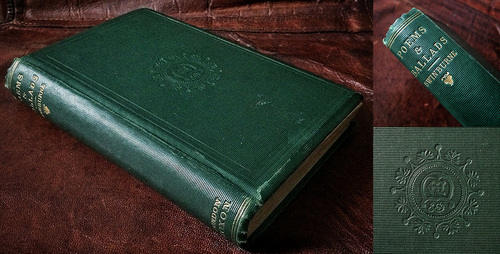 The original publisher of “Poems and Ballads” was Edward Moxon & Co. However, the book was almost instantly withdrawn due to a slew of negative reviews damning it for its licentiousness. This is less surprising when one considers that Swinburne’s topics included lesbianism, hermaphroditism and (hints of) necrophilia. There was quite the scandal about the whole affair. Here, for example, is the conclusion of a review from “The New York Times”:

We suppose there is some excuse for Mr. SWINBURNE. He aims at being a fashionable poet, and he may think it necessary to come before his patrons in fashionable clothes. But not the less does he deserve to be treated with aversion and abhorrence. Bad as the tastes of society may be, his book is an outrage even upon them, and it should suffice to cover the author with deep and lasting disgrace.

Well, it certainly contributed to ensuring that Swinburne was never poet laureate. Anyway, to continue the story…

In September John Hotten—who published, amongst other things, Victorian erotica—bought the unsold copies, gave each one a new title page with his name on it, and put them back on sale. When those copies ran out, in November, Hotten printed his own edition.

I managed to find two of the 1866 books. One is an 1866, Hotten reprint edition*. The other, shown in the photograph above, is more interesting. This is an original 1866 edition, published by Edward Moxon & Co., withdrawn from sale and bought by Hotten, whose replacement title page it bears. It is the binding of this edition which the Bespoke “Swinburne” Edition of “All the Perverse Angels” is intended to reproduce: you can pledge for it on the main Unbound page for the book.

My Moxon copy has two armorial bookplates, one with the name “Henry E. Butler” and another with the name “Mountgarret”. From these one can deduce that the volume belonged to either the thirteenth or fourteenth Viscount Mountgarret, both of whom had the same name. However, opposite Hotten’s stuck-in title page there is the signature of “Henry E. Butler”. In 1866 the elder Henry was already the thirteenth Viscount and would not have been signing his name in that manner (nor, I imagine, signing his books at all). It is a safe bet that the book belonged to Henry E. Butler, fourteenth Viscount Mountgarret, who was twenty-one when it was published.

The fourteenth Viscount was, as far as I can tell, quite an insular fellow. I did manage to find a section on him in “Yorkshire Leaders: Social and Political” (1908), which confirmed my suspicion that he attended Oxford. A result from a cricketing website recorded his playing for the Christ Church Cardinals in an 1866 game against Shropshire. (He was out for 18, caught by Sladen, bowled by Moore. The Cardinals won.)

So, my copy of “Poems and Ballads” was owned by the fourteenth Viscount Mountgarret, who was a student at Christ Church when it was published. I strongly suspect that it was bought at the time. This fits very nicely—right down to the specific edition—with the critic George Saintsbury’s recollections of purchasing his copy of “Poems and Ballads” and bringing it back to the ‘Ivory Towers’ of Oxford, recounted in his “Corrected Impressions” (1895):

Now we were told, first, that a volume of extraordinarily original verse was coming out; now, that it was so shocking that its publisher repented its appearance; now, that it had been reissued, and was coming out after all. The autumn must have been advanced before it did come out, for I remember that I could not obtain a copy before I went up to Oxford in October, and had to avail myself of an expedition to town to ‘eat dinners’ in order to get one. Three copies of the precious volume, with ‘Moxon’ on cover and ‘John Camden Hotten’ on title page, accompanied me back that night, together with divers maroons for the purpose of enlivening matters on the ensuing Fifth of November. The book was something of a maroon in itself as regards the fashion in which it startled people; and perhaps with youthful readers the hubbub did it no harm. We sat next afternoon, I remember, from luncheon time till the chapel bell rang, reading aloud by turns in a select company ‘Dolores’ and ‘The Triumph of Time’, ‘Laus Veneris’ and ‘Faustine’, and all the other wonders of the volume.

Saintsbury gave his extra copies to his friends Creighton (who went on to become a bishop) and Alleyne. Although he was at Merton he had friends in many colleges. Indeed, his closest and oldest friend was at Christ Church. Perhaps Henry Butler was part of Saintsbury’s “select company”, too.

Or maybe Henry used his volume for more romantic purposes. The only poem with a dog’s-ear is “Rondel” on page 148: “KISSING her hair I sat against her feet…”

You can pledge for the Bespoke “Swinburne” Edition of “All the Perverse Angels” on the novel's Unbound page.