I thought this might be a good time to look back over the past few years, to show you the journey from my thinking “something something painting something” to the book that will shortly be in the post. The special edition of All the Perverse Angels is very close to shipping to supporters. If it’s not sent in late December, it’ll be sent in early January. (The exact date is dependent on the schedule of the warehouse where, as you can imagine, things are hectic in the run-up to Christmas.)

So, here’s an All the Perverse Angels timeline and, as a bonus, a photograph of all my printed versions. 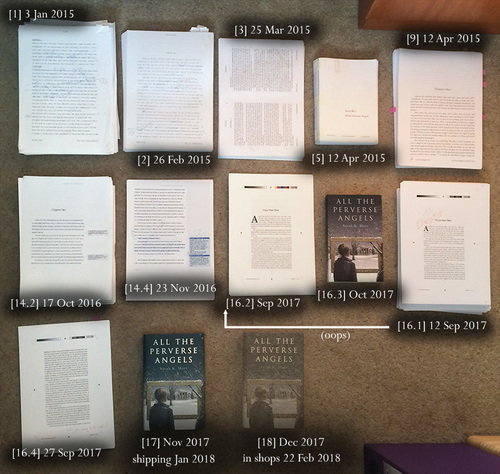 Against the… Hmmm. Fence? Tree? Tide? Wall? Yes! So, Against the wall…

The first printed drafts are produced. They have more blue and red scribbles on the pages than printed text.

[5] March — If I use staples and thread it will look like a real book.

Reader, it does not look like a real book. But five copies make their way to friends and family, for feedback.

I show the manuscript to Unbound, having met John Mitchinson and my future editor, Liz Garner, at an Unbound dinner for Erica Wagner's First Light. (John wrote about that, here.) The contract with Unbound is signed and crowdfunding starts on 30th June. Thankfully, for the sake of my sanity and the future of …Angels, the crowdfunding target is reached on 23rd September, clearing the way for…

Three rounds of structural editing with Liz (who is an amazing editor), to knock the overall narrative and 'flow' of the book into shape. My final draft for editing, [14.1], goes to Liz in September, and comes back as [14.2] in October. Rinse and repeat.

[Meanwhile]… December — "Hey, I just met you, and this is crazy, but here’s my manuscript, so represent me maybe?"

I meet the head of a literary agency at an Unbound party and send her the second structural draft of ...Angels a couple of days later. After a visit to their offices, I sign with Felicity Bryan Associates in mid-December.

(It's wrong.) Three rounds of copy editing, under the watchful and discriminating eyes of Anna Simpson and DeAndra Lupu. We are now deep within the territory of my saying, "I can’t believe I missed that."

The cover design process is underway. It starts with my sending a brief to Unbound in January, and finishes, after several iterations, in September. The full layout for the jacket is finished a few weeks later.

Three rounds of proof editing, working closely with DeAndra to make sure that the typsetting of the printed book hasn’t introduced any new errors. Oh, and a couple of grammatical errors that we spot. And a paragraph that doesn’t quite work. And a sentence which I suddenly consider dreadful. But mostly typesetting issues.

The version which goes into the proofing process is good enough to use for printing sample pages, [16.2], and for producing the proof copies of the book, [16.3]. The proof copies are sent to reviewers, and to authors who might provide cover quotes.

I meet Amy Winchester, Unbound's Head of Publicity, to discuss the marketing of February's trade edition. I also talk to Julian Mash, Unbound's Trade Marketing Manager, about targeting specific stockists. I also express a great deal of well-deserved gratitude to anyone in the Unbound office who passes within hearing distance.

The Unbound special edition is ready and a copy is placed in my awaiting hands. Right now (1st December) they—the books, not my hands—are sitting in a warehouse, waiting to be delivered in a few weeks’ time. Some of them will come to the Unbound office first, where I’ll sign them with my newly developed “book-signing signature” using a Sakura Pigma Micron 05 pen, with acid-free, archival, pigment ink. Because I care.

The trade edition will be ready and will be sent to reviewers. It has quotes from other authors on the jacket, and a price printed on it. The words inside are the same. It will be available online and in shops from 22nd February. Already have a copy? Why not treat a friend or loved one? Or buy a second one, for display?

Thank you so, so much to all the supporters of the book, and to those who will support it in the future. I’ll be sure to keep you updated in 2018. Remember, you can find me on Twitter and Facebook for more frequent updates.

(There now follows the word "save" several times, due to a bug in the blogging system. It is not a plea for help.)

I love the detail you share, particularly about your book signing choice of pen and ink! Fabulous!