Research suggests that most of us get them - those thoughts and images that pop up unbidden. For lots of us, they can be distressing and/or involve things that we might hypothetically do.

(It’s worth pointing out that intrusive thoughts can be a silly as they are awful. I read about someone recently who, whenever they saw a pigeon, was afraid they might grab it in both hands like a burger, hold it above their head, and RUN. A prize will be offered to the reader with the silliest intrusive thought.) 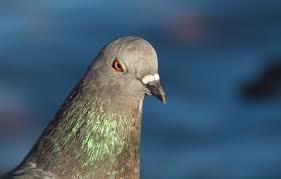 We don't want to do these things. They're fears, not intentions. That's why it's really common for new mums to have intrusive thoughts about harming their babies. My great aunt told me that, when she had her children in the 1950s, she used to keep the windows locked in case she hurled the baby out of the window.

We aren't going to do these things either, however much we fear that we might (luckily for dogs, babies, and pigeons). We just imagine ourselves doing them and squirm. But the thought pops up once and maybe it pops back. Maybe we try to push it away, to think of something else. Maybe it pops back again more insistently. Maybe we start to worry that we might actually do whatever it is.

My intrusive thoughts have always been a little noisier and more bothersome than most. I guess that's what comes of a vivid imagination and an anxious temperament. They really ramped up a notch when Arthur was tiny - video clips playing in my mind, a theatre between my ears, a stage upon which I or someone else was doing the most creatively, unspeakably cruel things to my baby, over and over and over again. I don't want to describe any of it. I don't want you to know. Ugh.

My imagination had always been the solace of my life and now it had turned on me. I wasn't even safe in my head anymore.

The thoughts receded gradually, like the tide going out. I found that if I pushed them away, mentally swept them off the stage in a clatter of props, that made them spring back and reassemble immediately. If I gradually drained them of colour and clarity until the scene was grey and grainy and indistinct, that was better. Best of all was to refuse to attach any possibility or meaning to them, to say: "It seems that my brain has decided to conjure up the most distressing thing it can think of. Yes, well done, brain - that is extremely distressing. Now fuck off."

This is what I worked out by trial and error.

The thoughts never went away entirely. Sometimes they bother me more than others. The news is the absolute worst thing for them. If I read or hear accounts of cruelty to children, or harm befalling children, my mind will assemble the scene and play it on a loop with my son in the starring role. He's every drowned refugee child washed up on the coast, face in the sand; every child sitting in the back of an ambulance, frozen in shock; every child kidnapped or tortured or bullied. As a parent, all you want to do is to keep your child safe, and you can't keep them safe in a dangerous world. The things that could happen.

I write this now because the coronavirus has set me off - and arguably rightly so. Experts are now predicting that the worst case scenario is likely and it's clear that the NHS is not equipped to deal with it. I'm not particularly concerned about my own health, despite being a fully paid-up asthmatic. It's the fear of infecting other people. Arthur gets a viral wheeze that, as a toddler, saw him admitted to hospital with common colds. It's improved as he's grown but we're still getting through the salbutamol inhalers. What if he gets sick - like, really sick? What if the NHS is already on its knees at that point? The scenarios all crowd around my bed at 3am, and the resulting hypervigilence is exhausting. It's exhausting to think 24/7 about not touching your face, to keep washing your hands every five minutes and disinfecting everything you touch. I wish I could hit pause and just be for a while. This bit is new, and probably over-conscientious, but it is also the advice of the World Health Organisation. The best anxiety therapy, I know, would be to touch your face and not wash your hands for a while and put the bleach away, then to observe that nothing terrible happens, but this hardly seems like the time to experiment with hygiene.

It's oddly reassuring to know that I'm not the only parent who worries like this, and that these are all very normal worries, although magnified somewhat. That I don't need to berate myself for being crazy. That's what helps the most - and that's the value of peer support, however you get it. I'm currently writing up some research on peer support in NHS perinatal mental health services, and while the tight timeline isn't helping me to be less anxious, it also feels like exactly what I should be doing right now. I'm looking forward to when I can eventually share it with you - as well as the book, of course! Have you seen we hit 60% this weekend? (If you haven't ordered your copy yet, please do and help make this happen!)

Love to all, and keep in touch.