I just wanted to let you all know about UK Maternal Mental Health Matters Awareness Week, which is happening right now! It's run by the Perinatal Mental Health Partnership, and AnotherMother has created this really rather gorgeous overview of the week. There are lots of opportunities to get involved, and discussions on topics such as breastfeeding and medication, post-adoption depression, peer support and groups for BAME families. Do go and check it out.

I have been a bit sceptical about awareness days/weeks in the past, thinking that awareness is a bit futile if nothing actually changes, you know? But I've come to realise that the former leads to the latter. And I think it's particularly important for maternal mental health: it's one of those things that people think they know about until it happens.

When I was pregnant, I considered myself to be pretty clued-up about mental health. I had a bipolar diagnosis. I'd been under mental health services for nearly fifteen years. I'd been in hospital. I had been there, done that, got the t-shirt. I knew about postnatal depression, and I knew there was something alarming called postpartum psychosis which I was trying not to think about. But when I developed PTSD, after the birth, I was having flashbacks, nightmares, panic attacks, horrifying intrusive thoughts... and I had no idea what was happening to me. I knew I wasn't depressed because I'd been depressed before and I knew what that felt like. This felt different. But it didn't occur to me that I might have PTSD, because that was something that veterans got, or people who'd been in natural disasters, genocide survivors. Childbirth is a normal human event. And that not knowing what was happening to me made everything so much more frightening.

The midwives didn't know about birth trauma, nor did the GP, nor the health visitor. This is why we need to raise awareness. It took so much longer for me to get the right help than it needed to have done, and that was why things escalated, and why I ended up having to be hospitalised. I very nearly killed myself and it makes me shudder, now, to think how close we were to an entirely different outcome. My son could be growing up without a mum.

It was Rosey - a mum who runs #PNDHour on Twitter - who very gently explained to me about birth trauma, or postnatal PTSD, and from there I began to understand what I was experiencing, and so I could pursue the help that I needed. From there I got the bed at the mother and baby unit which saved my life. This is the impact that talking about this stuff openly, that tweeting, that awareness-raising can have. 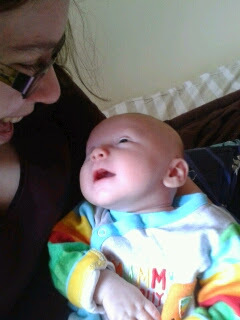 That photo was taken in the mother and baby unit in Winchester, in April 2014. I think it says it all really.

This is why I'm writing this book. I don't want any mum to be left in the dark the way I was. Please do support it by pledging, if you haven't already, and tell your friends. Happy maternal mental health awareness week!