I'm sorry for the radio silence; everything has happened. I've been thinking of you all often and wondering how you are. Do get in touch, if you'd like, and let me know how you're doing amidst all this. I would love to hear from you.

I came down with the virus five weeks ago and have been really quite poorly. I had throat and chest infections subsequently but managed to dodge hospital, thanks largely to the GP surgery's being wonderful and monitoring me closely at home. I'm much better now but am having to work (and parent) around lingering residual symptoms and post-viral fatigue. I've had to hit the pause button on many things, including the book, but am recovering well, if slowly, and gradually picking things up again.

I don't know what I thought living and parenting through a pandemic would be like, but probably not like this. Before lockdown was such a weird combination of normalcy and emergency. The bracing ourselves. The collective intake of breath. I was terrified, to be honest. Arthur had a lot of questions, the same questions we were all asking. I tried to balance preparing him for scenarios that were looking increasingly likely and getting him to take it seriously enough to wash his hands thoroughly (I've never heard anyone sing all of happy birthday that quickly; it was sort of impressive), whilst at the same time not frightening or upsetting him. That seemed to go OK, although mainly because he trusts me to keep him safe and is still too little to realise that my capacity to do so is limited by factors beyond our control. I'm dreading the day that dawns on him. There have been lots of conversations, usually in that twilight space before he goes to sleep which seems to be when he opens up about what's on his mind. He's been very sensible about everything and understands as much as any of us do.

Honestly, I've been winging it since the moment I realised I was pregnant. This is just more in that vein. 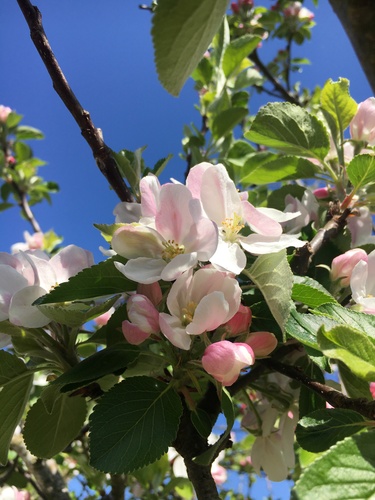 Lockdown with a six-year-old is challenging, but we are lucky in so many ways. We have a garden with a slide and an apple tree which has been particularly gorgeous in blossom this year. I'm glad I bought a trampoline with our Nectar points at Christmas - and, no, I haven't been on it: partly because I’m heavier than I look - very dense, me - and partly because I’m not at all convinced my pelvic floor is up to it. A global pandemic is bad enough without pissing yourself on a child’s trampoline. There's also a field near our house where everyone walks their dogs and where I'd take Arthur for a kickabout before I was ill. We didn't have a football - they aren't known for their longevity - so we improvised with a spacehopper, except the wind kept blowing it off course. Cue me pelting after a spacehopper. pursued by half a dozen excited dogs. Definitely not part of my mental image of pandemic.

The virus, in case you were wondering, is absolutely foul. Thankfully Arthur was only mildly ill - two nights of low grade fever; a bit of a cough and breathlessness for a week - but I was knocked horizontal for what seemed like forever, listening to the whirring of the air ambulances overhead, footballs thudding into fences. All my lovely homeschool plans flew straight into the bin and Arthur has largely been raised by YouTubers. I'm just now settling us back into a routine of exercise and education in the mornings, work for me in the afternoons, but with adjusted expectations all round. I keep overdoing it and landing myself back in bed, feeling as if someone is sitting on my chest with a sensation like an ice burn... I can't recall ever being wiped out for so long.

Meanwhile, life (sort of) goes on. The book was ticking along until I became ill, and we're 60% funded now. Thank you and welcome to all new supporters. I have lots of perinatal mental health news but I shall put that in a separate update soon. Be kind to yourselves, and keep in touch.

Hey Laura,
Sorry to hear you have been so unwell, praying its onwards and upwards now. If Arthur is anything like his pea loving baby sweetheart he will have loved a life full of YouTube!
Take it easy. Layla xxxx
PS The trampoline fears are real right???!!