If you’ve ever been referred to a psychiatrist, chances are you’ll have received a letter after every appointment. This letter is not addressed to you: it’s from the psychiatrist to the GP - about you. You are copied in. These clinic letters are one-sided and they are subjective, and subsequently they have the potential to be all sorts of upsetting. They can include observations about your appearance, judgements about your behaviour, and/or misrepresentations of your situation and of you as an individual. 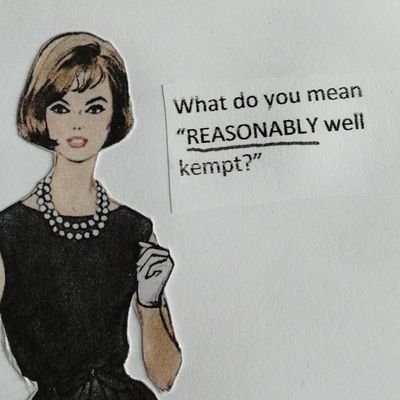 I was under various psychiatrists for about fifteen years and so I have received a lot of these letters. They always seemed to come when I was having a good day. I’d pop downstairs, or I’d come in from being out – and there, on the doormat, in a specific shape of envelope, the letter would be waiting. It induced a specific pit-of-the-stomach feeling of dread. I could have put it straight in the bin, of course, but then I risked missing something important. There were times, reading these letters, that I wondered if the psychiatrist had got names muddled and I was, in fact, reading an account of another person’s appointment. They could be so far from the conversation I remembered, from what I had said. I felt profoundly unheard and misunderstood and somehow lost: if the real Laura is invisible and everyone sees this other Laura in her place, does the real Laura even exist?

It turns out I wasn't the only one to resent these letters, as this conversation shows. People have begun comparing the rudest and most ridiculous statements from mental health professionals, commenting on everything from freckles to ‘hair is grey at the roots’. This has prompted a wave of ‘Dear GP’ letters: missives penned from the patient to the GP about the psychiatrist, mimicking the style of a clinical letter as people recall their worst and silliest appointments. The letters are hilarious and heartbreaking and extraordinarily powerful. I think this one from @RoseAnnieFlo is my favourite.

Here is my attempt:

I reviewed Dr S. on 07/11/2002 at the Child and Family Guidance Service. The reasons for his referral to this service are unclear, as is the nature and purpose of the service itself: it is presumably some branch of social services but seems to function, to all intents and purposes, like CAMHS. It may be commissioned to address attachment difficulties amongst mental health nursing staff, as they seldom remain in post for more than a few weeks at a time. Dr S. joined my caseload shortly after the departure of zealous Christian Steve – ‘I’m a registered mental nurse and it sounds like I’m a nurse and I’m mental, har har’ – and the arrival of his replacement, Sue. Dr S. did not seem to fully understand why he was there: when asked, his explanation was that Sue had ‘invited’ him – as if this were her disappointing fifty-fifth birthday party. He did not bring alcohol to the appointment.

There are significant, ongoing concerns about Dr S.’s ability to care for himself and to observe basic hygiene. His body odour is a heady combination of perspiration, curry, and milk left out of the fridge. Furthermore, during this appointment, he broke wind audibly no fewer than four times, and subsequently avoided my gaze by staring intently at the notes he was making. This – coupled with his physique, which resembles a hairy binbag filled with blancmange, spilling out between the buttons of his shirt – leads me to conclude that his diet is poor. He would benefit from occupational therapy input and perhaps a garden hose.

During the appointment, Dr S demonstrated confused thinking, lack of insight, and a tenuous grip on reality. Although I am quite clearly a fourteen-year-old girl, he has prescribed enough antipsychotic medication to tranquilise a woolly mammoth. When I expressed reluctance to continue the risperidone and quetiapine due to both their complete ineffectiveness and their disabling side effects (narcolepsy, lactation, restless leg syndrome, unstoppable nosebleeds), he suggested, instead, that the dose should be increased. Over the course of two appointments he has diagnosed me with the following: bipolar disorder, psychotic depression, paranoid schizophrenia, and schizo-affective disorder. When I suggested that it seems unlikely that I would have all of these at once, he waved his hands vaguely and broke wind again. I gave brief replies to his enquiries as I was trying to hold my breath. As we concluded the appointment, he informed me that I am to be admitted to an adolescent psychiatric unit, saying, “You will like it there.”

In light of the upcoming admission, it is not known whether I will have further opportunity to monitor Dr S. I remain concerned about his mental state and the likelihood that he will inflict harm upon others.

When I started writing All My Worldly Joy, it was supposed to be a book about pregnancy, birth, and early parenthood. But I rapidly found that none of it made sense without context, and that context was, in fact, the larger story. Traumatic events are not isolated: they are part of our life narrative, and trauma reawakens trauma. And, what’s more, everything that happened when I became a mother was so much more significant because it led me toward the resolution of twenty-five years’ worth of confusion and distress. This is the story I’m telling, and shitty clinical letters are a part of it. (If you would like to read my book and are not signed up already, the ‘pledge’ button is on this page. If you are signed up already, thank you!)

If ‘Dear GP’ resonates with you, you may wish to write your own letter and you can even contribute it to a zine. 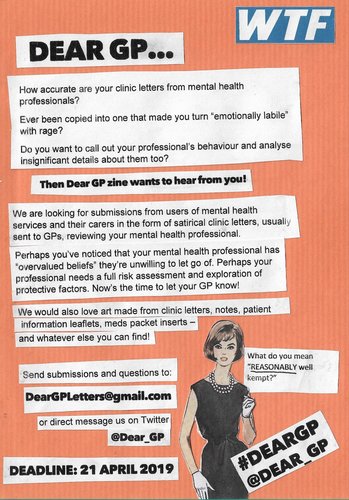 Thanks for being here.

Love this whole article and the links, all very insightful! Keep it up x