Breastfeeding, formula-feeding, and the NCT

Many of you will have been following the recent controversy around the NCT and infant feeding. The NCT president, Seana Talbot, resigned a couple of weeks ago, stating that she felt the charity was moving away from its original emphasis on breastfeeding and birth towards more generic parent support and perinatal mental health. Zoe Williams responded in the Guardian, citing the harm done by militant promotion of breastfeeding, and there were numerous letters in response. Hadley Freeman followed up thoughtfully in her column this weekend. This is all just the latest manifestation of an ongoing row around 'breast is best', and it's unfortunate, although not surprising, that the NCT finds itself right in the centre of it. I can't help feeling that what gets lost in all this are the mums and babies themselves.

The issue is so emotionally charged for so many of us, because it's rooted in our own experience at the most vulnerable time of our lives. During pregnancy, I was advised by my psychiatrist not to breastfeed because I was on antipsychotic medication. I feel, now, that this was bad advice but back then I didn't question it. It became irrelevant because I had that absolute clusterfuck of a birth and in my son's early weeks I was too sick to attempt it anyway. Arthur had a tongue-tie, which is when the strip of skin connecting the tongue to the bottom of the mouth is too short, restricting movement of the tongue and often causing feeding difficulties. It's fairly common, although Arthur was a severe case. He could barely feed at all: it would take an hour to get 10ml of formula into him. He'd keep falling asleep and the midwives had me tickling his feet, tickling his chin, every trick in the book. One midwife even ran her hands under the cold tap and put them on his belly to keep him awake while I was trying to feed him.

None of it worked. He was losing too much weight. He became jaundiced. The tongue-tie was the obvious cause but, because I wasn't breastfeeding, I was told we were "not a priority". They said I should wait until we got out of hospital, then take him to the GP and join a nine month waiting list for tongue-tie division (a procedure which takes seconds). But we couldn't get out of hospital while he was being treated for jaundice and I was still so unwell. He was quite literally starving. I was googling "private tongue-tie practitioners" from my hospital bed, frantic with worry. No one had the availability to see a bottle-fed baby. I phoned breastfeeding groups which offered tongue-tie division and was told I wasn't welcome. It was horrible. I felt like I was being punished for using formula - and, worse, that my baby was being punished. We got it sorted in the end, but this all contributed significantly to my subsequent mental breakdown, for which we were hospitalised when he was six weeks old. 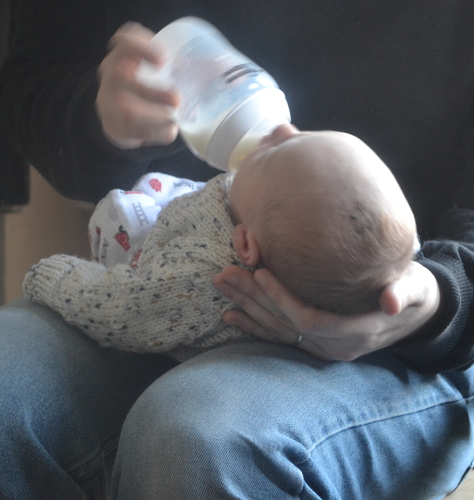 I'm sure that this isn't what even the most hard-line breastfeeding activist would want, but I'm aware that I carry those memories and those feelings into every conversation on the topic. Although I agree wholeheartedly that breastfeeding is a great thing, that it has health benefits, that women's bodies are amazing, that formula companies should be held accountable, that women should breastfeed wherever the hell they want, that the fight for better breastfeeding support is an important one, nontheless much of the breastfeeding promotion that I've seen - on social media and posters in the hospital and GP surgery - has made me feel like utter crap. The implication is that I let Arthur down, that his health has suffered because of my inadequacies. Is it possible to promote breastfeeding without making mothers feel this way? Perhaps not, although I still feel that some sensitivity in the wording wouldn't go amiss. It's about the audience: what you put in front of the government or NHS commissioners isn't what you give to a sleep-deprived mum with a screaming baby in her arms. Personally, I think that if we want breastfeeding rates to go up, we should stop trying to persuade, frighten, or guilt women into it, and better support those who are trying to do so.

The NCT actually does a fantastic job with this. They run an infant feeding support helpline, facilitate groups, and train breastfeeding peer supporters. Although my NCT antenatal classes were pretty dire, my experiences of the organisation since have been incredibly positive. I was on the advisory group for Parents in Mind, a pilot project which designed and delivered safe, nurturing, sustainable perinatal mental health peer support, and I attended the reception in Parliament for the #HiddenHalf campaign, for better six-week postnatal check-ups to provide mums with an opportunity to talk about how they're feeling. The NCT has a new emphasis on perinatal mental health, sure - but how is that not a good thing? Perinatal mental health and birth and infant feeding are not separate issues: they are connected, interrelating facets of the wellbeing of young families. Any approach which is not holistic is doomed to fail. And the NCT exists for everybody: parents should be supported regardless of how they feed their babies.

But I'm aware that I'm hardly objective on this one. I think what breaks my heart about the furore is that both sides essentially want the same thing. We all want healthy babies, who have the best possible start in life. We want healthy mothers, who feel confident in their ability to make the right decisions. We want good mental health for mums and dads, and strong parent-infant attachment, whether that's the result of a positive breastfeeding experience or an informed decision to formula feed. I hope we can keep this in mind, the next time someone on either side says or writes or posts something which is like a punch to the gut. I'll try if you will.