'A Sturdy Dame, and a Wilful'

You might remember that the title of this book - 'All My Worldly Joy' comes from a letter to Henry VII from his mother, Lady Margaret Beaufort. I think of her sometimes - 12 years old, newly widowed and heavily pregnant, alone and unprotected in what was then a lawless region. She went to her brother-in-law's for safety and almost died giving birth to Henry. She never conceived again, but devoted her life to getting Henry on the throne. I wrote about her for part of my PhD thesis, which was about vowesses: medieval women who took vows of chastity without joining a convent. They were uniquely half-religious, and when I started researching them I thought that must have been really difficult, to be half one thing and half another like that. It was something I related to, feeling always on the fringes of things: having come from a working class family and had a middle class education, being too gay to be straight and too straight to be gay, opting for joint honours degrees so that I was awkwardly straddling academic departments, hovering on the periphery of every social gathering.... I have never been a singleminded sort of person and never felt fully part of anything. As a teenager I was struck by the poem 'Presents from my Aunts in Pakistan', in which Moniza Alvi writes about being 'of no fixed nationality / staring through fretwork / at the Shalimar gardens.' Vowesses taught me that liminality can be a position of tremendous strength. You just need a bit of self-belief, and for others to recognise the value of what you're doing. I was explaining this - the bit about vowesses, not about myself - during a lecture a few months ago, and a woman put her hand up and said that she didn't think much of these vowesses, because "they wanted to have their cake and eat it too." I thought that it would be a shame to have cake and not be able to eat it.

All My Worldly Joy is not a book about vowesses, and yet I see them peeping around the corners of it sometimes. For example: in 1536, Agnes Smythe, a nun at Syon Abbey whose sister happened to be a vowess, prevented Henry VIII's men from getting their hands on the convent seal. (During the dissolution of the monasteries this was a big deal and would have interfered with the nuns' ability to communicate and receive income from their lands....) One of Henry's men wrote back to the king, describing Agnes as 'a sturdy dame, and a wilful'. Words to live by. Sometimes it just comes down to grit and sheer bloody-mindedness. I was sturdily wilful as I wrote up that PhD with a sick toddler who only slept in brief bursts, while my marriage endlessly circled the drain. I remember how the tiredness saturated me, like a sponge. I remember the tears pricking my eyelids at the slightest - or no - provocation. I remember staying away from my friends so that I wouldn’t be horrible to them. And I am sturdy and wilful now - and much happier. My friend Nikki embroidered the quote on to a t-shirt for me. 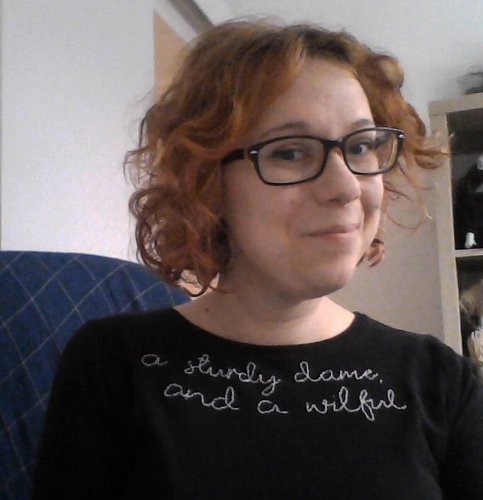 Pre-orders for the book are still coming in, but they're coming in slowly, and I'm concerned that Unbound might at some point decide to just release it as an e-book. I don't even read e-books! It would mean no lovely signed copies, no marketing and no copies in the shops... I would be so gutted. So I've switched tactics a bit and am now sturdily and wilfully applying for grants which would help with the costs of the first print run. Thankfully there are a few out there which specifically fund "hard to fund" projects and things that don't sit neatly into other categories. This book would have made such a difference to me and I believe it will really empower health professionals who are working with mums affected by trauma. Also, if all of you persuaded just one other person to buy a copy we'd be there, so please do spread the word amongst your friends and colleagues. I have no regrets about not going the traditional publishing route with this book: I wouldn't swap the freedom to be honest and 'unmarketable' or all of your support and community for the world. And I'm bloody well going to make it happen!

On that note, actually, some of you might also fancy Rory Hobble and the Voyage to Haligogen by Maximilian Hawker. It's a children's fantasy novel in which the protagonist has OCD, seeking to destigmatise mental health and social care involvement for kids. It looks really cool, and has until 11 March to fund, so do go and support it if you'd like.

Arthur will be six tomorrow - he's calling today his "birthday eve." He is very, very excited and will have a party at the soft play with all his friends from school. You might want to read the blog post I wrote last year about birthdays and birth trauma. I feel more overwhelmed than usual, but the PTSD symptoms are definitely getting easier every year. That said, their absence seems to magnify the sense of loss. I'm sorry I was so out of it when he was little. I wish I could get that time back. I am rather intensely enjoying him as he is before he gets any bigger. I want to tell you all about the next piece of peer support work i'm doing, specifically in NHS perinatal mental health services, but that will have to keep until next time!

Thank you all so much for being here.