Storytelling in the Medicine House chimney

It's a rare thing to sit in a chimney, these days; but I'm lucky to have had many evenings in the chimney of the Medicine House. "In the chimney" - what does that mean? you might wonder. Even if you are an admirer - of course you are! - of Alan Garner's work, you may not know that the Medicine House is part of his home, and now part of the Blackden Trust. Here is a photograph (by David Heke - thanks, David) to give you an idea; it is a timber-frame back-to-back chimney, with two flues, right at the centre of the house, 3m square at its base and 7m high, and it is a rare survival of such a structure. 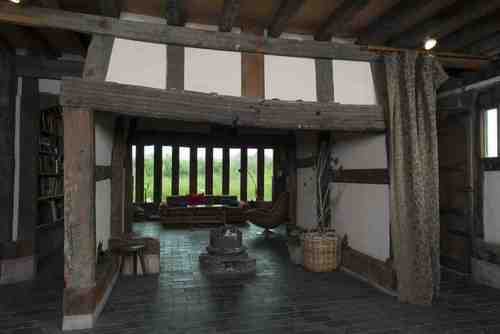 After the Great Fire of London, in 1666, such chimneys were (quite understandably!) banned; and even in this house, in the 18th century, the south west wall of the main timber-frame was encased in brick, concealing the complexity of the timber construction.

The story of how Alan and Griselda revealed the real structure, and rescued and moved the Medicine House, can be found here, on the Blackden Trust's website. It's a fascinating, remarkable story - and the work the Trust does (go on, keep clicking around the website!) is remarkable too. But if you become a true benefactor of First Light, then you too could take a look at the chimney from the inside. We're offering an evening of storytelling in the chimney, performed by the award-winning storyteller Nick Hennessey and, I can assure you, a spellbinding gent. This will be followed by dinner in the Medicine House hosted by author Elizabeth Garner, (Nightdancing, The Ingenious Edgar Jones) who is also a founder of the Blackden Trust. No, Alan won't be there for the supper - only for the pre-dinner drinks - but I can also assure you that no matter what, extraordinary things come to pass in that chimney; there is something about the space, which is both open and closed... the light of the fire, the sound of voices, the warmth of wood and stone... it is a place of revelation and no mistake. You think I exaggerate? I promise you, I don't. I close my eyes here in London and conjure it, sometimes, when I need that extra push - but as I said, I'm lucky. Oh, and one more terrific thing - Elizabeth is also offering editorial feedback on any creative work produced as a result of this magical evening.

Please click play on the audio link at the top of this post to hear Elizabeth and Nick talking about what's on offer.

So you could be lucky too. It's takes a generous contribution, I know that - we all do. And we are grateful in advance! We very much hope we might see you in the flickering firelight.

Please share this post and the project link with anyone you think might be interested in the book. We're 67% of the way there and it would be fantastic to get this book out there.