A walk to Ludchurch, with Alan, Griselda and Sir Gawain

Thirty-six per cent! It's hard to get much work done when you're watching the Unbound wheel roll steadily forward. Thank you all for your support: it means a lot to me, and to the Author we're banding together to celebrate, I know. Of course working on this book has made me reflect upon all the years I've known Alan and Griselda, and some of the adventures I've been lucky enough to share with them. One of the best (it's hard to choose) was a walk we had some years ago; I thought I'd share a little of that adventure with you.

I'm sure you know the poem from which I've lifted these lines:

Yes, that's right -- it's Sir Gawain, off to meet the Green Knight in his chapel. Bertilak's servant will follow no further; it's just Gawain and his trusty steed, alone in the wilderness. "So he gives spur to Gringolet and picks up the path,/ pushing on through, by a bank, at the side of a wood,/ rode down the rough slope right to the dale./ And then he gazed all about, and wild it seemed,/ and saw no sign of shelter anywhere near,/ but high banks and steep upon either side,/and rough rugged crags with gnarled stones;/ so the sky seemed to be grazed by their barbs."

This translation is useful to me, I admit; but a dozen years ago, reviewing a new translation of Gawain for me in The Times (for in those long-ago days I toiled there as literary editor) Alan Garner wrote: "I was fortunate in that I did not read Sir Gawain until I wanted to. And, as a native of Cheshire, I was puzzled at so many footnotes. I did not need them, apart from a few technical words that could not be inferred by context; neither did my father when I read extracts to him aloud. He could not have known that I was quoting Middle English. For him, we were doing no more than use our native speech, a speech that caused a well-meaning teacher to wash my mouth out with carbolic when I was six for 'talking broad'. Meeting Gawain as an adult showed me the irony. I had been taught to suppress my primary tongue. Received English had been imposed on me so that I might be educated and use that education; which now showed me what I had almost lost."

And then, not long after this piece appeared, Alan and Griselda took me there -- to the Green Chapel, I mean. The directions, Alan said, are in the poem, if you know how to look; they had been found too by the late Professor Ralph Elliott, of the Australian National University. Walking down towards the bright cleft in the rock known as Ludchurch, was something akin to time-travel; and when we arrived at this great natural half-cavern, hung all about with green -- well, it was astonishing. I've never seen anything so verdant, so glowing. Greengreengreen, is the only way I can express that vividness. I've held it in my head ever since, that sense of wonder and brightness and mystery, or tried to. And guess what? Clever Griselda took a picture of me, and Alan, down there in the chapel. Here we are. Makes me smile, still, to see it -- and I hope it makes you smile, too. 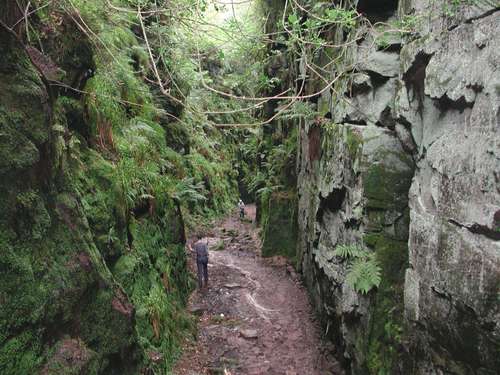 And it's a lovely walk over the Roaches to get there. Does Alan recommend a translation, or insist that we manage the Middle English?

Enjoyed reading that. Reading of the attempts to suppress Alan's "primary tongue" and the imposition of Received English reminded me of the great English poet, John Clare, who also experienced such treatment from "well-meaning" people; in his case editors and patrons. Best wishes for a very successful launch of "First Light" .