A visit to Cheshire...

And so to see the Garners on a frosty weekend. It had been too long since I was by Alan and Griselda's  fire -- and now we had plenty to talk about, with the launch of First Light coming next year. I can't say too much about our conversation because I don't wish to spoil the surprise. But photographs which have never been seen were part of our conversation -- our book is going to be rich visually as well as in every other way. 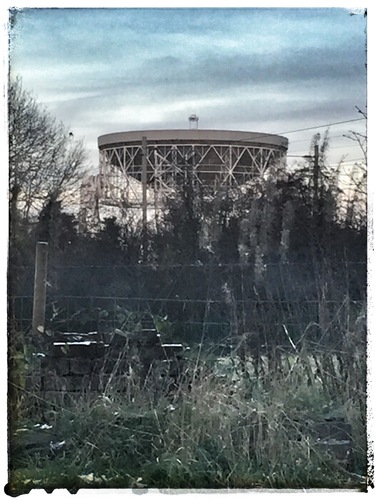 At one point we were discussing -- Griselda and I -- what makes Alan's work so extraordinary. I said what I believe: that it is unique. Alan, who is a stickler for accuracy, said: well, everyone's unique, and he is quite right, of course. But still and all, I hold to my belief -- seconded, I am sure, by every contributor to First Light -- that there is simply something special about the body of Alan's work that se parates it from everything else I have read. I wouldn't like to say what that "something" is because I know it's different for every reader; but readers of Alan Garner will know just what I mean, I venture.

You won't have too much longer to wait now. Speaking of photographs, here's a little something to tide you over: my (filtered, I admit) photo of the glorious Lovell Telescope, seen through Alan and Griselda's kitchen window! What a view, eh? Incidentally -- if you haven't watched the BBC Four Timeshift documentary on Sir Bernard Lovell and Jodrell Bank, you really must -- not least because you'll get to hear Alan talk about his friendship with Sir Bernard. It's on iPlayer for another month, so catch it while you can.