What’s in a Shed?

Many of the lovely people pledging for the Academia Obscura book on Unbound have asked me what the shed is all about.

A shed can be many things. A shed “can be anything from a dunny-sized construction to an aircraft hangar covering an acre or two”. It can be virtual, hewn from 0’s and 1’s and existing only fleetingly on your computer screen. In other, very specific contexts, “the garden shed is the death star”.[1]

A shed is “romantic for some, for others an escape from reality but always an expression of the owner’s personality”.[2] Sadly my shed is currently a perfect reflection of my personality: neglected due to my being overworked and underpaid!

The etymology of sheds dates back to Ango-Saxon time, when a “scead” (read “shade”) was simply a darkened or obscure place. These shady spots were the homes of hermits or wise men, as well as the storehouses for weapons.[3] In 1440 a “shud” was defined as a “schudde, hovel, swine kote or howse of sympyl hyllnge to kepe yn beestys”.[4] Thought to be the first recorded use of the word, a 1481 description of a garden refers to “A yearde in whiche was a shade where in were six grete dogges”.[5]

From these humble origins, the garden shed has become a British (and Australian and South African) institution. The shed is “the sort of place where, hidden away, secretive and sometimes furtive hobbies occur— model railways, woodturning, parafﬁn lamp cleaning— all going on undetected.”[6] The noble art of “tinkering” stereotypically takes place in a garden shed, where one can “take refuge from the social demands of the household to fiddle with pieces of wood or dismantled engines.”[7]

If shed life is productive, it can also be chaotic and disordered: “In the shed, the rules are different. Here, chaos is allowed to reign, asserting its creative force in wayward contrast to the suburban order all around.”[8]

Sheds can be a surprising metaphorical site for academic inquiry. In using the shed to explore gendered visions of technology, Bell & Dourish assert: “sheds have an epistemic authority vis-a-vis the home and thus represent an important starting point in any conversation about the nature of domesticity”.[9]

Indeed, despite the diversity of authors on Unbound tinkering and pottering around in their virtual sheds, the traditional shed is overwhelmingly viewed as a male domain. Sheds are “intimate places with a male atmosphere; partners forbidden”,[10] and the “mystical covenant between men and sheds” has held strong for centuries. Though the shed remains “thoroughly and quintessentially masculine space”,[11] female shed ownership in Britain does seem to be on the rise, and the embrace of sheds by women has “dramatically revived the fortunes of an imperilled institution”.[12]

In the right hands, sheds can also be works of art, as attested by Cornelia Parker’s awesome 1991 work Cold Dark Matter: An Exploded View (pictured). Parker transported an abandoned shed to a field, complete with disused tools and other assorted contents, and managed to convince the British army to blow it up.[13] She then meticulously arranged the pieces, suspended from the ceiling in a Matrix-like split-second view of the explosion. The light bulb used to illuminate the piece was allegedly retrieved, unbroken, from the wreckage. 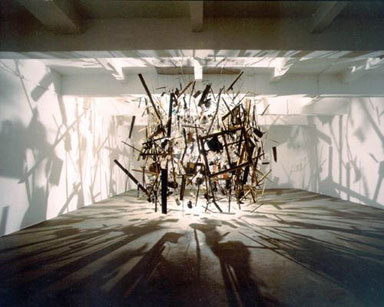 The Unbound shed is not the first to harbour writers: Virginia Woolf wrote A Room of One's Own, her famous essay on the importance of having your own space, in her shed. George Bernard Shaw’s shed had electricity and a telephone, and was built on a turntable so he could rotate it to follow the sun. Mark Twain brimmed with enthusiasm for his shed (well, more a cabin) in an 1874 letter:

It is the loveliest study you ever saw... perched in complete isolation on the top of an elevation that commands leagues of valley and city and retreating ranges of distant blue hills. It is a cosy nest and just room in it for a sofa, table, and three or four chairs, and when the storms sweep down the remote valley and the lighting flashes behind the hills beyond and the rain beats upon the roof over my head—imagine the luxury of it.

Twain’s enthusiasm for his shed is bettered only by the lyrical musings of Nick Drake in the beautiful Man in a Shed. After two verses of rickety-shed-as-unrequited-love metaphor, Drake concludes:

So leave your house come into my shed,
Please stop my world from raining through my head,
Please don't think I'm not your sort,
You'll find that sheds are nicer than you thought.

[7] Blackwell, A. 2006 Gender in Domestic Programming: from Bricolage to Séances d’Essayage.

[9] Thomson, M. 2002. The Complete Blokes and Sheds: stories from the Shed. Angus and Robertson.

[12] Langley, W.  Women are spending too much time in sheds, and not everyone's happy about it. The Telegraph.