An Update! An excerpt!

First, some good news! I have been writing like a tenured prof on sabbatical and have just handed over the first draft of the book to Unbound. I’ve also seen the first crack at the cover art and it is looking great - it’s got cats and beards and penguins and everything! So excited to share it with you all (soon, hopefully).

The bad news is that publication will likely not be until early 2017. I hadn’t realised that it would take quite so long to write a book (or just how much love and care that Unbound put into the production process).

Once again, thank you so much for supporting the book, and your patience – I’ll make sure I send lots of interesting snippets in the coming weeks. Here is one now, all about Paul Erdos:

The Erdős number pays homage to the incredibly prolific Hungarian mathematician Paul Erdős. Before getting onto the famed number, let’s take a moment to appreciate the man (and the myth), who Time called “The Oddball's Oddball”.

Erdős was a man of few possessions, and most of what he had must fit in a suitcase. He lived an itinerant lifestyle that required as much: He spent most of his life as a vagabond, traveling between scientific conferences, universities and the homes of colleagues all over the world. He earned enough in stipends from universities as a guest lecturer, and from various mathematical awards to fund his travels and basic needs, and donated awards and earnings to people in need and worthy causes.

He would typically show up unannounced at a colleague's doorstep. But rather than pop in for a cup of tea, he would announce "my brain is open” and stick around for long enough to collaborate on a few papers before moving on a few days later. A true academic, Erdős drank coffee in copious quantities. Unlike most, however, he also took amphetamines, which he felt were an essential part of his productivity.

Erdős’ publication list stretches to an eye-watering 1525 articles, and he collaborated directly with 511 people. It is from this incredible productivity and collaboration that we get the Erdős Number, which describes a person's degree of separation from Erdős himself, based on their collaboration with him, or with another who has their own Erdős number…

Unusual characters that might be said to have an Erdős number include:

And this little bit, about odd conference experiences:

Sarah J. Young recounts the Annual Conference of the Slovenian Comparative Literature Association, which took place as part of a big literary festival. The conference was held at Lipica stud farm in Slovenia, with the conference sessions in old stables, “surrounded by paddocks of dancing horses”. From the sublime to the ridiculous, the participants actually slept in a desolate hotel-cum-casino on the Slovenian-Italian border. She admits that it was a struggle to concentrate and that she was left with little recollection of some of the papers.

Daniel Jagger from University College London recounted the 2010 Midwinter meeting of the Association for Research in Otolaryngology, which took place, of course, at Disneyland: ”Goofy & Snow White waving at scientists in the lobby was weird… We booked a taxi to the theme park. We arrived in a stretch Humvee. With internal disco lights.”

The book will be illustrated by Jason McDermott (Red Pen Black Pen), with awesome drawings like this: 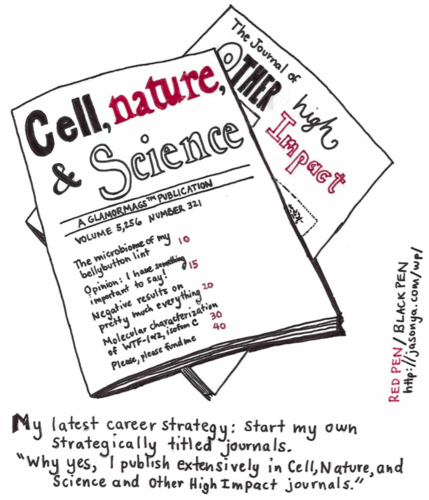 Finally, and assuming (perhaps optimistically) that they don't get cut, the book will have a lot of extremely random footnotes. Like this:

Peace, love, and the Oxford Comma,

PS. If any of you have a burning desire to give me your feedback on a chapter or two and get a sneak preview in the process, feel free to drop me a line – glen@academiaobscura.com