If #AcademicsWithCats has taught us anything, it is that academics, like everyone else with an internet connection, love cats. But the academic–cat relationship predates the social media era by hundreds of years. Emir Filipović from the University of Sarajevo was trawling through the Dubrovnik State Archives when he stumbled upon a medieval Italian manuscript (dated 1445) marked clearly with four paw prints. 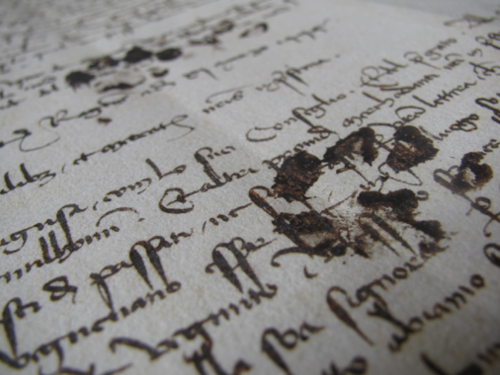 It could have been worse. Around 1420, one scribe found a page of his hard work ruined by a cat that had urinated on his book. Leaving the rest of the page empty, and adding a picture of a cat (that looks like a donkey), he wrote the following:

Here is nothing missing, but a cat urinated on this during a certain night. Cursed be the pesty cat that urinated over this book during the night in Deventer and because of it many other cats too. And beware well not to leave open books at night where cats can come.

Though occasionally ruining manuscripts, cats undoubtedly saved a great deal of invaluable works by hunting mice that would have otherwise had a field day feasting on the paper. Others, like Jordan the library cat, have taken a less ambitious approach to academic life. Jordan’s home is the Edinburgh University friary, but he hangs out in the library, where students fawn over him as he sleeps in his favourite turquoise chair. He has his own Facebook page and the library has even issued him a library card.

One curious cat has outshone all other academic animals. F.D.C. Willard has published as a co-author and, incredibly, the sole author of papers in the field of low temperature physics.

When American physicist and mathematician Jack Hetherington was told that he needed to eliminate the use of the royal ‘we’ in a paper, he was reluctant to retype the entire manuscript (this was in the days of the typewriter, so rewording the paper would have been a considerable undertaking). To save time, he simply added his cat as a co-author. Concerned that colleagues would recognise Chester’s name, he concocted a pen name: F.D. for Felis domesticus, C for Chester, and Willard after the cat that sired him. The joint paper was published in Physical Review Letters in 1975 and has been cited about 70 times.

When his complimentary printed copies arrived, Hetherington inked Chester’s paw, signed a few, and sent them to friends. One of the copies found its way to a colleague who later recounted that a junior physicist on a conference organising committee proposed inviting Willard to present the paper because ‘he never gets invited anywhere’. Hetherington’s colleague showed the committee his signed copy of the paper, whereupon everyone in the room agreed that the paper appeared to have been signed by a cat. Neither Willard nor Hetherington was invited.

‘Shortly thereafter a visitor to [the university] asked to talk to me, and since I was unavailable asked to talk with Willard’, Hetherigton later recalled, ‘Everyone laughed and soon the cat was out of the bag.’

Some years later, Hetherington and his collaborators were struggling to agree on the finer points of an article they were working on. With none of them ultimately willing to sign off on the finished product, they pulled Willard out of retirement and named him as the sole author of the paper, which was eventually published in the French journal La Recherche.

Willard was considered for a position at the university and, in honour of his contribution to physics, APS Journals announced (on 1 April, 2014) that all feline-authored publications would be made open access. The announcement reads: ‘Not since Schrödinger has there been an opportunity like this for cats in physics.’

In the acknowledgements section of their books and papers, researchers have thanked everyone from Rocco Siffredi (an Italian porn star) for his ‘constant support’, to the thrash metal band Slayer for ‘continued advice and inspiration’, to Jon Frum (a cargo cult deity). Computer scientist Guillaume Cabanac thanked his daughter for helping to collect data, though in reality she was four-month-old baby sleeping by his desk, while a couple of Barcelona fans working in the US managed to sneak in their home football chant, ‘Visca el Barça!’ Three Italian researchers went as far as including a unique ‘unacknowledgements’ section in their paper:

This work is ostensibly supported by the Italian Ministry of University and Research... The Ministry however has not paid its dues and it is not known whether it will ever do.

Unsurprisingly there are a few that focus on funding. Sci-fi historian Adam Roberts wrote:

Let me record that I am not in the least grateful to the British Arts and Humanities Research Board – A plague on their house. That this book was ever completed owes nothing to them at all.

Evolutionary biologist Leigh Van Valen, who was ‘considered unconventional even by eccentrics’, wrote:

I thank the National Science Foundation for regularly rejecting my (honest) grant applications for work on real organisms, thus forcing me into theoretical work.

I blame all of you. Writing this book has been an exercise in sustained suffering. The casual reader may, perhaps, exempt herself from excessive guilt, but for those of you who have played the larger role in prolonging my agonies with your encouragement and support, well… you know who you are, and you owe me.

Unacknowledgements sometimes include passive-aggressive barbs aimed at those the authors feel have wronged them:

• ‘We would like to thank Karla Miller for sleeping late one morning, leaving Tim and Steve a bit bored.’ (They also thank one Saad Jbabdi for ‘making the brains look pretty’.)

• ‘I thank Graham Higman for allowing the dust of Oxford to rest on my unopened manuscript for thirty months.’

Others explain the curious circumstances surrounding their work:

• ‘Most of the paper was written during my daily commute from Vancouver to Surrey, Canada, and I would like to acknowledge TransLink Metro, Vancouver’s regional transportation authority, for making the task of writing in buses and trains such an enjoyable exercise.’

• ‘If the book is not a success, I dedicate it to the burglars in Boulder, Colorado, who broke into our house and stole a television, two typewriters, my wife Helen's engagement ring and several pieces of cheese, somewhere about a third of the way through Chapter 8.’

• ‘…would also like to thank the US Immigration Service under the Bush administration, whose visa background security check forced her to spend two months (following an international conference) in a third country, free of routine obligations – it was during this time that the hypothesis presented herein was initially conjectured.’

• ‘Research supported in part by the Federal Prison System. Opinions expressed in this paper are the author's and are not necessarily those of the Bureau of Prisons’. (The author, Chandler Davis, was serving a prison sentence for refusing to cooperate with the House Un-American Activities Committee.)

There are, of course, those who like to genuinely thank their loved ones:


This book is dedicated to my brilliant and beautiful wife without whom I would be nothing. She always comforts and consoles, never complains or interferes, asks nothing, and endures all. She also writes my dedications.

Caleb Brown from the Royal Tyrrell Museum helps us end this section on a positive note. His acknowledgements in a Cell paper describing a new dinosaur read:

C.M.B. would specifically like to highlight the ongoing and unwavering support of Lorna O’Brien. Lorna, will you marry me?