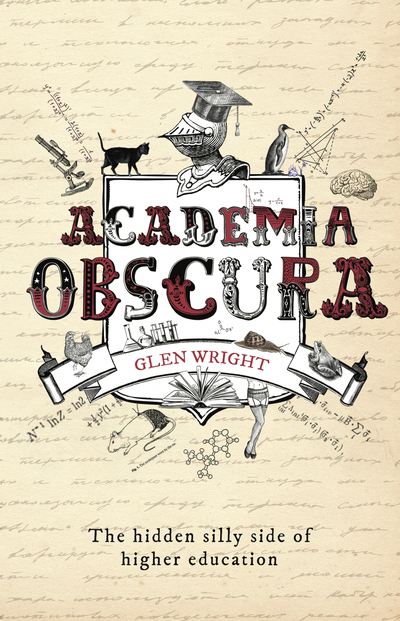 Humour
You made Academia Obscura a reality. It's available in all good book stores now.
$8
174 pledges

For a limited time only get the signed hardback edition for a special price, ebook edition plus your name in the back of the book
$75  + shipping
24 pledges

Everything up to the signed level, plus a certificate naming you as a Doctor at Academia Obscura
$150  + shipping
1 pledge

Everything up to the signed level plus your cat will receive a professorship certificate, a mortar board, a collar tag and an acknowledgment at the front of the book
$150  + shipping
5 pledges

Everything up to the signed level, plus Glen will come to your institution and give you a lecture like no other. Travel and accommodation are covered within Europe
$190  + shipping
4 pledges

Everything up to the signed level plus one of your papers (real or fictional) will be cited in the book, thereby increasing your h-index. Probably.
Only 4 available
$225  + shipping
5 pledges

Everything up to signed level, plus a brass desk plate naming you as Head of Department of something obscure from the book
$3,000  + shipping
1 pledge

Everything up to the signed level, plus a frontispiece for your institution

Academia Obscura is an irreverent glimpse inside the ivory tower, exposing the eccentric and slightly unhinged world of university life. Take a trip through the spectrum of academic oddities and unearth the Easter eggs buried in peer reviewed papers, the weird and wonderful world of scholarly social media, and rats in underpants.