A Virtue Of Disobedience

A meditation on oppression & authoritarianism, reflecting how faith & virtue can lead to liberation 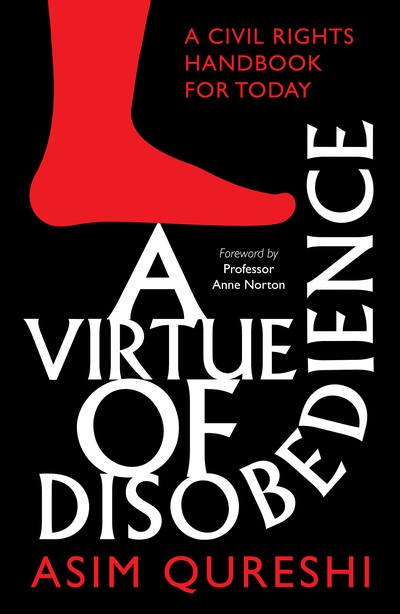 Non fiction
You made A Virtue Of Disobedience a reality. It's available in all good book stores now.

1st edition paperback and your name in the list of Super Patrons in the front of the book.

Signed, 1st edition paperback and your name in the list of Super Patrons in the front of the book.

1st edition paperback and your name in the list of Super Patrons in the front of the book. EARLY BIRD price, only 20 available.

A single ticket to Byline festival, 23-26 August: for all four days at the festival at Pippingford Park, Nutley, East Sussex, TN22 3HW. Byline Festival is a mix of talks, comedy, music and workshops set in a forest that attracts families, journalists, writers and activists. Asim Qureshi will be talking about his book.

A family ticket (2 adults and up to 4 kids) to Byline festival, 23-26 August: for all four days at the festival at Pippingford Park, Nutley, East Sussex, TN22 3HW. Byline Festival is a mix of talks, comedy, music and workshops set in a forest that attracts families, journalists, writers and activists. Asim Qureshi will be talking about his book.

In times of political crises and repression, the state has often resorted to emergency powers, often directed at specific suspect communities. Whether it is the period of Nazi Germany, the black civil rights movement, Apartheid or the Troubles in Northern Ireland, there has been a tension between the way that power exerts itself and those who seek to resist the excesses of the state.

Movements seeking rights and equal treatment before the law produced vast amounts of literature to intellectually describe and challenge the epistemology and discourse of their periods – they formed a body of resistance literature that has been crucial in formulating what we consider today to be among the most important works on anti-racism and anti-tyranny.

As a Muslim, whose adult life has been spent largely responding to the excesses of the global War on Terror – I have found there has been no Muslim-centred response to these same challenges. This is needed, as there are differences. Muslims are not located in one region of the world, nor are they comprised from one specific ethnicity – so how can we understand what a doctrine of resistance might look like in light of those differences? Many Muslims resort to the politics of post-colonialism as their way to make sense of the world around them, except post-colonial responses largely imagined the nation-state, something that is perhaps out of congruence with a community that has international connections and concerns.

Further, the issue for Muslims is compounded by a class of scholarship that preach quietism in the face of despotism in the East, and a non-confrontational approach in the West. Doctrine is used politically and religiously to neutralise any dissent to the state, in whatever circumstance this might occur.

I am concerned by this, and history teaches us that this is not how human beings should respond to authoritarianism. I want to study the movements of the past and learn lessons from their plight, but more importantly, their resistance. I want to understand how they went about enforcing the morality of the law, in a circumstance where it was being structurally decimated. I also want to understand how the past is connected to the present, and so want to look at the killing of Philando Castile in the US, the Grenfell Tower fire tragedy in the UK and the general state of political violence in our world.

This book is an attempt to reflect on the world we live in, and by using the Qur’an and the traditions of the Prophet Muhammad, to posit a notion of virtuous disobedience, one that is not only congruent with the teachings of Islam, but also true to the history and experience of others who have fought for the rights we are seeking. This book does not attempt to provide all the answers, but to start a conversation about what the status quo is, and what philosophies we can adopt in furthering rights for ourselves and others. Do the scholars have it correct, that we must wait for the hereafter for justice, or as the actor Jessie Williams states, ‘the hereafter is a hustle’. I want to ascertain the lines of intersection across all of these moments, in the hope that the conversation can shift beyond the ‘good Muslim bad Muslim’ reductionisms that currently set the discourse. My hope is that by being disobedient to authoritarianism, we can put forward a claim to being obedient to justice.

Collaborators
- A four-point method developed to assess complicity with injustice
- Reflections on state sponsored trips to Israel in the US and UK
- Thoughts on the resisting roles played by Ilhan Omar and Rashida Tlaib, the first Muslim Congresswomen in the US.

Byline Books is a publisher and part of the @Byline_Media family. We create the first draft of history. Meet us at @BylineFest Read more at:https://www.byline.com/journalist/bylinebook/biography