Nothing new to report on the book front yet I'm afraid. I'm still waiting for an editor to be appointed. But, in the meantime I thought we'd have a bit of fun :D

Yesterday I went to my favourite bookshop in nearby Penn village (this amazing place) and, among the bargains I picked up, was this - The Complete Home Entertainer. 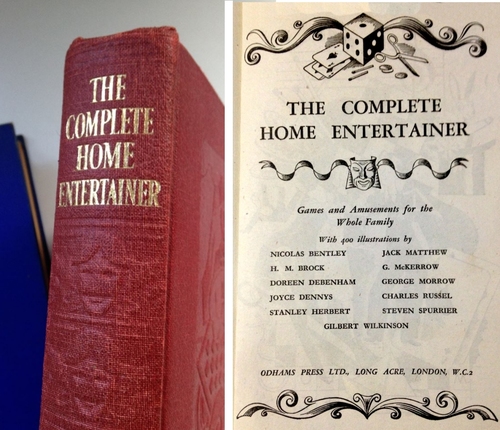 It's a great little book published around 1940 and is full of puzzle, games and things to make and do. But imagine my delight when, in a section called 'Rub Up Your Wits' (!) I came across a section of murder mysteries for us amateur sleuths to solve! It was the clincher for buying the book to be honest.

So, do you fancy having a go at solving a crime? If you enjoy it, I'll post some of the others (there are 10 of them).

We begin with The Loan Office Murder. Click on the images to see a larger version  of each page. I'll also include zoomed versions of the illustrations - if that helps!

I'll publish the book's answer in my next shedpost. 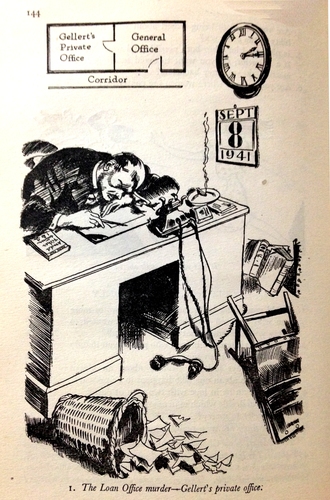 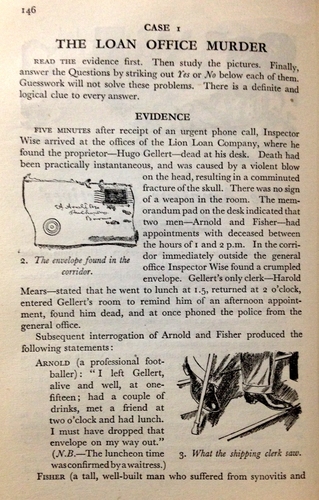 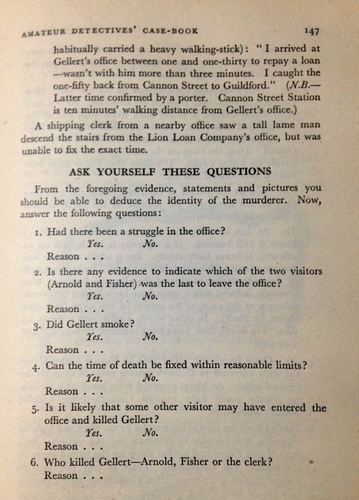 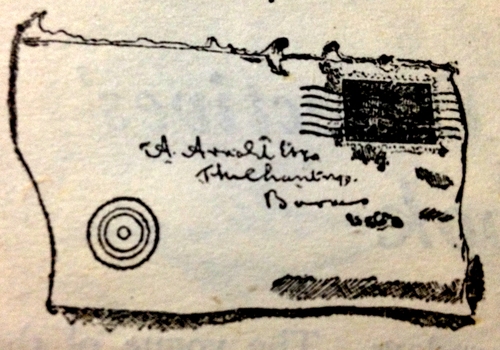 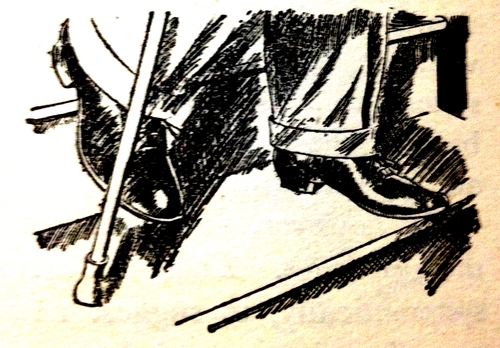 Hmm.
Things of note.
The cigarette in the ashtray is still lit. Smoke is coming from the end, not from behind a column of ash as would form if it had burned diwn untouched. Not sure how long than means (I don't smoke) but that makes me think the murder was after two, rather than the latest possible times given by Arnold (2pm) or Fisher (1:50pm), both times corroborated by witnesses.

If there was a struggle, Gelert went back to his desk afterwards and sat down - and was then slain.

I think Gelert was on the telephone shortly after 2pm when he was killed and dropped the handset. The killer removed the murder weapon from the room.
The choices are the clerk or a fourth person. Leaving aside the fact that an unlisted suspect would be cheating, the clerk said he found Gellert dead at 2pm and I think the cigarette says he died after that.

Or the clerk sat down for a fag while awaiting the police....

I to think the struggle was staged for the reasons given above and because the pen is still in Gellert's hand. The cigarette is interesting because based on the pen being in his right hand I would have expected the cigarette and ashtray to be on the righthand side to. It looks to me like they belong to a visitor to the room.

Arnold left first as he dropped the envelope and then Fisher marked the envelope with his walking stick. If Arnold was the killer Fisher would have called the police when he arrived.

I think it has to be Fisher or the clark.

The time on the clock suggests that the police arrived at 2:15 and were called therefore at 2:10. If the clark got back at two and went straight in to see Gillert why did it take ten minutes to call the police? I think the clark killed Gillert ( lit the cigarette and set the scene) in those ten minutes.

I agree with Pat,

clock says 2:15, the cigarette is lit and in the ashtray - not burnt down - so hasnt been there long - also it hasn't been knocked over in the 'commotion' - which would seem to have occurred after the murder.

From the pic but it appears the man using the cane doesn't need it - so I suspect its not Fisher and it's not a cane but the murder weapon being snuck out by Mears the clerk.

Yup I agree with everyone else that the clerk did it. The room is clearly staged cos the fella is at his desk and was hit from behind. If some lad had started smashing up the office, he'd probably have stood up.

People normally smoke with their non-dominant hand, so if he was right-handed he'd probably smoke with his left, so I'm not sure that's a correct clue BUT, I think the ashtray was the murder weapon regardless, as it clearly hasn't been examined since there's a lit cigarette in there, which would've burned out by the time the inspector got there.

The fella with the walking stick almost certainly couldn't have hit anyone hard enough to fracture their skull if he had synovitis, and the first guy would've had to come back again to kill him, which suggests meticulous planning along with the staged crime scene, so randomly dropping an envelope seems like a mistake he wouldn't make.

The cigarette makes the presence of a fourth party unlikely as the clerk would've bumped into him in the time frame this would've all taken.

I'd also suggest that Fisher was there first, at one pm, then Arnold, because if there'd been a discarded envelope outside the office when Fisher got there, he'd have probably picked it up or said something in case it was important to Gellert. Also, the notepad on Gellert's desk.

The other evidence that excludes a fourth party is that if someone entered the office who Gellert wasn't expecting, he would've almost certainly risen from his desk.

I also think that if either Arnold or Fisher had killed him, they would've removed the memo pad with their names on it.

Oh oh oh, the inspector found the crumpled envelope himself too! This further implicates the clerk, either suggesting he planted it after the crime, or was focused on something. If there was a crumpled envelope on the floor at his place of work, the clerk would *certainly* have picked it up and checked it, at this point being unaware that his employer was dead in the next room.

Well, didn't you all do well! Check out the next shedpost for the 'official' solution and Murder Mystery #2!

The clerk phoned from the general office - would that have been possible if the handset was already off the cradle on Gellert's desk?