Two Colgans for the price of one

A Murder To Die For is a very personal project for a number of reasons. As I explain in the video it combines three things that have had a profound influence on my life: my 30 year police career, classic murder mystery, and my deep love of comedy - particularly British farce. But there is a fourth thing.

In the early 1980s, he’d met the extraordinary Dame Daphne du Maurier who was living in Tywardreath near Fowey and I can still remember how childishly excited and inspired he was after discussing writing with her. He immediately began a year, maybe 18 months, of pre-internet research to fully understand the historical background for his book and to give it a real world in which to operate. Set in 1931 and titled The Chief Constable Regrets, his tale involved the systematic murder of surviving members of a platoon from the Duke of Cornwall’s Light Infantry who had fought together in WWI. I can remember long telephone conversations with him as he told me about some fact he'd gleaned and how he planned to incorporate it into the book. I can also remember his frustration over never seeming to find the time to write it. He was an exceptional homicide detective and much in demand. He often spent weeks away from home on some investigation or other. My family lived in West Cornwall but the Devon and Cornwall Constabulary covers a huge area; an investigation in Plymouth or Exeter would take him 90-150 miles away from his typewriter. No laptops back then, of course. 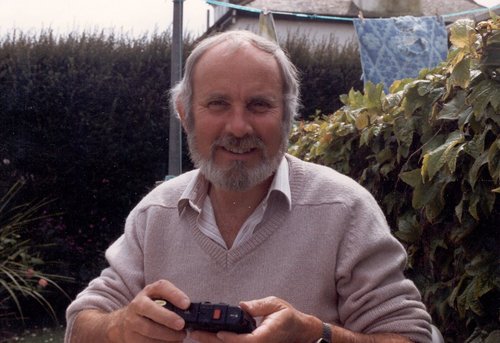 But then, in 1985, he suffered a massive heart attack. As he later wrote in an article: ‘Vigorous external cardiac massage and three jolts of enough electricity to resurrect Frankenstein's monster had been needed to return me to the land of the living.’ He was 45 at the time. He was to endure several smaller attacks over the next few years as his body tried to reject the damaged part of his heart. He also suffered painful arthritis of the spine and breastbone caused by the previously mentioned cardiac massage, and this kept him from doing too much.

It took several years for him to recover his strength but, by 1989, he was feeling stronger, he’d retired from the police, and now had the time and the energy to devote to his unwritten novel. But he was never to finish it. Dad suffered a final, massive heart attack in 1991 and died at the age of just 51.

It took a little while to sort out his affairs and part of that involved me going through a box of floppy discs that Dad had used to store work done on his old Amstrad word processor. I went through the files and converted his documents to a format which means that I still have them safely backed up and preserved for posterity to this day. But Dad’s novel was not among the discs and also wasn’t stored on his processor’s 256k onboard memory. What he’d written seemed to have been tragically lost.

But then, while sorting through some box files of material that Dad had accumulated while researching our family tree, my brother Si found some pages of notes relating to the novel and 24 printed pages of text comprising the first three chapters of the book. His notes seem to suggest that maybe this is how far he got. We'll never be entirely sure I guess but I'd like to think that everything he wrote has been saved. 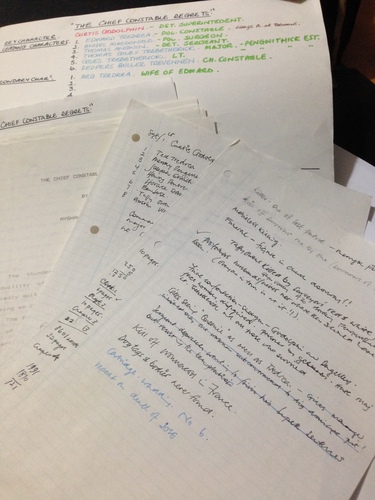 In the quarter century since he died many people have suggested to me that I finish it. Sadly, I have no idea how. There are no notes regarding how he imagined the plot to run and, while he left notes regarding the characters, I cannot be sure who commits the murders (although I have a shrewd idea). I wish I could remember the details of the discussions we had back in the 1980s. Sadly, too much life has passed me by since.

However, I thought it might be nice to incorporate several paragraphs from his novel in A Murder To Die For. I'm using his work as content written by Agnes Crabbe, the fictional murder mystery author at the heart of my book. At least then, in some small way, I’m commemorating a lovely man and a great dad. I'm also ensuring that he finally got his novel – or part of it anyway - into print.

And I don't have to pay him any royalties.

He’d have laughed at that.

Wonderful! a lovely tribute to your dad.