The truth is more boring than fiction

40% of the way there thanks to lovely, lovely you. But we mustn't get complacent; we're not even halfway there yet. The fight goes on!

Today marks the 100th day since I launched this crowdfunded book and I thought I'd spend our 'anniversary' looking at some of the common tropes and memes that turn up in detective fiction and cop shows which, to my knowledge, just don't happen in real life.

Because the plot of this novel takes place at a murder mystery festival, there is, naturally, a clash of cultures between my very procedurally driven cop characters and the fans, whose romanticised version of investigation is often at odds with reality. The differences between the two approaches are where much of the comedy comes from.

So, if you don't like suspending your disbelief, look away now. Or hide your nose in an Agatha Christie.

10 Things that don't happen in real life crime fighting but do happen in books, films and TV shows

There’s no such thing as a ‘police driving licence’; everything a cop does in a car at work is done on their own private licence. Yes, there are some concessions; a car on a designated emergency call can break speed limits but, even then, the driver has to be trained to the appropriate level of skill. Woe betide the humble panda driver who triggers a speed camera; the points will go on their licence.

I was a cop for 30 years and I never once saw a zip-up body bag despite seeing hundreds and hundreds of bodies. It may be that other police forces use them, but we didn't in London (which, you'd think, would maybe be the place most likely). The deceased was always respectfully removed from the scene of an accident or incident by ambulance or undertaker; worst case scenario in a coffin, but usually with a sheet or blanket draped over them. But that doesn't look as dramatic as the slow zipper pull does it?

How many times do you see cop cars smashing into the bandit or trying to box them in or ploughing through shopping malls, fruit stalls and oddly located piles of cardboard boxes? Er, no. You get a scratch on a police car and it quite often results in a suspension from driving. Tax payers’ money don’t you know. 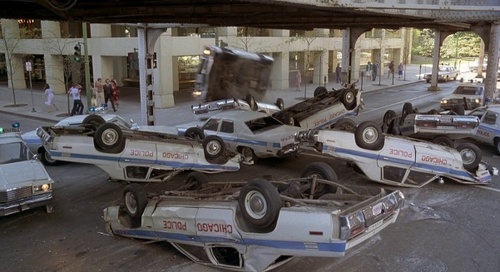 7 – Drawing a white line around the body

The only reason anyone ever did that was so that the body could be removed from the scene as soon as possible. Cops have cameras to record the position now. And have had for AGES.

6 - Identifying a body from dental records

There seems to be a misunderstanding here. Do crime fiction authors believe that there's a central database holding a copy of your, mine and everyone's teeth? Because there really isn't. Dental records are used to confirm the identity of someone when we already suspect we know who they are. That's a very different thing to identifying someone. But even then, identification is reliant upon good record keeping. Forensic dentist and author Mike Tabor has looked at cases where people have had tens of thousands of dollars worth of cosmetic dentistry done but who still couldn't be identified. 'Around 5,000 John and Jane Does are buried every year with lots of crowns and dental work', he says. And that's in the oh-so-perfect-teeth US of A. So next time you see a TV cop say - 'We found this crown - we can identify the manufacturer' - you have my permission to growl at the telly.

Oh shut up. Almost every car on the road is a computer on wheels these days. You'd need Moss from The IT Crowd to start a car that way.

You know what I mean … those wall boards in TV dramas covered in photographs and clippings from newspapers and maps and bits of red string joining everything up? It’s a lovely visual for TV but it's not something that happens in the real world where cops have computer databases and intelligence officers as colleagues. They might pin some photos to the wall. At a push. Even then, there's data protection to consider and you shouldn't really have suspects on display - people not yet convicted of a crime - that could be seen by possibly unauthorised people like window cleaners, electricians, IT staff etc. 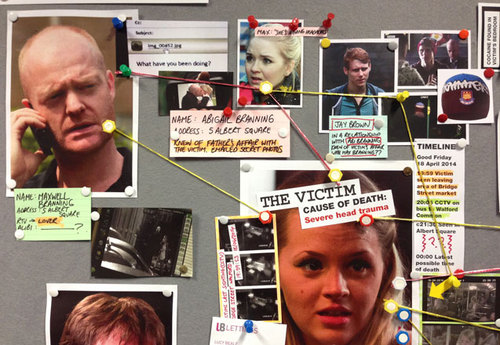 3 – Getting a police artist to draw the suspect

There hasn’t been much drawing going on for decades. Reconstructions became photofits in the 1960s using jigsaw-like pieces of varying facial features. Then, in the 1980s, it started to go electronic with e-fits. These days it’s all computer-based and the artistry involved uses a paint programme to add unique features such as moles and scars.

2 - Killing someone with a pillow

If you're feeling adventurous or have a good alibi - try it. Personally, I reckon it's pretty impossible unless you completely close off the nose and mouth somehow. Most pillows have enough air spaces inside the stuffing to allow you to breathe through them. Or you could turn your head sideways if you're conscious. But even if the victim is unconscious why go through the rigmarole of a pillow when hands will do a better job? And even if you did manage to do it with a pillow ... it isn't going to kill someone quickly. Most doctors I've spoken to reckon it would take between five and seven minutes. That's way too long for a 45 minute crime drama.

You’ll have seen this interviewing technique used a million times on cop shows. But, as every interview is recorded these days, such behaviour would suggest to the court that evidence was obtained under duress. And evidence obtained under duress in inadmissible at court. Cops rely instead on cognitive interviewing skills, common sense, and smart questioning. Who'd have thought?

How are your bubbles? All burst?

Sooo disappointed. Next you'll be telling us that technique that Death in Paradise's DI Goodman's habit of assembling all the suspects in one room once he has solved the murder doesn't happen in reality!

does that mean that poirot can't just sit in an armchair and let his "little grey cells" go to work without having visited a crime scene? i've suspected him of skiving off for quite a while now - he's officially busted :)

So right on many of these issues Stevyn, but as a crime scene photographer for the Met, there are 2 points I'd like to make.

We do have body bags now, and always use them at suspicious deaths but for years they were using plastic sheets and wrapping the ends like a giant white Quality Street toffee. The body bags are also used at Disaster areas, such as the Thai Tsunami.

Talking of which, the main identification for the Tsunami ended up coming from dental records as the DNA was destroyed in most cases. You are right of course, no database, and an idea of their ID has to be in place, but the dental records held by dentist were incredibly useful.

And police driving licences... Well, I had one in a sense. I had to take a test to drive for the Met, and had to get it checked every year. On the two times I had accidents, points were deducted from that licence, not mine... but then maybe I was lucky ;)

All good work though, and yes, Watching CSI or suchlike, makes me just want to turn the telly off. Good luck with your book, I'll take a look and excellent idea for keeping those pledges coming.

Colin - Ha! And don't get me started on those hatches in the ceilings of lifts ... have YOU ever seen one??

Cara - What can I say? Lazy old Belgian.

Mark - Thanks for the update Mark! As I say in the foreword to the book, one of the strangest things about retiring from the police is that, as soon as you're out of the door, it's like you were never a cop. I can't even read reports I wrote when I was a cop now without a Freedom of Information Act application! I've been out for six years now and, to be honest, I wasn't involved in crime investigation very much in my final years so I'm probably hopelessly out of dater with current practices!