It was a Dark and Stormy Night ...

I got invited out to supper last night on one of the worst nights of the year so far. The rain was lashing down, the wind was blowing a gale and the roads were covered with those scary big puddles where you're never sure which bit to drive through because you can't see any of the ruts or potholes under the surface. And there were plenty of those as the route to my meeting, greeting and eating place involved driving along a number of single-track country lanes.

I was going to a small and (in the day time) picturesque village, about seven miles from where I live, called The Lee. I don't suppose there are many English villages with the word 'The' in front - I know that Westward Ho! is the only one with an exclamation mark - but The Lee is one of them. Had I been able to see any of it through the driving rain, I'd be able to show you some pretty cottages, a lovely village green and pond, and a beautiful manor house once owned by the Liberty family, the people behind one of London's most iconic shops.

You may know that the Liberty store on the junction of Regent Street and Great Marlborough Street was built using timbers from two ships, HMS Impregnable and HMS Hindustan (the length of the store front was set by the length of the Hindustan). Well, there's another reminder of this fact as you drive into the village and are treated to the sight of the figurehead of HMS Impregnable, a sculpture of Lord Howe, looming out of the dark at you as you pass a house called 'Pipers', where the Liberty family still live. The Liberty influence is everywhere; store founder Arthur Liberty built new cottages, created the village green, sank a new well and maintained the village as part of his estate when he owned the manor. Here are a few photos I've gleaned from the internet (mostly from here) but I'll go back when the weather is a bit calmer and take some better ones (of course, if you come on the tour, you'll be going there!) 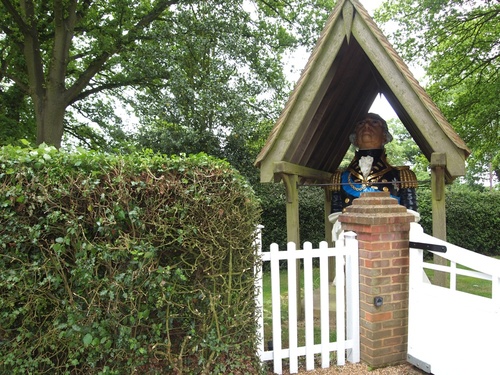 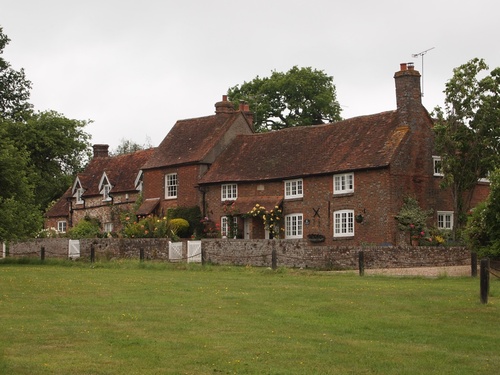 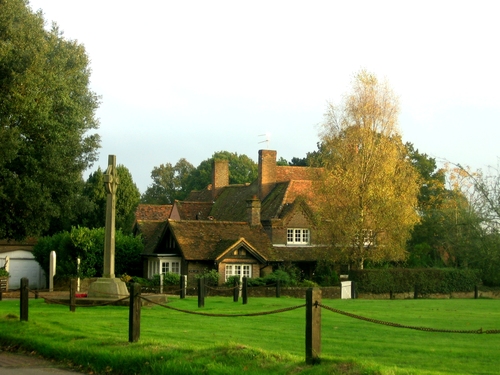 He also built a new pub for the locals, which is where I was eating.

The Cock and Rabbit Inn (The Carry On films couldn't have chosen a much better name), quite apart from being a pretty little village pub, is a very good Italian restaurant with portion sizes that are huge for the price. But the very best thing about the pub is that it is almost unchanged since the 1970s. While other pubs have installed giant plasma screens, loud music, stainless steel beer engines and video games, this place has patterned carpets, dark oak panelling and brass fixtures, insanely decorous tablecloths, and a log fire. It's amazing. 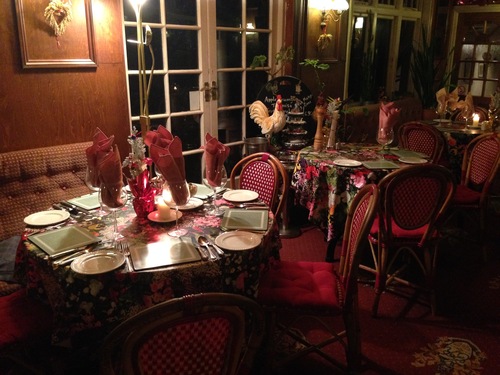 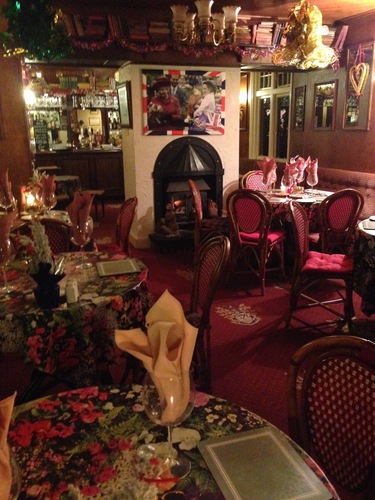 The photos don't do it it justice I'm afraid as it was low light and the flash washed it out horribly. But you get the gist I hope. Anyhow, fantastic food and wonderfully friendly hosts - I coudn't have asked for a nicer evening out.

But there was a little extra treat in store for me. I knew that The Lee, like many villages in this area of South Buckinghamshire and Oxfordshire, has appeared in more than a few episodes of Midsomer Murders. As the owners of the pub, Franco and Victoria joked, 'It's a miracle we have any customers left'. The pub has featured in several (and will appear again in an episode of the new series in January 2016 called 'Saints and Sinners') and has a Midsomer memorabilia wall! There are signed photos of the stars, props and posters and leaflets and even some pages of script. For a murder mystery fan like me, it was a delicious visual digestif to an excelllent meal.. 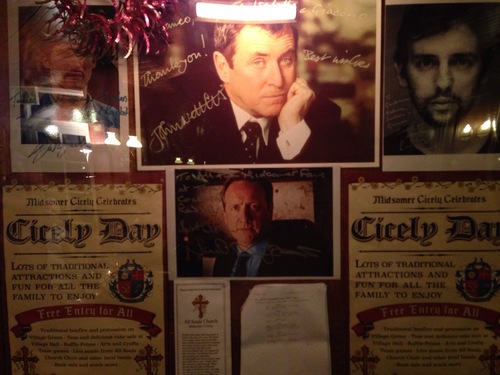 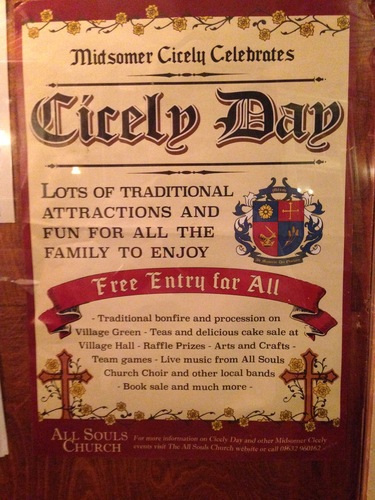 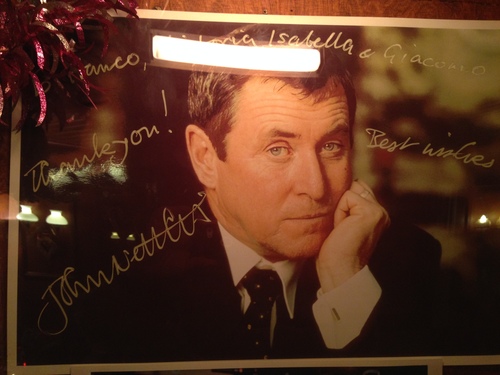 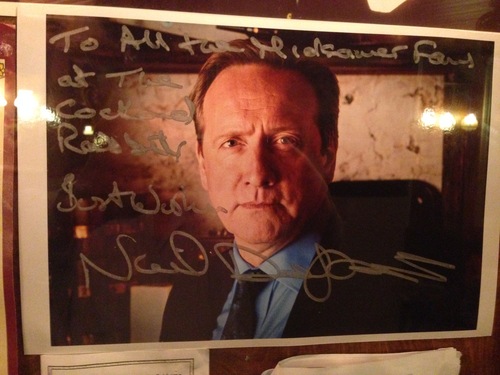 I knew that The Lee was used as a location but I had no idea that the pub had this great display. But my good friend Hodge, with whom I perform the occasional folk gig, did know, which is why he invited me out. He also knew that in A Murder To Die For, my fictional village of Little Hogley has a pub that has become a kind of shrine to the crime author at the heart of my book - Agnes Crabbe - and her creations, including a popular TV series based on her books.

I will now have The Cock and Rabbit Inn very much in my head as I'm writing the pub scenes.

Funding hit 15% yesterday, which is wonderfully encouraging. I know it'll be a long, hard slog to gather in the remaining 85% but I am determined to do so. Please keep telling everyone you know about the book - it's going to be a fun read.

Oh, and if you use the discount code FESTIVEREADING before the end of 31st Dcember, you can get a massive £10 off every pledge! That means a paperback for a fiver or a signed copy for £15. Why not pledge for a second copy as a pressie while it's cheap?

I did see yesterday that a number of people used the £10 off code to pledge at the e-book level, meaning that they'll get it for free. What I say is this - had you spent it at the £15 level, you'd get the physical paperback AND the e-book free! So why not double the reward by spending a fiver?

Well, it's the 23rd of December so I'm pretty sure that this will be my final shedpost before Christmas, and maybe for this year. So can I say a huge, warm thanks to everyone who has subscribed so far, and also good wishes to those of you I hope to persuade to become patrons of this book in the next few months. It's an exciting new step for me, to move from non-fiction to fiction, but I'm loving every minute of it.

Have a fantastic Christmas and a very happy New Year.