In the doldrums without a paddle

Welcome to the doldrums, that patch of calm water in which our crowdfunding ship finds itself.

In case you didn't know, 'doldrums' does have a nautical origin: ''The doldrums refers to those parts of the Atlantic Ocean and the Pacific Ocean affected by the Intertropical Convergence Zone, a low-pressure area around the equator where the prevailing winds are calm. The doldrums are also noted for calm periods when the winds disappear altogether, trapping sail-powered boats for periods of days or weeks.' (Wikipedia)

You see? Every day is an education.

These days we use it colloquially to describe a period of frustration and stagnation when nothing happens. And like the very real doldrums that plagued mariners, crowdfunding can suffer from it too.

My book has now been on Unbound for 116 days - or around four months - and it's 41% funded. But that doesn't mean that I'm hitting 10% of pledges every month. Here's a graph showing how the pledges have gone so far: 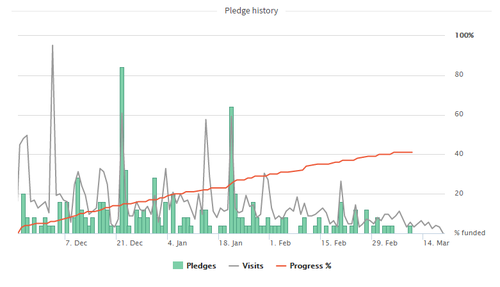 As you can see, there is a fairly constant level of pledging with occasional peaks, most notably just before Christmas (when I assume that everyone was filled with good cheer and/or good beer) and mid-Jan (When Unbound featured the book in its weekly e-mail newsletter). But there are slightly less happy peaks too; the grey line shows visits to the book's page and, as you can see, there have been some quite high spikes which, sadly, didn't lead to the decision to pledge. If everyone who had a gander in early December had parted with a few pennies I'd be way further on than I am!

And then there's March. Oh dear. As you can see, pledges began to get sporadic and, for the past few weeks have been all but absent despite my constant hammering on about the book on social media. Why has this happened? I have no idea. Such are the vagaries of human behaviour. I don't think it's necessarily any kind of 'Ides of March' quality of this time of year. Plenty of other Unbound books that were launched after mine have gone swooshing past and have hit their 100% targets.

No, it has to be about my book or the way that I'm trying to get people to believe in it and to commit a few quid.

So here's the question ... how do I get out of the doldrums? Our sailor chums wouldn't just have sat there becalmed until the food and water ran out; they'd have grabbed an oar each and rowed themselves out of the area.

So what 'oars' can I use? How can I persuade people that they need to read this book?

Heave away, me proud buckos, wi' a curse.

**Not said through gritted teeth at all.

As a newbie to all this I'm finding the whole crowdfunding business fascinating... And immensely frustrating! The engagement is what makes it interesting on the whole. Although I'm constantly surprised by who will pledge and who won't and the reasons sometimes given by those who don't. Had a exchange with someone only today who wailed 'what's in it for me' (apart from the book, of course) and claimed to be agin crowdfunding on principle as the investor wasn't guaranteed a return. I tried explaining but it was a lost cause. On the other hand I had a message from someone supporting the book but - being unemployed - apologising or being unable to pledge. Yet later on I saw her name on the supporters list... the widow's mite indeed!

Hi Tim! Yes, crowdfunding is a world of highs and lows. Unbound was set up as a wonderful, democratic alternative to traditional publishing models that, sadly, in recent years, have become obsessed with celebrity and locked into a 'we'll only invest in things that are guaranteed to sell' way of thinking. It's a malaise that has spread across all aspects of the creative sector from publishing to advertising to TV commissioning. The accountants have taken over the asylum and anything left field, original or different is treated with suspicion because there are no handy market research stats to compare it to. That said, it has also spread to the public to some degree; just watch as a book written by someone famous - even if they've never written a book before - whizzes towards 100% funded. It makes it so much harder for the non-famous crowdfunders (like me) to keep up the enthusiasm to pull the punters in. I admit it, the constant begging does get me down. It is pretty much all on me to sell the idea of my book to my potential audience because Unbound are creating so many new books that they cannot give any kind of sustained support to individual authors. But, when you balance all of that against the good things about crowdfunding, good wins every time. I love the interaction with readers. I love going out and meeting them and doing talks to drum up pledges. I treasure their encouragement and I try to involve them as much as possible in the writing and editing process. And, of course, every pledge means that someone is saying 'I believe in what you're doing'. Every pledge is a pick-me-up and helps me to forget the mountains of rejection letters from unimaginative, money-obsessed publishers that I've had over the years. :)