I'm jolly for Alice ... and Crowdfunding

A couple of days ago, the wonderful Alice Jolly won the PEN Ackerley Literary Prize - against some stiff opposition - for her memoir Dead Babies and Seaside Towns. The book was crowdfunded by subscribers to Unbound. As Alice said in her acceptance speech:

'It isn’t just my book, [it’s the book for all those people] who had the nerve to come forward with their money to say ‘yes we believe in this book’.

'In a world where it’s all about book sales, literary prizes are one of the few ways in which we can say ‘actually a book didn’t sell so well but its an important book so we need it’, so literary prizes are incredibly important for that reason. Unbound published this book when nobody else would … they stuck by this book all the way and believed in it when other people didn’t.'

Anyone who still claims that crowdfunding isn't 'real' publishing needs to look at Unbound's track record in their five years of existence ... several Number 1 bestsellers, a Man Booker Prize nominee, the Bookseller Book Of The Year prize ... 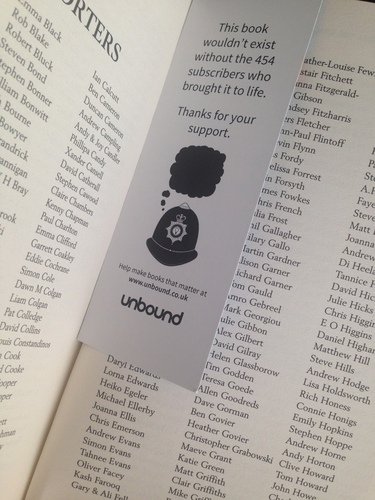 My most recent book, Why Did The Policeman Cross The Road? was also published with Unbound. But, more importantly, it was published because 454 subscribers helped to bring it to life by believing in it.

My next book is now 68% funded. It currently has 325 subscribers and needs just 200 more (or fewer if people pledge above the lowest £10 level).

Can you help to make a new book happen?

And, meanwhile, HUGE congratulations to Alice on her well-deserved prize. Here's a link to her wonderful book.