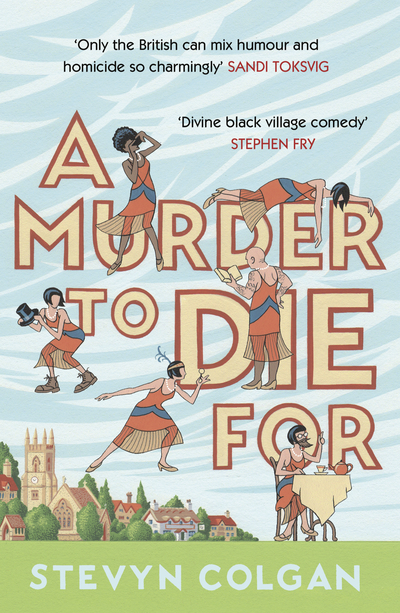 Crime | Fiction
You made A Murder To Die For a reality. It's available in all good book stores now.
$8
116 pledges

An invite to a murder mystery-themed launch party hosted by the author, plus signed 1st edition paperback, and ebook edition
$150  + shipping
7 pledges

Lunch and a tour with Steve around the villages and sites that inspired the book in Bucks and Oxon (including Agatha Christie’s grave), plus signed 1st edition paperback, and ebook edition
$225  + shipping
4 pledges

Lunch and a tour with Steve around the villages and sites that inspired the book in Bucks and Oxon, plus two tickets to the murder mystery-themed launch party hosted by the author, signed 1st edition paperback, ebook edition
$375  + shipping
8 pledges

Name a character in the book after you or a loved one, plus two tickets to the murder mystery-themed launch party hosted by the author, plus signed 1st edition paperback, ebook edition and your name in the back of the book

‘Stevyn Colgan bestrides the territory of English rural comedy, one foot on the throat of Joanna Trollope, the other knocking the bonnet of Miss Marple off her silver head.’ - STEPHEN FRY

How do you solve a murder when hundreds of wannabe detectives all have the same goal?

Every year, fans from all over the world descend upon a tiny picturesque English village to celebrate the life of the enigmatic author Agnes Crabbe and her fictional lady detective, Miss Millicent Cutter.

Crabbe fans are quite obsessive; the majority turn up to the festival dressed as Miss Cutter. Spats between rival fan clubs are not uncommon. But when one of the most prominent superfans is murdered on the first day of the festival, the police find themselves trying to solve a crime in which the victim, witnesses, almost everyone in the village, and even the murderer, are all dressed as Miss Cutter. And most of them are also trying to solve the murder …

In this darkly comic farce, the worlds of classic detective fiction and real-life homicide investigation come crashing together with hilarious and occasionally messy results.

Stevyn Colgan spent 30 years as a police officer. But now he’s one of the writers of the award-winning TV show QI and its sister show on BBC Radio 4, The Museum of Curiosity. In A Murder To Die For, he brings his sense of humour and his policing experience together to create something that is definitely not your average murder mystery.