A Murder Of Crows

A Murder Of Crows: The First Edit... 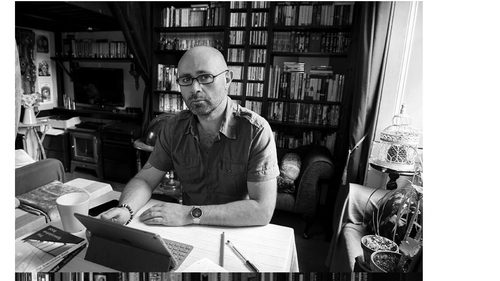 It's pouring down with rain in Glasgow today but I've been keeping very busy with various projects related to A Murder Of Crows and a few unrelated writing projects too.

The first edit is now complete. As a result I think the book is now much more robust and realistic, with some additional input from not one, but two, detectives. My editor's suggestions were such that I've changed some of the relationships between characters and made some adjustments to the timeline. I've also added some brand new supporting characters and the overall effect is a much more grounded novel, but hopefully still as exciting!

The front cover is almost complete. I wanted an image that was stark, bold, haunting and atmospheric, and designer Mark Ecob has come up with exactly that. It will make a great print for those of you who have pledged at that reward level - you won't be disappointed! I'll unveil it at a later date.

Above is an author shot taken by award winning photographer Pablo Llopis. One of his photos will grace the back cover of the book. I think he's done a great job and has made me look very studious!

I did a reading from my novel in Dumbarton, which went very well, and whilst there I met crime writer Alex Gray, who suggested I enter for a competition. More on that at a later date.

Whilst on holiday in Malta I did some more writing. I promised myself I wouldn't but I couldn't help myself. Suffice to say, there are some new projects in the pipeline.

Lastly, I met with one of my patrons from America and had the pleasure of taking her on a guided tour of some of the places in and around Glasgow that are featured in the novel. I had a lovely time with her family and she presented me with a homemade mug which I was drinking my peppermint tea from only this morning! I was very touched by this kindness and it always amazes me how someone can be a total stranger one moment and then the next, a friendship is forged.

Thank you for your continued support and please spread the word!